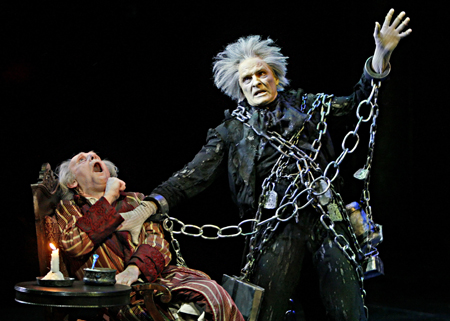 Courtesy of Guthrie Theater
The Guthrie’s “A Christmas Carol,” which is nearly sold-out this year, provided about 16 percent of the theater’s earned income in 2006.

It’s that time of year again. Time for “A Christmas Carol” and giddy shows whose titles riff off the classic Dickens tale. For “Nutcracker” productions, which seemingly proliferate as abundantly as springtime bunnies. For goofy holiday-this, ribald Xmas-that, and even religious retellings of the birth of the kid.

It’s also that time of year when the Scrooges among us — those who would really rather see a Bertolt Brecht play or a William Forsythe ballet — must withdraw our talons and submit to the treacle of the season. After all, as everyone knows, arts organizations only produce these shows — for the umpteenth time! — because they’re cash cows. Right?

While some nonprofit groups — especially smaller ones — depend a lot on holiday productions to support their annual budgets, others say they are break-even affairs and more about observing community traditions and expectations. Still, most agree the seasonal programs help build their brand and audience.

For the Continental Ballet Company, ticket revenue from director Riet Velthuisen’s nonviolent “Nutcracker” (the rats aren’t the battling kind; they’re the benevolent kind) supplies 40 percent of the company’s almost $200,000 annual budget, says assistant director Genevieve Spooner. Does that money help float the company, based in the Bloomington Center for the Arts, through its fall and spring shows? “Yes, we do depend on it,” she says. The show is now in its 19th year.

Still, she says, it’s “our most profitable show” of the year. “When we look at the things that will bring in the most money and promote our company and our school, ‘Nutcracker’ continues to be one of those things year after year.” The production brings in about $250,000 annually.

But after 43 years, she says, the show doesn’t net a lot of extra dough. Most of the money goes toward the State Theatre rental and paying the live orchestra. So, why do it?

The show, which features up to 70 students from MDT’s school, “is a draw for the school,” she says. The Dance Institute brings in about $484,000 in revenue annually from tuition to support the organization’s approximately $1.4 million annual budget.

“So, in other words, audience members who might attend Clay Aiken’s performance may not have been to Orchestra Hall previously to hear a Mahler symphony, and we welcome the opportunity to introduce them to the orchestra,” Pappas says. But, she adds, “holiday ticket revenue is a relatively modest part of our overall income for the year. This year’s holiday concerts, for example, are budgeted to net less than 1 percent of our overall budget.”

MDT’s “Nutcracker,” Pilakowski says, also is “an audience builder and a brand builder” for the ballet company. “But the biggest reason we do it is tradition. I’ve heard that it’s the longest-running ‘Nutcracker’ and longest-running arts event in Minnesota. It’s an expensive production that has a legacy and tradition we feel compelled to continue. That’s the world of nonprofits.”

Welcome to the world of nonprofits
“Why do we do anything?” says Gary Peterson, executive director of James Sewell Ballet. “We lose money on everything we do. Anytime you need contributed income to balance your budget, you’re losing money on your operations. It’s the 501[c]3 model,” he says. “All of us, including the orchestras and large theaters, are public trusts. We’re here to provide a service. That’s the ultimate thing to keep in mind when people talk about the arts running like a business; if we ran like a business, we’d be out of business.” 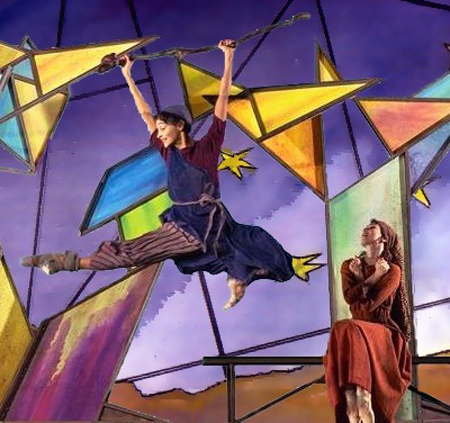 For 12 years, JSB has co-produced (with the St. Paul Chamber Orchestra) or self-produced (using taped music) “Amahl and the Night Visitors.” Based on a one-act opera composed by Gian Carlo Menotti for NBC-TV in 1951, James Sewell’s version of “Amahl” blends ballet and American Sign Language in the story of a little boy, his widowed mother, and three kings on their way to Bethlehem.

“Amahl” anchors JSB’s season, Peterson says. “It’s nice to have that touchstone for audiences.” But the show “is not an audience builder,” he adds. “Over time, a chunk of our non-holiday or repertory audience will come to see ‘Amahl.’ Conversely, of all the people who’ve seen James Sewell Ballet in the last 15 years, most of them have not come to ‘Amahl.'”

Spooner says Continental Ballet Company has seen the same behavior. “Why doesn’t everyone who goes to the ‘Nutcracker’ during the holidays go to the ballet during the rest of the year? It’s sad that sometimes people think that’s enough culture for the year.”

Unlike other dance companies and theaters in town, Brave New Workshop doesn’t solicit grants, foundation money or donations to make up for lost income. “Because of our emphasis on political and social satire,” says artistic director Caleb McEwen, “we don’t feel comfortable going after government or foundation money.” Instead, BNW, which has an average annual budget of $2 million, has a corporate-services division that provides “the vast majority of our revenue,” he says. “That’s how we’re able to run a theater without taking tax dollars or grant money.”

Corporate-services revenue supports both the theater and the Brave New Institute, the company school. Still, BNW’s satirical holiday shows, in existence since 1987, “are our most popular and well-attended shows during the year,” McEwen says, and bring in 25 percent to 35 percent of annual ticket revenue. Given ticket sales so far this month, he says, this year’s “Stuck in a Manger with You; or Carol On, My Wayward Son” “will be the best-selling Christmas show on record.”

“Doing a holiday show is extremely important for the theater. Our audience demands it,” he says. “But if we didn’t do a Christmas show, or did something else in its place, it probably wouldn’t hurt the workshop, because we rely so much on our corporate-services department to make up whatever we don’t sell in tickets.”

Mixing it up
Stages Theatre Company also offers different holiday fare from year to year and brings back sure bets. This year, “Madeline’s Christmas,” based on the popular books about the little French girl, is again featured with a cast that includes professional adult actors and children from the organization’s education program.

The show “holds the record for the highest attendance and highest revenue in the history of Stages Theatre Company,” says artistic director Sandy Boren-Barrett. “It brings in about 24 percent of our $1.6 million budget in ticket revenue.” But, she adds, “We have other shows in our season that, frankly, come pretty close to ‘Madeline’s Christmas’ in revenue.”

The same holds true for the Guthrie Theater‘s annual holiday production, now in its 33rd year, of “A Christmas Carol.” The show is a “substantial revenue goal” for the organization’s $26 million annual budget, says Trish Santini, external relations director, and will bring in “16 percent of our earned income this year — which means revenue from our box office only.” But the show “is not alone in that category,” she adds. “‘1776’ had an even higher goal, because it was an eight-week run” as opposed to “A Christmas Carol’s” six-week run.

“We do it because it’s not just our tradition, it’s the community’s. When people establish what the holidays mean for them, and if ‘A Christmas Carol’s’ been a part of that for several years, we want to honor that,” Santini says. “The relationship to the community is critically important to our institution and with our transition into the new building, it’s an enormous through-line for people to have that kind of continuity.”

Another telling indicator of the show’s popularity: The Guthrie just added a Dec. 30 final performance because the run is essentially sold out.

Vickie Benson, arts program director at the McKnight Foundation, agrees that local audiences would be disappointed if holiday staples like the “Nutcracker” or “Amahl,” “A Christmas Carol” or Penumbra Theatre Company‘s “Black Nativity,” now in its 20th year, didn’t exist.

“In general, more of the population looks for something to do around the holidays, so these shows do attract attention to organizations — especially smaller arts organizations — that might not otherwise attract that attention. And perhaps, that brings them back in the door for other shows,” Benson says. “For that reason alone, it’s a good idea for small and mid-sized organizations to produce holiday shows.”

What if the Guthrie elected not to produce “A Christmas Carol” one year? “It wouldn’t cripple us financially,” Santini says, “but it wouldn’t be a smart choice. There’d be a void in terms of our community relationship. In terms of replacing it with something else? What would we replace it with that would be appropriate? If you’re going to run performances during the holiday season, it doesn’t make sense to have content that isn’t holiday-oriented.”

Then, she adds with a laugh, “It would be very Scrooge-like of us to make it go away.”

Camille LeFevre writes about dance for an array of regional and national publications, including MinnPost.