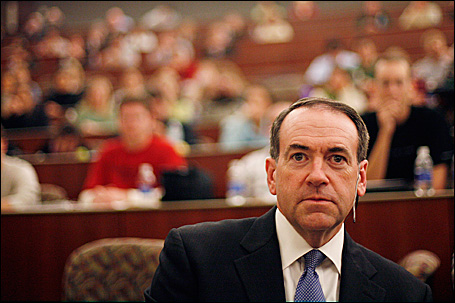 With plenty of ground to make up before next month’s Iowa caucuses, Mitt Romney said Thursday that he wouldn’t rule out running a TV commercial attacking Republican front-runner Mike Huckabee for his part in paroling a rapist who left prison and murdered one woman, and perhaps another.

Asked on Fox News if he was planning to run such an ad, Romney replied, “You know, time will tell.”

The former Massachusetts governor called the issue “instructive” and “very telling” of Huckabee’s attitude toward prisoners. As governor of Arkansas, he commuted the sentences of 1,033 inmates, including 12 murderers, Romney said.

Romney’s remarks triggered memories of one of the most notorious episodes in U.S. political history. In the heat of the 1988 general election campaign, Republican George H.W. Bush ran a commercial ridiculing his opponent, Michael Dukakis, for a weekend furlough program in which one prisoner, convicted murderer Willie Horton, committed armed robbery and rape. The ad was effective in casting the Massachusetts governor as a liberal who was soft on crime.

Romney used the “L-word” Thursday to describe Huckabee, something of a stretch given the Baptist preacher’s stance on social issues. A better analysis might be that, as governor, he fell under the spell of fellow evangelical Christians eager to believe that prisoners who claimed to have had a religious conversion ought to be set free. It’s one of the most common scams perpetrated by those behind bars. But Wayne DuMond, the prisoner in question, must have been an excellent practitioner of deception. His life story reads like a southern Gothic novel.

In 1972, he dodged a murder conviction by testifying against two buddies who beat a man to death in Oklahoma. On the stand, DuMond admitted he had taken part, wielding a claw hammer. The next year, he got probation for molesting a girl at an Oregon shopping mall, then avoiding a rape conviction in Arkansas by alleging that police had coerced his confession.

Commuted sentence
But in 1985 he was convicted of raping a 17-year-old cheerleader who was a distant cousin of then-Gov. Bill Clinton. After supposedly castrating himself in remorse, DuMond won a $110,000 lawsuit against a local sheriff, who had displayed DuMond’s testicles in a jar on his desk. That incident helped persuade then-Gov. Jim Guy Tucker to commute DuMond’s life sentence to 39 years, making him eligible for parole.

As Huckabee become governor in 1996, a close friend and fellow pastor, Jay Cole, had become DuMond’s spiritual adviser. He and others, many of whom had become convinced of DuMond’s innocence, told the new governor that DuMond had “found the Lord” and should be set free. Huckabee decided against commuting his sentence but instead urged the parole board to let him out. Huckabee claims it was the board’s decision. But, according to a detailed account in the Los Angeles Times, Huckabee leaned on the board, and the board acquiesced. DuMond then moved to a Kansas City suburb where, in 1998, he smothered to death Carol Shields, a mother of three, and may also have killed Sara Andrasek, who died about the same time by similar means. DeMond died in prison in 2005. All of this is best told by Richard Serrano, writing in the Los Angeles Times. Or, for the original reporting work in this, check our Murray Waas’ 2002 piece in the Arkansas Times.

These and other reports suggest another dimension to the story, however: a suggestion that Huckabee’s actions were also tied to a network of people who had a pathological hatred of the Clintons. This has been a long-running theme in Arkansas politics.

‘Aversion to truthfulness’
In any case, the dredging up of the DuMond epic testifies to what happens in American politics when a presidential candidate vaults into the lead, as Huckabee has in Iowa: unflattering stories begin to appear. Sean Hannity and Kirsten Powers tied Huckabee in knots on the issue earlier this week. And veteran journalist Ernest Dumas of the Arkansas Times offered a dark and lyrical analysis of Huckabee’s ascendance.

“Mike Huckabee has a serious aversion to truthfulness,” Dumas wrote, “and this year it has got worse, not better, outside the confining tethers of home where people are a little familiar with what he has done … When he was called on freeing the murderer and rapist Wayne DuMond he said he strongly opposed DuMond’s parole and blamed it on Bill Clinton and Jim Guy Tucker. The accounts of parole board members and his own aide who accompanied him to a closed meeting and his own prepared statement on the day of the parole and his letter to DuMond put the lie to the claim.”

Dumas continued: “Huckabee can make a case that he is doing the work Jesus would do. While he has always talked Republican conservatism, he used his tax-raising and clemency powers as governor to help the poor, the sick and the aged and to befriend people in prison, as Jesus cautioned his disciples to do ‘for the least of these’ if they wanted to go to heaven. As the Associated Press reported this week, the governor exercised his clemency power for killers, rapists and other felons far more than his three predecessors combined and probably more than the previous six governors, none of whom had preacher confidantes to tell them which cons deserved redemption. Until very recently Huckabee also was more or less kind to immigrants, and almost everyone else but gays, newspaper reporters, women who wanted an abortion and ‘wacko’ environmentalists.”

Huckabee’s attempt to deflect all of this was apparent in his exchange with Hannity and Powers on Fox News. “But let me be honest,” he said. “We all feel awful, horrible about what happened. Nobody can sit back and act indifferent to the fact that a person, an innocent person, was murdered by one who got out of prison. And rather than point blame — and I’ve often said if somebody wants to hold me accountable or responsible, they can certainly feel free to do so. Nothing any of us are going to say is going to bring her back.

“… But you know what? It’s not about me. It’s about the people who were murdered. And I just regret that people take the horrors that have happened to these women, and the next thing you know, it’s become the political weapon of choice. Do we not have any decency left in this country when politics has become nothing more than an attack, an attack, whether it’s Bill Clinton or anybody else.”