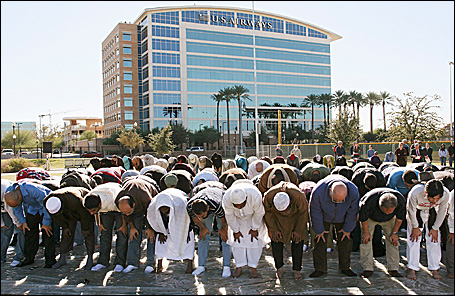 REUTERS/Jeff Topping
Muslims and members of Interfaith Groups gather for a congregational prayer service and rally in a park opposite US Airways headquarters in Tempe, Ariz., on Dec. 1, 2006, following the removal of six imams from a flight at MSP.

Minneapolis-St. Paul International Airport has had its share of high profile legal disputes in the past year or so. Last summer there was the toe-tapping Sen. Larry Craig, and before that the six imams who were thrown off a U.S. Airways plane after praying in the boarding area.

While the Craig story is more titillating, the case of the imams has potential to reach well beyond MSP. If it results in a court decision, the case has the potential to set precedent that would affect all airlines, airports and passengers. But it will be years before there’s a decision, if there’s one at all.

When U.S. District Judge Ann Montgomery recently declined to dismiss all the claims made by six imams who were removed from the plane in November 2006, she merely agreed that the imams could continue with their case. That’s a long way from victory — or defeat — for the imams, the airline or the Metropolitan Airports Commission, another defendant in the case.

Montgomery’s decision means that both sides will spend the next year or so questioning everyone involved with the incident. Once the parties in the case have gathered as much information as they can, odds are good the airlines and the MAC will ask the court to rule that the imams have no case. If the judge agrees, the lawsuit is over. If the judge disagrees, there will be a trial. That decision could take another six months to a year. Of course, anywhere along the line both sides could settle, which would mean the throngs of people watching this case will be denied the opportunity to debate the juicy details in blogs and during dinner parties.

Odds are they will settle, according to Barbara Lichman, managing partner with Chevalier, Allen and Lichman, a Costa Mesa, Calif., firm that represents airports and municipalities surrounding them.

“It’s my opinion that because airlines use federally funded facilities, they are under the constraints of the U.S. Constitution,” she said. “The imam’s religious liberty was violated. I think there is a constitutional issue here that will go against the airlines and the airport. The airlines will settle rather than let a precedent be set.”

According to Lichman, there have been cases where people have been denied passage on airplanes because they looked Arabic, or spoke Arabic. Because the airlines and plaintiffs reached a settlement the cases dropped from the public eye, she said.

‘This would be a landmark’
Settlements in cases like this could run to several hundred thousand dollars for each imam, she said.

“I don’t see where there was any real threat to the personal security of the passengers,” she said. “But it’s never risen to the level of throwing somebody off a plane for praying,” she said. “This would be a landmark.”

Unless the imams weren’t praying but making threatening statements about President Bush, as has been claimed. “That would be different,” she said.

While we wait for a resolution, the papers that all three sides have filed so far can be plumbed for insights that haven’t surfaced previously.

According to the court documents, five imams from Arizona and one from California were in Minneapolis in November 2006 for a conference of North American imams. After checking in at MSP and passing through security, the imams arrived at gate C9 at about 3:45 p.m. for a return flight to Phoenix. As the sun was setting, three imams said an early evening prayer, while the other three watched over their carry-on bags. The three who did not pray said they saw an older couple watching intently. The older man made a cell phone call, the imams said.

Just before 5 p.m. passengers began boarding U.S. Airways flight 300. One of the imams, a Gold Member in the airline’s frequent flier program, upgraded to first class, sitting in the first row. The other imams were seated throughout the plane. One fell asleep for half an hour. When he woke up he noticed a police car on the tarmac next to the airplane. Two MAC police officers and an undercover MAC officer boarded the plane, spoke with a flight attendant in the kitchen then asked the imams to deplane.

38-page complaint
In March the imams sued the airlines, the MAC and “certain John Does,” the passengers who passed a note to the flight attendant expressing concern about flying with the imams. Nine days later the “John Does” were dropped from the case, because suing them caused a “huge public relations backlash,” according to Gerald Nolting, a Minneapolis attorney who represented a passenger who reported the imams. That passenger remains silent to this day.

The suit continues against the airlines and the MAC. The imams say they were thrown off the flight because of their race and religion, not their actions.

“These allegations, if proven true, could amount to extreme and outrageous conduct,” Judge Montgomery wrote.

While the imams filed a 38-page complaint, the airline’s request to dismiss the case was a skimpy two pages. But the statements from the pilot, flight attendant and managers shed more light on how and why the imams were ordered off the plane.

Captain John Wood said that about 10 minutes before the plane was about to take off, flight attendant Terri Boatner brought him a handwritten note that a passenger had given her. The note said that before boarding six men of Middle Eastern descent were seen in the terminal together saying, “Allah, Allah and cursing the United States’ involvement with Sadaam.” Wood called flight attendant Kevin Kelly to the cockpit and asked him whether he had seen anything unusual. Kelly told him the imam who had been upgraded to first class had several times returned to coach to talk with two other imams. Two of the imams asked for seat-belt extenders, which airlines often give to passengers who are too big to fit in the seat without them. Kelly said he gave them the extenders even though it looked like one didn’t need it. Neither Kelly nor Wood said why this was suspicious.

Then Wood learned from a system customer service manager, Danielle Manning, who was in Phoenix, that three of the men were traveling on one-way tickets. But the imams’ complaint is clear that all six men had bought round-trip tickets. Manning’s statement in the court records clears up that discrepancy by saying she realized after the fact that because two of the men were late for their flight and then rebooked, it appeared that they were flying on one-way tickets.

But as far as Wood knew, three were traveling on one-way tickets. That, plus the request for seat-belt extenders and their movement about the cabin and the note about “anti-U.S. comments,” led Wood to deny them transportation. Theoretically, extenders could be used as weapons.

Judge Montgomery was not impressed with Wood’s reasoning. “Whether these facts would lead a reasonable person to conclude that Plaintiffs were committing or about to commit a crime such as interfering with flight crew members and attendants is doubtful,” she wrote.

Difficult position
And finally we come to imams’ complaint that U.S. Airways refused to rebook them on a flight back to Phoenix. Manning clears that matter up, too. She said she and U.S. Airways MSP Station manager Penny Breedlove decided they could not be rebooked because the airlines had not been told by law enforcement that the imams had been cleared to travel.

The airlines are in a tough position on this one, according to Robert Vischer, an associate professor at St. Thomas Law School who specializes in questions of religion and public policy.

“There are no easily articulated characteristics that can serve as a fool-proof measure to keep terrorists off airplanes,” Vischer said. “Since 9/11 everyone has been scrambling to not make mistakes. If the airline is found liable, it will cause the other airlines to come up with consistent characteristics that don’t turn on looks or religion.”

Judith Yates Borger reports on legal affairs, science and other subjects. She can be reached at jyatesborger [at] minnpost [dot] com.