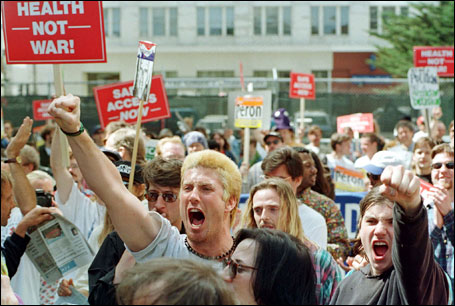 The bill to allow the medical use of marijuana for chronically and terminally ill patients has had a strange ride in Minnesota. It narrowly passed the DFL-controlled Senate, survived four committee votes in the House but now languishes in that chamber after losing one of its most passionate advocates, former House Speaker Steve Sviggum.

Sviggum has moved on and Gov. Tim Pawlenty remains opposed, but the bill’s backers insist it still stands a good chance of passage in 2008.

When the session cranks up in February, those who want Minnesota to become the 13th state to legalize medical marijuana will again push legislators, many of whom have concerns that a vote for the measure could be used against them in the next election or could lead to drug abuses.

“I can’t tell you the number of legislators I’ve talked to who told me they supported it, but they can’t [vote for it] because they’d be perceived as being for drugs and against crime,” said Sviggum, one of the highest-profile sponsors of the 2007 legislation.

Sviggum, a conservative Republican, resigned his House seat earlier this year when Pawlenty, a close friend, appointed him commissioner of the Department of Labor and Industry.The appointment effectively muzzled Sviggum’s open support for medical pot because it flies in the face of Pawlenty’s position.

“I’m on a different team right now, and this is certainly an issue that is not in the realm of my department,” said Sviggum, who was speaker from 1999 until Republicans lost control of the House in 2006.

The issue is in the realm of Michael Campion, commissioner of the Department of Public Safety.Campion has extensive experience in law enforcement and close ties to the enforcement community.That community, said Campion, has problems with the bill, some seeing it as an avenue to illegal drug use.

Campion has his own list of problems with the bill, including his view that the issue should be addressed federally, not state-by-state.

“Somebody who has a terminal illness, do we [in law enforcement] really care if they smoke marijuana? I don’t think we do. But that doesn’t mean you legalize it.”

Using a small amount of marijuana for personal use now is a petty misdemeanor, the same as a parking ticket, and not a crime.

‘Tremendous progress’
That’s not good enough for Tom Lehman, a lobbyist for health care organizations, including the Marijuana Policy Project and Minnesotans for Compassionate Care.Supporters want pot to be legally grown under controlled conditions that would include licensing and inspection, said Lehman. And they want it available to a limited number of the chronically ill through prescriptions from doctors.

Sviggum came to believe in medical marijuana within the past three years. As speaker of the House, he had visits from two legislators from other states who had lost spouses to cancer. Regular painkillers didn’t work for the ill loved ones; pot did. Sviggum researched the issue and said it was a comfortable fit with his political philosophy — that the bill empowers doctors and patients to make decisions, rather than government. So he became an advocate.

What about abuses in California, which has a medical pot law? Recently the CBS program “60 Minutes” documented the ease with which many without a medical need could get doctors for a price to write prescriptions.

Supporters acknowledge the California law is not drawn tight enough and the publicity is hurting chances in other states. The “60 Minutes” show “did more harm to the use of medical marijuana than anything I’ve ever seen,” said Sen. Steve Murphy, DFL-Red Wing, and chief sponsor of the Senate-passed pot bill. “It was full of inaccuracies.”

Rep. Tom Huntley, DFL-Duluth, chief sponsor of the House pot bill, said California is the only state among 12 that have medical marijuana laws where abuse has been evident. “The world has not ended where this passed,” he said.

Veto likely
Vermont’s medical marijuana bill is three years old.Tightly written, the law so far has resulted in only 53 patients registering with the state to get doctor-ordered pot.

Vermont State Police Commander James Baker told a Burlington, Vt., television station recently that despite initial opposition from police, the law appears to be working and only legitimate patients are getting the legal pot.

Huntley said he believes the House will pass the bill next year, even though the session is expected to be dominated by issues of higher priority — transportation funding and an overhaul of the health care system.

So does Sviggum. He will keep his lip officially zipped, he said, but in an informal setting — say watching a game on TV and sharing a beer with his gubernatorialfriend — “I might mention it.”

But if the bill does pass both houses, a veto remains likely. Campion said “the commissioner of public safety would have to advise the governor that it’s a bad bill to sign.” Brian McClung, the governor’s spokesman, said Pawlenty remains opposed to the bill.

Lehman said he will continue to meet with people in law enforcement. “You gotta keep talking to everybody. That’s how lobbying works,” he said. “I’m trying to be open to positive and constructive suggestions.”

Lehman said Pawlenty might be amenable to changing his position. He and the governor talked by telephone in the early fall. The governor’s message, according to Lehman, was: If law enforcement opposes it, he’ll oppose it. If law enforcement is comfortable with it, Pawlenty will be OK with it.

It’s a touchy political issue for the governor, said Lehman, not a violation of his core values. “He understands that people are dying, that we should figure out how to help them. He’s a compassionate guy.”

Robert Whereatt, former political reporter for the Star Tribune, writes about public affairs and state government. He can be reached at rwhereatt [at] minnpost [dot] com.