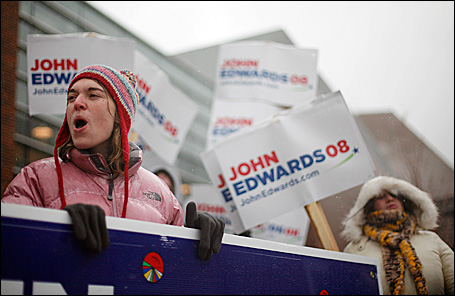 REUTERS/Keith Bedford
Minnesota has been largely ignored in 2008 presidential politics so far. Instead, candidates are focusing on Iowa. Here, backers of Democratic contender John Edwards cheer outside a candidate appearance in Des Moines.

Minnesotans are heavily involved in the presidential sweepstakes — in Iowa.

Each week, hundreds of Minnesotans are packing up and heading to Des Moines and Cedar Rapids and Sioux City to work for their favorite presidential candidates.

“It’s really amazing,” said Minnesotan Ted Mondale, a John Edwards supporter who recently was in a group of about 30 people knocking on Iowa doors. “You can’t rent a car. Motels are filled. Restaurants are filled. Every print shop in the state is busy. (The Iowa caucuses have) become an industry.”

And that industry will be rolling in more and more cash as the Jan. 3 caucus night approaches. Mondale said that even budget hotels will be charging more than $300 a night in the Des Moines area in the last nights leading to the caucus.

It should be noted that the Mondales are a family divided. While Ted works for Edwards, his father, former Vice President Walter Mondale, has endorsed Hillary Clinton.

Yes, Minnesota Republicans and DFLers will caucus on Feb. 5, which has been dubbed Super Duper Tuesday, because it’s the day when 20 states will hold primaries or caucuses. But what happens in Minnesota on that night will be neither super nor duper.

When Minnesotans caucus, candidate and media attention will be focused elsewhere for a couple of reasons. First, such heavyweight states as California, New York and Illinois will hold primaries on Feb. 5.

There will be straw polls at each of the Feb. 5 caucuses, although the DFL prefers the term “presidential preference poll” because its poll does have meaning. The party’s national convention delegation will reflect the outcome of the February preference poll. For instance, if Edwards attracts 35 percent of the votes on Feb. 5, the delegation to the Democratic convention will have 35 percent Edwards support.

Typically, however, these proportions do not get reflected in the moment of the first roll-call vote. That’s because usually, before the start of the convention, failed candidates release their bound delegates. The unbound delegates then are free to support whomever they please.

There is presidential campaign activity going on in the state. But it’s all low-budget and low-key.

Rob Hewitt, the volunteer head of Rudy Giuliani’s campaign in Minnesota, spends hours on the phone trying to create a statewide volunteer network.

“We have about a thousand volunteers making phone calls to people who have been convention delegates in the past,” said Hewitt. “We figure at least half of those people will be interested in being delegates again. We want them to hear about Rudy.”

But Hewitt is the first to admit this is not the sort of activity that’s going to make Minnesota a player in presidential sweepstakes.

“We are a very low priority,” said Hewitt. “Candidates have limited time and resources. They’re not going to put much effort into Minnesota.”

Former Gov. Arne Carlson has a pithier view of the Minnesota process.

“It’s not representative, it’s not democratic,” said Carlson from his winter home in Florida. “If the Russians had a system like this caucus system, we’d mock them.”

When he was governor, Carlson tried to turn Minnesota into a primary state. But he couldn’t get the DFL or the Republican parties to budge. “They like it this way,” he said. “It keeps the insiders in charge.”

Indeed, neither party is showing any inclination to turn Minnesota into a primary state, though both parties moved their caucuses from March to February in the hope that the earlier date would make the state relevant. But when heftier states, with primaries, made the same jump, Minnesota maintained its ho-hum status.

Brian Sullivan, a power player in the state’s Republican Party and a leader of the Mitt Romney campaign in Minnesota, likes the system as it is.

“Ideally, we would be able to alternate with Iowa as the first state,” Sullivan said, “but that’s not going to happen.”

What Sullivan likes about Minnesota’s current system is that “it’s grass-roots, there’s nothing phony about it. People who decide to be active can mix it up and have a real impact on who will be in the delegation.”

Sullivan admits that there will be no instant national recognition of what happens in Minnesota during the caucus process. But, he said, if either party gets to its national convention without a candidate already selected, Minnesota delegates will suddenly be very important players.

Of course, there hasn’t been anything close to a brokered convention since 1976, when neither Ronald Reagan nor Gerald Ford had enough delegates to win the nomination as the convention opened.

For years, many have complained about the state-by-state chaos that ensues when the parties go about the business of selecting their candidates.

Tri-partisan approach to push regional primaries
Now, Democratic Sen. Amy Klobuchar and colleagues Joseph Lieberman and Lamar Alexander intend to do something about it. The three senators have proposed legislation to create a national system of regional primaries that the National Association of Secretaries of State has advocated for a decade.

“This is a tri-partisan effort,” said Klobuchar. “We have an independent (Lieberman) and a Republican and myself working on this, and we’re getting more authors.”

Klobuchar believes that after the November election, we’ll all be disgusted by what a mess the current nominating system has become.

Under the proposal, the nation would be divided into four regions: East, South, Midwest and West. The states in each region would hold their primaries — or caucuses — on the first Tuesday of March, April, May and June. The regions would alternate positions, so the region that is first in 2012 would be last in 2016.

As a bow to tradition, Iowa and New Hampshire would be exempted from the legislation and allowed to stay first in line.

“All we’re trying to do right now is set the table for meaningful discussion after the next election,” Klobuchar said. “If the parties want to clean this up, fine. But they’ve never shown the willingness to do it and it’s clear to us something needs to be done.”

It’s impossible to predict whether there really will be an appetite to change the system following the election. What is obvious that Minnesotans who want to see Oprah or work shoulder to shoulder with Huckabee must pack up and head to Iowa.

“It’s exciting,” said Mondale of what’s happening so close but so far away.