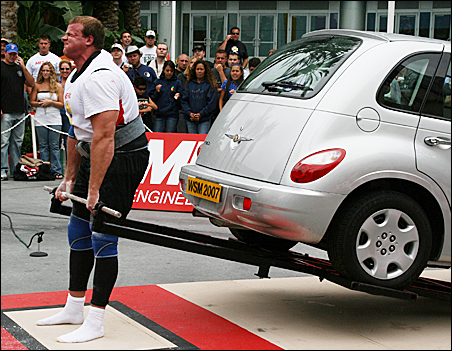 Courtesy of Dave Ostlund
Dave Ostlund, Minnesota’s Strongest Man, can lift a mini-SUV off the ground and toss 60-pound kegs over a 16-foot-high wall.

I will not make jokes about Dave Ostlund. I am smarter than that. Dave is 6 feet 7, 320 pounds and Minnesota’s Strongest Man. He proved that in California last September and, finally, the evidence will be displayed nonstop on ESPN2 on Dec. 26.

Ostlund, a former Edina High and University of St. Thomas athlete, finished sixth out of the globe’s 25 most powerful guys in this year’s World’s Strongest Man competition in Anaheim, Calif.

For that achievement, he pocketed a mere $8,000, enough to cover Barry Bonds’ legal bills for a day. But what’s money when you can lift 820 pounds — Vikings Matt Birk, Tarvaris Jackson and Adrian Peterson combined — of weights to your hips, stand straight up, lock your knees and strain your veins so they pop out like rubber bands?

With a bar attached to a mini-SUV’s rear end, Ostlund can lift it off the ground. In rapid succession, he can throw ten 60-pound kegs over a 16-foot-high-wall. Or, if you’d like, he waddles in the “duck walk barrel-carrying event” with a 500-pound weight between his legs.

I have no opinion. Dave is my friend. I’ve got Dave’s back.

Face it, the world of sports is totally kablooey. Commissioners and congressmen, sociologists and statisticians, Roger Clemens and Sean Taylor turn baseball into a legal minefield, football into religion, and sports pages into tiny episodes of “Law and Order.” You tell me which sport is “legitimate” and which is “trashy” or “made-for TV.”

“Ever heard of Milo?” Ostlund asked. “Milo and the bull?”

It’s a legend-based-on-history that goes back to 500 B.C. Milo’s dad bought him a bull calf. Milo lifted the bull. As the bull got bigger, Milo kept lifting and his strength increased.

Dave Ostlund is Edina’s Milo. He played some football for the Hornets, but preferred the throwing events in track and field, shot put and discus. He liked weight lifting.

“Then I saw this competition on ESPN,” said Ostlund, who has done some real estate appraising on the side. “I saw guys lifting rocks and pulling trucks. I got interested.”

He was always tall, but only about 230 pounds in high school. So, he lifted. He read body-building magazines. He lifted some more. He saw pages of advertisements for “supplements” in those muscle-bound, oiled-up magazines.

“It’s easy to get drawn into supplements as the key to your progress,” Ostlund said. “But, you know what? Most supplements don’t do that much.”

He acknowledges he bought supplements. Nothing illegal, but testosterone boosters that were, admittedly, “on the edge, borderline.” Needless to say, there is no steroid testing at the World’s Strongest Man competition. Ostlund wishes there were. He knows that testing doesn’t sweep clean a sport. But it makes an event healthier, less bionic, less freakish, less suspect.

“Me, right now, I take protein powder, a multivitamin and salmon oil,” he said. “If I could go back to being 16 and take what I spent on supplements, I’d buy more meat and more eggs and more vegetables. That’s what I’d do.”