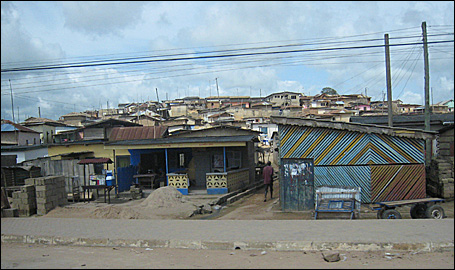 Photo by Roxane Battle
A small village in Ghana.

ACCRA, GHANA — The roads in Accra are bumpy and dark. There are few if any street lights. There is a full moon, yet we are almost completely reliant on the head lights of our SUV to cut a path through the darkness during the short ride from the Kotoka International Airport in Accra.

I have come here for a wedding ceremony. My own.

My husband is Randy Morrison, senior pastor of Speak the Word Church International. For 30 years, he has led the large non-denominational multicultural congregation in Golden Valley in addition to hosting a television broadcast that is seen around the world, including Ghana. He is recognized here. He has come to Ghana for the past 10 years to speak at an annual conference held at the International Central Gospel Church in this capital city.

Over the years, Randy says, he has seen progress in Ghana. There is a new shopping mall, the Mall of Accra, not unlike a typical Target. A number of new roads have been built and some old roads are being repaired. There is construction everywhere. And the nation’s economy has seen growth, despite a recent drought and a national energy crisis.

Ghana, however, like many developing nations, is a country of great contradictions. Poverty and wealth are often next door neighbors.

During our stay we would pass grand mansions with terra cotta roofs and neatly cut lawns landscaped with tropical flowers. And just on the other side of a thick brick wall would be a shopkeeper in a tin-roofed shed, cobbled together with painted planks of wood.

These are the local merchants who sell everything — from hair care products, to Coca-Cola, to phone cards and toilet fixtures — on the red dirt along the road in a space sometimes no taller or wider than a MTC bus shelter.

The night we arrived we passed one shop after another before coming to a stop at a red light at a busy intersection. As we waited, a man in a dirty faded orange t-shirt approached the driver’s side window. Most of his teeth and his right arm were missing. He spoke to our driver in a language I didn’t understand.

Having no success with our driver, the beggar moved to the back driver’s side window…where I sat.

“Just look straight ahead,” my husband repeated, as he took my hand. The light turned green and we sped off, leaving the beggar but not the memory behind.

At our hotel I was again struck by this country’s contradictions. In the hotel restaurant, whispers of steam escaped from chafing dishes filled with the night’s dinner. Baked fish and white rice. Steamed cabbage and cauliflower. Lamb in a smoky pepper tomato sauce and jerk chicken pieces with chunks of pineapple and green peppers. And for dessert, warm banana bread pudding with vanilla and chocolate sauce.

The bill came to 60 cedis, the official currency of the Bank of Ghana. Randy told me we had probably just eaten the equivalent of one hotel worker’s weekly salary.

I thought about that as we walked down a brick path to our cabana overlooking the Atlantic Ocean.

T.T. was not far behind, and guards armed with batons maintained a constant presence. 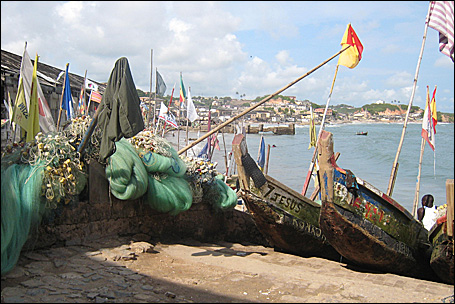 Photo by Roxane Battle
A replica of a ferry boat named Jesus.

A ship named Jesus
There are more than 22 million people in Ghana. Most of them, some 63 percent, are Christians — a religious affiliation worn well beyond their sleeves.

“Thank God” is a sign in the back window of a bus. “By His Grace” is the name of a store selling colas and candy. Among the slanted tin-roofed shops selling tires, sunglasses and fabric are shops with names that are more like religious proclamations: “In God We Trust” and “Everything by God.”

“They want you to know that they are Christians and that they are not ashamed of it, and that you can do business with them,” said Dr. Tayo Adeyemi, one of the ministers who will also speak at the church’s conference.

Adeyemi (Ad-EE-yem-ee) is a Nigerian who became a Brit. Born in London, his parents returned to Nigeria, where he was raised and attended medical school. He then returned to London to practice as a neurosurgeon until, he said, God called him and he went, at first reluctantly, into the ministry. In 14 years, his church in England has grown from 50 to 2,500 members.

“I could have made much more money if I had stayed in medicine,” he said, “but to see people come to you broken, and six months later — six months is my benchmark — see them renewed and filled with hope, that transformation is priceless.”

The quest for changed lives has taken Adeyemi to Australia, the United States, India, New Guinea and several countries in Africa multiple times. It is the bond that exists between him and my husband. In addition to speaking at each other’s churches, they meet in Africa every year.

They say that the hope for Ghana and other African nations lies in the power of the gospel to transform people’s lives.

“We don’t know, the next president of Ghana might be at the International Central Gospel Church. And if we can help them hear moral teachings, so that when they ascend to power, they will remember,” Adeyemi said.

But there is an irony: In many African nations, oppression is historically linked to religion.

During a tour of what is now a museum, I stood in a second-story room which once held the first Anglican Church in Ghana, built by Europeans. The church has a breathtaking view of the ocean and sits directly above a dungeon that was used to hold war captives who were sold by their Ghanaian captors into slavery.

The church is housed in Cape Coast Castle, built in 1555, on a beach overlooking the Atlantic. The Portuguese, Dutch, Danes, Swedes and Europeans all fought for control of the castle. It was a trading outpost, where starting in 1665, gold and human beings were bartered for in the same auction room, a practice that ended in 1883.

One of the first ships that arrived at Cape Coast to carry slaves to the New World was named Jesus. 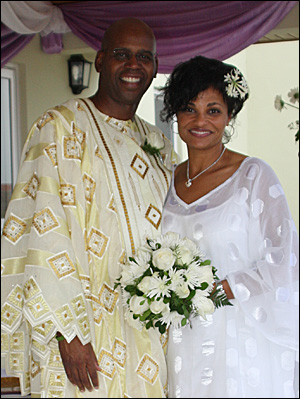 God of our fathers
Pastor Mensa Otabil is the reason Randy and I am in Ghana. He and Randy are best friends. Sometime after the two met at a speaker’s conference in the Bahamas 16 years ago, they started trading continents, taking turns speaking at each other’s church.

A native Ghanaian, Otabil (OAT-ah-bill) and his wife, Joy, are responsible for starting a network of nearly 200 churches in Ghana. The grandson of a farmer, son of a government worker, at 48, Otabil is also founder and chancellor of Central University College, the first private university in Ghana.

Doc, as Randy calls him, performed our wedding ceremony and hosted a catered wedding dinner for us at his home, situated in a gated community of manicured lawns.

Two days later he opened the church conference where about 6,000 people attended workshops and 10,000 attended the church service.

There was dancing and singing, at times deafening as the voices of 10,000 raised to the heavens with fervency and an absolute conviction that the God they worship is real.

This is a common occurrence in Africa.

“Africans are spiritual people,” Otabil said. “We believe that spirituality is something that cannot be taught, it is innate. And that’s why spirituality in Africa is so strong, and vibrant, because we recognize it as the God of our fathers, not the religion the missionaries brought, but something we already owned and are becoming to know.”

Next year, Randy, Adeyemi and Otabil are planning to go to Tanzania, Uganda, Kenya and possibly South Africa. They call themselves the Three Amigos and have sworn to spend the better part of the rest of their days attempting to save the world.

Roxane Battle, a local television journalist for more than 20 years, covers ethnic communities within the Twin Cities area and writes about a variety of other topics. She can be reached at rbattle [at] minnpost [dot] com.

Ghana: What you need to know

Ghana: Located in Western Africa, tucked right underneath the continent's horn, bordering the Gulf of New Guinea. After a long series of coups, Ghana is now one of the more politically stable countries in Africa, and this year celebrates 50 years of independence from British rule.

Capital: Accra. Here is a map of Accra.

Climate: Tropical. It hovered in the 80's while we were there and rained a few days, which the locals say is unusual, given the rainy season occurs during our summers, typically ending in September.

Language: English is the official language, although I'm told there are upwards of 50 different tribal languages spoken there as well.

Official currency: Cedi. While we were there the cedi was actually stronger than the dollar with an exchange rate of $0.91.

Roxane's carry-on: Dramamine: I suffer from motion sickness, and without it, I would have been toast, given the bumpy and congested condition of many of Ghana's roads. Airborne: These orange flavored tablets are supposed to boost your immune system. I figured it wouldn't hurt, given the fact we flew more than 14 hours each way, from Minneapolis to Amsterdam to Accra. Ambien: Accra is five hours ahead of Minneapolis. Smooth Move tea: Produced exactly that. Swear by it. Senna is the tea's active ingredient.