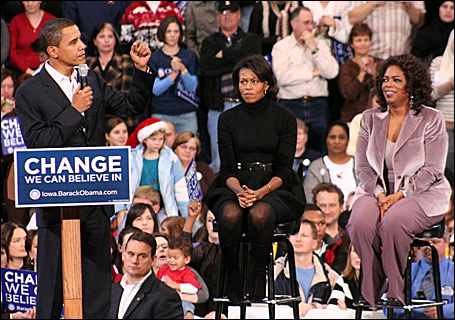 CEDAR RAPIDS, Iowa — There were moments when it was unclear who was campaigning for whom, but the crowd of nearly 10,000 gathered here on a sleet-filled Saturday night seemed equally happy to applaud Oprah Winfrey and Barack Obama.

“I am under no illusions,” Obama said. “There are some people who are here to see Oprah, and I’m sort of a byproduct of that, and I appreciate that. We know that for her to take the risk of stepping out of her comfort zone is extraordinary.”

Obama then asked the audience to applaud his star backer, shouting, “We love Oprah!”

It was a hearty, if over-the-top, thanks for Winfrey’s unequivocal endorsement. Her 20-minute speech was punctuated by the repeated declaration, “We need Barack Obama!” and closed with the statement, “I’m here to tell you, Iowa, he is the one.”

Winfrey likened the senator to a prophet by saying, “When you listen to Barack Obama, when you really hear him, you witness a very rare thing: You witness a politician who has an ear for eloquence and a tongue dipped in the unvarnished truth.”

In the much-anticipated rally, the Media Empress met the Democrats’ Rock Star, and “Live Your Best Life” wed “Audacity of Hope.” The lingering question: What happens when you put two megawatt stars together on one stage? A solar eclipse? An electrical outage?

The answer: a full-throttle love fest. “I love to hear Obama speak,” gushed Gilberta Leavell, 86, a Cedar Rapids native. “And I just love Oprah.” Pressed for her preference, she said, “It’s a tie.”

A nerve-racking political debut
Then there’s the question of Winfrey’s electoral impact, the ultimate test of her Midas touch. An Oprah endorsement has transformed obscure books into bestsellers and a balding psychologist into a household name. Is it powerful enough to help turn a junior senator into president of the United States?

Winfrey addressed these questions immediately, mocking “pundits” and their speculation about the impact of her stumping. “I really don’t know [my impact],” she said.

Winfrey’s political debut in Des Moines revealed a new, less-certain side of the talk show titan. She read from a script and appeared torn by the desire to speak from the heart and the desire to speak carefully. When she departed from her script for a phrase or a sentence, she returned with varying degrees of grace.

Though the speech focused on Obama, her friend, Winfrey made a few pointed statements about Obama, the politician, defending his experience and praising his early objection to the war. “Long before it was popular, he stood with clarity and conviction against this war in Iraq,” she said, eliciting one of the loudest cheers of the night.

The only applause that rivaled it came when Obama said George W. Bush’s name would not appear on the November ballot. While the audience cheered and clapped, Winfrey sat still, her hands folded on her lap, demonstrating the kind of diplomatic restraint experts say is necessary to preserving her wide fan base.

Soccer moms and swing voters
That fan base includes many soccer moms, a group that has represented a swing vote in the past few presidential cycles and is sitting squarely in the Senator Hillary Clinton camp, said Blois Olson, a media consultant from Hopkins who has advised dozens of political campaigns in Minnesota. Winfrey’s endorsement also reflects an attempt to win over some Clinton-supporting African-Americans, he said.

“You’re taking someone who’s very powerful and very well known and has a lot of untapped political capital, and you’re going right after the heart of your opponent’s political base,” Olson said. “That makes it significant and interesting and a case study in modern politics.”

Though Olson hasn’t heard of anyone who’s decided to vote for Obama because of Winfrey, he thinks the endorsement could create critical momentum during the final weeks before the caucus.

“We are sitting here, the last big weekend before it’s all about holiday shopping and New Year’s, and this story is leading every major newscast,” Olson said. “It’s being talked about at coffee shops and holiday parties across America. Everybody’s watching to see if Obama’s going to get an Oprah oomph.”

Winfrey’s friendship with Obama began three years ago when, inspired by his Democratic National Convention address, she interviewed him for her magazine. In October 2006, the Fairy Godmother of “favorite things” introduced him on her show as her “favorite senator.”

In May, Winfrey told Larry King she was endorsing Obama, marking the first time she had endorsed a political candidate.

“I think that what he stands for, what he has proven that he can stand for, what he has shown was worth me going out on a limb for,” she said, “and I haven’t done it in the past because I haven’t felt that anybody — I didn’t know anybody well enough to be able to say, I believe in this person.”

Little did Winfrey know, then, that that limb would be hanging in Iowa on a freezing December day, including a faulty microphone in Des Moines and an uncomfortable-looking swivel chair — a far cry from her studio couch. At one point, Winfrey cringed as the mic gave out on Obama. And she rotated the positions she sat in throughout the senator’s 30-minute Cedar Rapids speech.

Cashing in
Winfrey told King that a financial contribution to Obama’s campaign would have a minimal impact, limited by federal regulations. “I think my value to him, my support of him is probably worth more than any check,” she said on his show.

Had Obama been required to write a check for Winfrey’s stumping, it would have been a big one, Olson said. He estimated the value at about $50 million. That number makes the $3 million Obama raised at Winfrey’s September gala — the most lucrative fundraiser of his political career — look modest.

The valuable endorser was even busier Sunday, when she traveled with Obama to South Carolina and New Hampshire. The high-voltage duo drew 29,000 to the University of South Carolina’s football stadium and 11,000 to a Manchester, N.H., arena.

Ultimately, what matters is not why the crowds came to these rallies, but what they thought when they left, said Nick Kimball, of White Bear Lake, who serves as Obama’s Iowa new-media director. “It’s still up to Obama to close the deal,” he said.

The senator seemed to impress the Minnesotans who made the trek to his Cedar Rapids rally.

“I was amazed at how articulate he is,” said Rachael Vaubel, a medical student from Rochester who said she’s been too busy to follow politics.

Wendy Erickson, a Target product scientist from Minneapolis, said Obama scored points with her by saying he likes “strong women,” naming among them his mother, his wife and his famous endorser. “I’m still not positive I’ll support him,” Erickson said, “but this pushed me closer.”

Though the rallies were open to the public, some Iowans were worried about space limitations, and Obama’s staff devised a system to capitalize on those concerns.

The staff presented three methods to ensure the receipt of an admission ticket. Iowans could pledge four hours of campaigning for Obama — making phone calls or going door to door. They could attend caucus training, which takes about 45 minutes and explains the logistics of caucus day. Or they could receive a ticket from their precinct captain, making a connection the staff hopes will prove valuable come caucus time.

The policy seemed to match the spirit of the pay-it-forward talk show queen enticing Iowans. “It’s a unique strategy and a smart way to leverage Oprah’s star power,” said Nick Kimball, Obama’s new-media director for Iowa. “We want to use this as a way to build our organization, because at the end of the day, the candidate with the best organization is going to be the most successful at the caucus.”

In Des Moines, 6,000 people received a ticket from one of these three methods. In Cedar Rapids, 5,217 did — more than half the audience.