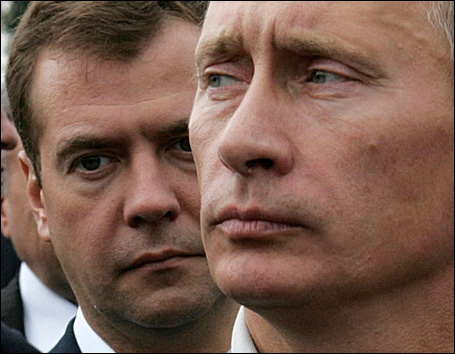 Who will be on the throne that Vladimir Putin clambers behind next year? This morning, the Russian president anointed Dmitry Medvedev, the government’s first deputy prime minister, as his successor. Russiaprofile.org labels Medvedev, unsurprisingly, “100% a Putin protégé.” At a meeting of Kremlin-aligned political parties today, Putin said of the 42-year-old Medvedev, “I’ve been very close to him for more than 17 years and fully and completely support this candidacy” for the presidency that switches over next March.

One of Putin’s St. Petersburg cronies, the then-25-year-old Medvedev first worked with Putin when the ex-KGB agent ran the city’s Committee for External Relations, which promoted the city to foreign business. When Putin took power from Boris Yeltsin in late 1999, one of the first people he hired was Medvedev, then a law professor at Leningrad State University (Putin’s alma mater). Like Putin, Medvedev has ascended; in addition to his government post, he chairs the board of the world’s largest natural gas company Gazprom. Gazprom is responsible for one-quarter of the world’s national gas exports. It is the epitome of Putin’s statist capitalism and the tip of the price-sensitive spear pressuring European Union and former Soviet states.

Another name floated
Medvedev has long been considered Putin’s likely replacement, but in recent years, Putin has tacitly floated the name of another first deputy (yes, there’s more than one), Sergei Ivanov, the 54-year-old defense minister. Although it’s hard to say how much power the presidency will retain in Putin’s shadow, Medvedev’s ascension appears to be a triumph for the business bloc as a projection of Russian power compared to the defense establishment. According to Russiaprofile.org (co-founded by the independent Moscow Times), Medvedev has a strong domestic ministerial profile — including responsibility for raising the sagging Russian birthrate! — compared to Ivanov.

Reuters puts Medvedev in the “more liberal wing in Putin’s entourage.” The news service notes, “State-run television shows him communicating with students, intellectuals and cultural figures, although Medvedev has consistently refrained from stating his political views outside the designated area of social programs.” The Bloomberg newswire reports that in an independent poll published last month, Russians gave Medvedev 24 percent support, compared with 25 percent for Ivanov and 20 percent for the 66-year-old Prime Minister Viktor Zubkov.

The poll that really matters, of course, is the one inside Putin’s head (though the four parties that form Russia’s majority bloc in Parliament signed off on the choice this morning). According to Bloomberg, international businesspeople like the news, or at least the certainty of the identity of Putin’s choice: as of mid-day in Moscow, Russian stock indexes were up 1.4 percent and Gazprom shares rose 2.9 percent.

The BBC observes that Medvedev ran Putin’s first presidential campaign in 2000; as president himself, he would have the power to appoint Russia’s regional governors, a power Putin claimed earlier this decade. In 2005, Peter Lavelle, who ran a blog about Russian politics, surveyed Medvedev’s rise, calling him “an experienced administrator and organization man” who “knows the bureaucracy inside out and backwards; he knows the regional governors, high ministry officials, and, importantly, was instrumental in recasting state-oligarchic relations — a plus that probably saved Russia from collapse.” The International Herald Tribune notes that unlike Putin and many Kremlin favorites, Medvedev has no KGB background, and Russiaprofile.org says he did not align himself with the Yeltsin-era oligarchs that he briefly worked for at the start of Putin’s presidency.

In short, Medvedev is a Putin man, beholden to no other state organ, which may be exactly what the current Russian president wants.