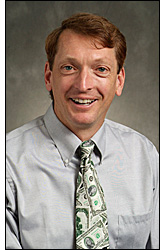 As program director of financial counseling at Lutheran Social Service in Minneapolis, Darryl Dahlheimer has seen the workload of the center double since 2006. This year, the nonprofit organization has counseled more than 1,500 people, a rise attributed to increasing home foreclosures.

Today, the Federal Reserve, which has been criticized for not reacting quickly enough to the mortgage crisis, announced a plan to protect home buyers from shady lending practices.

The latest figures show Minnesota was sitting on 4,004 foreclosures in the third quarter of 2007, a 152 percent increase from the same quarter in 2006, reports RealtyTrac.

That trend isn’t expected to improve any time soon. According to the Subprime Lending Crisis report (PDF) by the Joint Economic Committee of Congress, Minnesota will rack up another 27,871 foreclosures by the end of 2009. Why? For one thing, more than 57,000 Minnesotans currently are in homes with mortgage rates that will increase over the next two years. Other factors are declining home prices and the impact of foreclosures on neighborhoods.

Whether Dahlheimer’s clients are dealing with the deed scams that have sprung up in the Twin Cities, or predatory lending practices or maxed-out credit cards, he assures every client that anyone can rebuild. “It’s the best part of our economy,” he says.

Even so, Dahlheimer concedes that the downside of our economy has resulted in a decade of copious and nefarious lending practices, leaving some consumers up against a wall. Dahlheimer recently answered MinnPost’s questions on what he has seen locally, where we’re headed next, and how the new lending and rate-freeze laws will affect Minnesotans and the local housing market. This interview, conducted last week, has been edited for length and conciseness.

MinnPost: There was a study recently posted by a Wall Street Journal blogger that said curtailment of income accounted for 58 percent of foreclosures, and a little less than 2 percent were actually caused by mortgage-payment adjustments. Is anything like this bearing out locally? What are you seeing as the primary cause for foreclosures?

DD: That statistic does not represent the on-the-ground reality we see in our foreclosure-prevention counseling at Lutheran Social Service Financial Counseling. While the ARM readjustment itself might not be the trigger to foreclosures, people have these ARMs in the context of shaky and precarious finances in the first place, which is why they weren’t able to get a traditional mortgage.

So, what you’re seeing is that an ARM traditionally sets you up to be right at the threshold of what you can pay. It’s going to set you so close, with no cushion, that one life event will mean you can’t pay. It cynically gets coded as the life event that pushes you over, when it’s actually being up to your eyeballs in water, and then it’s the life event.

All of us have life events. And part of responsible lending is to leave a cushion in there, because life does happen.

MP: Along with the high rates of foreclosures, what are you seeing locally in terms of debt crisis that you haven’t seen in previous years?

DD: The good context is that our American system works so that people can become homeowners and have that asset. That said, the financial services industry is a very robust, creative industry, which means there is lots more opportunity for people with damaged credit or less ability to repay to afford a house. In other words, the dream of homeownership has been extended beyond what it was. And that’s a good thing.

But the downside of that is that the unregulated creative market creates short-term profits at the expense of people keeping their houses. So for that reason, we are seeing things that we never saw before.

For example, a study by the Greater Minnesota Housing Fund looked at seven outstate counties that have a lot of foreclosure problems right now. And for the people who had sheriffs’ sales, the time between buying the house and the sheriff’s sale where they lost the house was averaging 24 months. So, start to finish of the American dream was two years. That’s about irresponsible lending, by the consumer accepting terms that set up something like that, and by the lender going for short-term broker fees and a hot-market profit.

MP: Have consumers seen the worst of the housing crisis in Minnesota already? What can we expect to see in the next year?

DD: There’s certainly a flood of houses nationwide and in our Minnesota market, because of the foreclosures and the reluctance of people to accept a reduction. No one wants to sell stocks when they’re down; no one wants to sell houses when you don’t make a profit. What it means is that it’s going to be harder to sell. The larger public, not just those who go through foreclosures, is also punished by the fiscal irresponsibility that has happened.

I have heard estimates that foreclosures will actually continue to increase for 2008 and 2009 due to ARM resets and other factors. So we have not seen the worst yet is the best prediction I hear.

MP: Can you explain President Bush’s plan to freeze some adjustable-rate mortgages? Because of the many rules, like a borrower can’t already be late on payments, critics say it only will help about a third of the 2 million homeowners who will see a rate increase. More than 57,000 Minnesotans will see their rates increase in the next two years. Can you talk about whom this will help locally and how?

DD: The impression I get on the ground is that Bush’s plan will help a very small percentage of people. It’s not a system-wide response. But, hey, it’s “an” answer to some of the people’s distress. I think a larger answer is the kind of anti-predatory lending laws we have in Minnesota that have become a real model for legislation. It doesn’t help the current problems, but it prevents the nonsense from recurring.

MP: Minnesota’s current laws have scrutinized lenders and brokers, which is a good thing. But they’ve also tightened lending standards. For example, stated income, where an individual states their income without documentation, is now forbidden. How will prospective buyers be affected by these new laws?

DD: Any consumer protection clause by the government or law acts to slow down the marketplace and restrict free trade. And the downside of that is there’s less access by people with damaged credit or no credit. But the positive side of it is it takes away the worst excesses, where there’s [lender] “wealth stripping” from someone who pays a lot to get into the house (a buyer who forks over a down payment for a home they can’t afford) only to lose it two years later.

MP: What are you seeing homeowners do to cope with mounting debt in the wake of the subprime fallout? Are they forgoing paying credit cards or retirement planning? Is it having a secondary impact we aren’t seeing yet?

DD: I am not sure we know what people are doing in terms of coping with this. The traditional American answer is to replace one type of debt with another type of debt. For example, when people rack up credit cards, rather than have a debt-repayment plan that pays them down, they would just shuffle that debt onto their home mortgage or with a home equity line of credit. Or they would transfer it from card to card to card.

Now with the gutting of home equity and the tightening of consumer credit they won’t be able to use that strategy.

We believe in the Debt Management Plan, the DMP, which is a tool that consumer credit counseling services have, like LSS, to cut up the cards, get a lower interest rate and a stopping of all late fees, and an option to pay back the debt in full with good credit outcomes within five years or less.

MP: What do you think the current mortgage crisis speaks to? We now know that mortgage lenders were greedy, people got hurt, the market is going through a time of painful correction. What else have we learned about our economy?

DD: I think it really speaks to not good guys or bad guys, but a real need for universal financial education. In this country, we are allowed to take out profoundly damaging contracts — for credit, for loans, for houses, cars, etc. And we can really easily put ourselves in the hole without due diligence.

The access to credit without any education is really a recipe for continuing disaster. I am so proud of Wisconsin for having enacted a law that there’s universal high-school financial education. In order to graduate, students must have a semester of financial counseling. That’s something we should see as just as important as driver’s ed and sex ed in terms of preventing predictable problems.

Molly Priesmeyer writes about real estate, veterans affairs and visual arts for MinnPost. She can be reached at mpriesmeyer [at] minnpost [dot] com.

Today's press release from the Federal Reserve Board.

Here is today's report from The Associated Press via NPR about what the Federal Reserve plans to do to protect home buyers from shady lending practices.

Meanwhile, The New York Times reports today that the Fed "shrugged as the subprime crisis spread."

The Subprime Lending Crisis report [PDF] by the Joint Economic Committee of Congress.