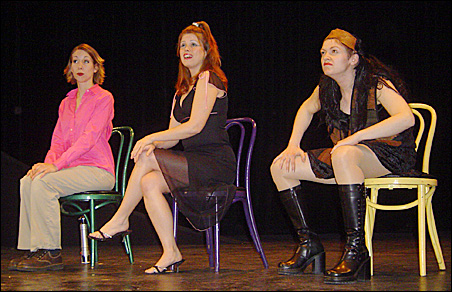 Courtesy of Theatre Unbound
From left: Kristin Richardson, Kristen Shea and Stacey Poirier in “Episode 3 1/2: The Empire Strikes Out,” one of the short plays from the 2005 project.

Actors usually spend weeks crafting their characters, learning their lines and rehearsing their roles. So what happens when they don’t know what roles they’ll be assigned until the last minute and their final act comes a few hours later?

Angela Marsh faced down that kind of stage fright last year at Theatre Unbound‘s “24 Hour Play Project,” where a half-dozen brand-new short plays are written, rehearsed and presented in a single day.

“I got the call early in the morning saying that I didn’t have to come in until the afternoon, but that I should brush up my Eastern European and Russian accents,” Marsh said. “The problem was I didn’t have any.”

Marsh scrambled that morning and found an accent tape she had made years before. “It was partially destroyed, but it helped. By the time I went off to rehearsal I had my Eastern European accent. I never thought I could have pulled it off, but I did.”

This kind of white-hot creation comes with the territory. It’s what brings more than 40 playwrights, directors and actors back year after year for the annual Theatre Unbound fund-raiser, which starts this Friday evening and culminates Saturday with a performance at the Neighborhood House in St. Paul. The event is important for the company, which is dedicated to providing opportunities for women in theater. Not only does it help to raise a portion of the company’s $35,000 budget, but it also generates buzz for the theater.

And, according to participants, it’s fun.

“The ’24 Hour Play Project’ is a tremendously helpful exercise for everyone because it proves that it’s possible to do anything,” said Matthew Everett, who has participated nearly every year and has been the playwright coordinator since its inception in 2001.

A stage for works by women
Since its founding in 1999, Theatre Unbound has presented works by women — such as last fall’s “Frankenstein Incarnate: The Passions of Mary Shelley” — or fresh takes on classic works, including an all-female version of Shakespeare’s “The Tempest.”

“We didn’t feel there were enough women’s stories being told. There weren’t enough good roles for actresses to play and not enough scripts by women being produced,” said Stacey Poirier, one of the founders of the company and artistic director. “When people come, they realize it’s not just about women’s issues, but also good theater.”

Inspired by a similar one-off project described in American Theatre magazine, Theatre Unbound decided to bring it to the Twin Cities. “We threw one together really fast and produced it in a matter of a weekend,” Poirier said. “We discovered something new and unique and have kept doing it since.”

The first event had three elements that needed to be in each show — chocolate doughnuts, the emotion bliss and the line, “Do you suppose it is going to rain?”

“Other than that, we were free to write what we liked,” Everett said.

Not as easy as Sunday morning
For the 2008 event, four different elements have been chosen. In a twist, voters at the Theatre Unbound website could vote for the exact one chosen in each category (an object, emotion, line of dialogue and “something random,” such as a stage direction or the song “Easy Like Sunday Morning” by Lionel Richie. Final selections will be revealed to the playwright teams Friday evening, Feb. 1.

Then the playwright teams will spend the evening and overnight hammering out a script. By the middle of the night, tempers can fray and self-doubt might enter the equation.

“The biggest worry any writer tends to have is, ‘Will this be as hilarious — or poignant — to an audience tomorrow as we’re finding it at 3 in the morning, when we’re all punchy and sleep deprived?’ and ‘Will the poor actors and director have any idea of what to do with this script?’ ” Everett said.

On Saturday, the actors will be called in for a single rehearsal, either in the morning or the afternoon. Poirier chooses the actors from those who have performed with the company or have auditioned in the past. “That way I have some idea of what kind of role they could play,” she said.

“You are just barely on the edge to keep it all together,” Marsh said. “When you get called, you don’t have any idea of how many lines or anything. You ask yourself: ‘Do I have time to eat? That’s 20 minutes less I have to work.’ “

Exhaustion plays a role, according to Ahna Brandvik, who has acted, directed and hosted the event. “There is always a point in the process when you hit your wall but you go on, push through it and try to laugh. Actually, laughter saves a lot of potentially tense times.”

Diverse results, forgiving audience
The resulting 10-minute shows “get the same four or five things, but they are all so different,” Poirier said. “You could have one that is powerful and poignant, while another is very funny.”

“Everyone jumps in with both feet. Everyone seems to make broader, braver choices. Sometimes it’s brilliant. Sometimes — not so much. Luckily, the audience is in for the ride and they are forgiving,” Brandvik said.

Everett says that even though there’s no time to second-guess, “it’s a real kick working on something like this because you have to just shove your internal censor or critic to the side and dive right in.”

Marsh looks forward to getting the call again this coming Saturday. “This has given me a lot of confidence in my performing,” she said. “I have spent too much time internally focused. This gets me thinking about what theater is really about, which is communicating.”

Ed Huyck is a Minneapolis-based arts and entertainment writer. Read his blog at noiseannoysminn.blogspot.com.