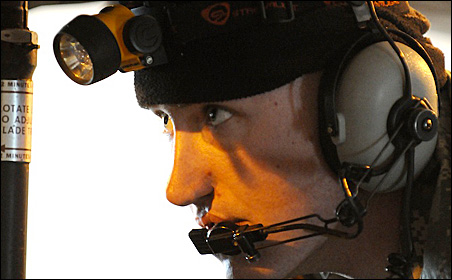 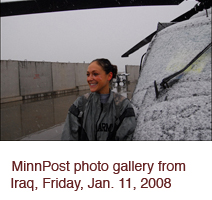 LSA ANACONDA/BALAD, IRAQ — A cloudy, cool, almost windless day at the major American base north of Baghdad, flight operations going in the background: Blackhawk and Chinook helicopters coming and going, transport planes, jets of various kinds, and in the middle of the sand and the pounding noise and exhaust fumes and occasional indirect fire — mortar attacks — from local insurgents, Delta Company of the 2-147 Assault Helicopter Battalion keeps plugging through the daily routine, which means, basically, keeping a bunch of Blackhawk helicopters in the air.

Much of the 2-147 comprises Minnesota National Guard units, with additional units from Washington and Hawaii. The 2-147 has been here since August, and will probably stay for another half-year before returning home. Some of the deployed soldiers look forward to returning to their regular jobs — one, for example, says simply, “I’m a milkman” — while others are professional soldiers, working full time with the Guard.

Delta Company 1st Sgt. Juan Esquivel, 47, of Oakdale Minn., who works full time with the Army Aviation Support Facility at Holman Field in St. Paul, said that the Iraqi deployment is tough. “But it’s especially tough for some of the younger people. We had some ‘Dear John’ letters after we got here that really had some guys feeling sad. It’s hard to keep dating when somebody suddenly goes away for a year.”

Esquivel said that he and his wife, Julie, are more or less veterans at deployments. He has been deployed twice in the states, and now this time in Iraq, so “we have it more under control.” Nevertheless, he misses his kids, Joshua, Maria and Samuel, and sits at a desk with their photo pinned to the plywood wall behind his desk. 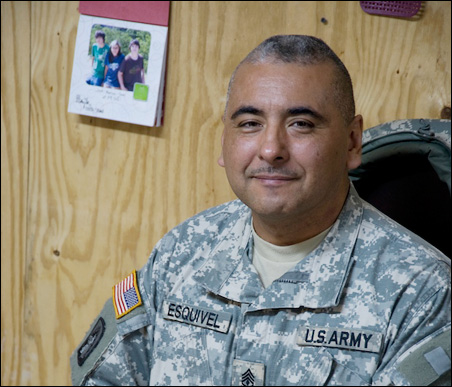 MinnPost photo by John Camp
First Sgt. Juan Esquivel of Oakdale: Iraqi deployment is “especially tough for some of the younger people.”

‘It’s really a job’
As the top enlisted man in Delta, Esquivel supervises 98 soldiers whose job it is to keep the battalion’s Blackhawk helicopters in the air: everything from drive-train repair to avionics maintenance. Which sounds complicated, and is — though it’s also somewhat analogous to what the local Lexus dealer does. They do lots of brake jobs because the Blackhawks often do “roll-on” landings, where they taxi after landing, instead of coming straight down, and the big, brutal gun-metal black machines can really chew on the brake pads. Tires get torn up by rough-country landings, and in Iraq’s summer heat, which can get well into the triple digits, the electronics have a hard time.

Esquivel says that though deployments can be hard on the soldiers, it can be even harder on the families left behind. “People think it’s awful here, because maybe you get shot at, or there’s mortars, but for us, it’s really a job: We dress really good and we eat really good and a lot of the younger guys, it’s like going deer hunting with your friends. But the people at home, you know — they’re sort of left alone.”

A sentiment not exactly shared by all the unit’s soldiers. 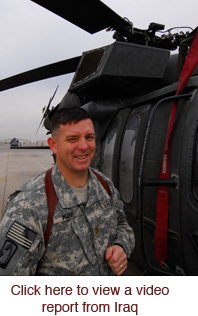 Specialist Michael Nelson of Taylors Falls works for Carlson Dairy and delivers milk for cafeterias in the Anoka-Hennepin school district. “I really miss my job,” said the skinny 24-year-old redhead. Nelson is single, and grew up in North Branch, going to North Branch High School. “I miss my cafeteria ladies. I really liked seeing them, and working with them, and some of them still send me care packages over here.”

Nelson has been in the Guard for seven years including, now, seven months in Iraq. His original Guard contract ran out on March 29 of last year, but he was involuntarily extended in the military’s “stop-loss” program, which was instituted to stop the loss of critical personnel. Nelson is a power-train mechanic, doing the heavy lifting on the big choppers. “Helicopters are basically an expensive pile of nuts and bolts, and you’ve got to keep pieces from falling off,” he said. 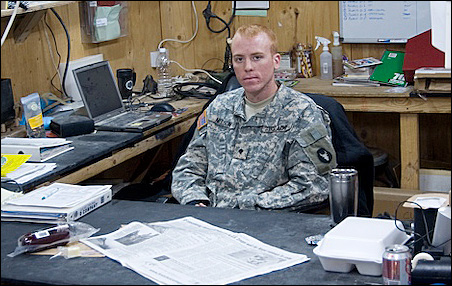 As he talked, Nelson was sitting in a tiny plywood office behind a plywood desk, which featured the remnants of a Wisconsin summer sausage, which he called “the breakfast of champions.”

“The work isn’t bad here, the people are fine, but I miss home — I love winter, I like to fish — ice fish — I like to hunt up around Sandstone, deer and grouse. I love fall and winter, and you know, you think about what you’re missing.”

In the end, he said, “I just can’t wait to get back to my lunch ladies.” 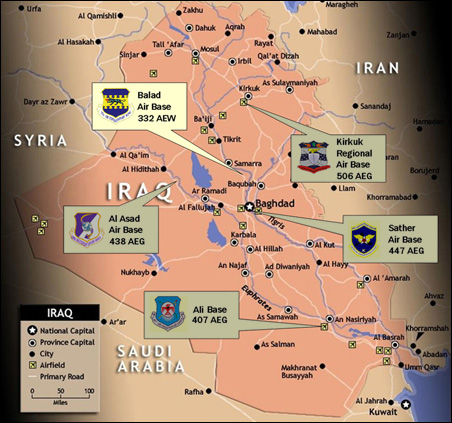 Missing winter
Winter was a recurring theme with the troops, Minnesota or not. Specialist Comfort Stelzer, 22, of Ellsworth, Wis., Pfc. Scott Swart, 19, of Henderson, and Danielle Petree, 21, of Winlock, Wash., got entangled in a discussion of snowboarding vs. skiing when they were asked about whether they missed winter: They did. A lot.

But Swart, an engine mechanic, said the deployment was not a huge sacrifice for him: “I knew when I signed up that we were going to be deployed. I signed up anyway.”

Petree ruefully confessed that she hadn’t believed it: When she signed up, “People told me that I could be deployed, but I didn’t believe it — I just didn’t.”

The hardest part for a lot of young soldiers, Petree said, was keeping relationships going with people back in the states. “It’s hard to communicate. We’ve got the phone and the Internet, but it’s not the same. So, you see a lot of breakups.” 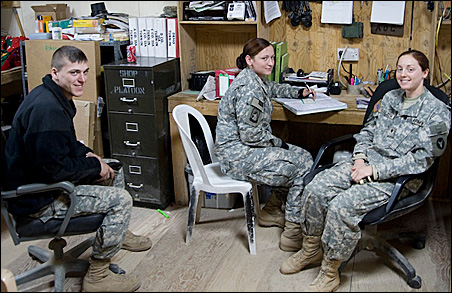 There are others, she said, who secretly like it in Iraq. “They say they don’t, but you know that they do.”

Back to winter: “I’d like to be snowboarding at Trollhaugen,” Stelzer said. “I’m missing it.”

Sgt. 1st Class Diana Fleischman of Cottage Grove has been more-or-less military for 26 years, working at Holman Field, sometimes as a government civilian, but sometimes pushed onto active duty. She believes in what’s she’s doing — but desperately misses her two children, Audry Rose, 8, and A.J., 13.

“If you’re a single mother, like I am, it gets really complicated with the family. My sister takes care of my house and kids, and we had to set up everything so she had access to all my accounts, to keep things going. One thing is, you’re really got to trust the people back at home. They’re taking care of your life, while you’re over here.” She tries as best she can to stay in touch with telephone calls and email, “but I haven’t been able to get the web-cam thing going yet. I’m trying to do that.”

As one of the top-ranking enlisted people in Delta, she runs Delta’s production control, along with Specialist Dan Malenke of Elk River, who has been in the guard for four years. “I joined after 9/11, so I figured I’d be deployed at some point,” Malenke said. His life, though, is as complicated as Fleischman’s: Malenke’s wife, Samantha, is an airman 1st class with the Air Force, and this spring will be deployed to Qatar. She won’t be back from that deployment until after Malenke gets home from this one. 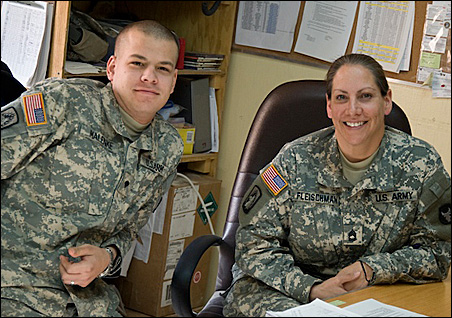 Fleischman: “I really do miss winter. I miss the holidays with my kids. I got a film of my Christmas; I’m going to put it on a CD so they could see what I was doing. …”

Malenke: “I just got back from leave, so at least I had a snowball fight this year.”

Petree, the Washington snow-boarder, said that whatever you thought about the Guard, about the deployment, about Iraq, most members of the unit seemed to agree that the time here would be something that people would look back on later in life and say, “I did that. You meet people and hang out with people you never thought you’d meet or hang out with, and, you know: You can say, ‘I went to Iraq.’ “