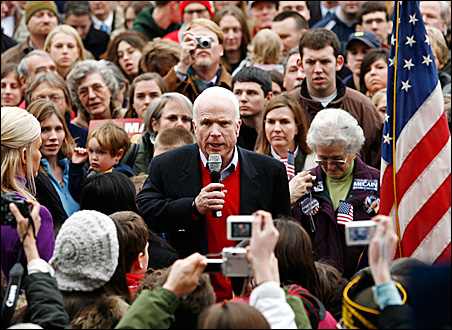 REUTERS/Shannon Stapleton
Leading in the polls coming out of New Hampshire, Republican presidential candidate John McCain speaks to supporters at a rally in Concord.

While voters in most other states have been wishing they had an earlier say in the presidential race, maybe New Hampshire’s voters should be thinking the same thing. The polls will be open until 8 tonight, but by that time Monday night many pundits were already looking ahead to the primary’s consequences — having pretty much assumed the outcome. Howard Fineman’s column for MSNBC, for example, was titled “What the heck happened to Hillary?” In it he said, not of the New Hampshire primary but of Sen. Hillary Rodham Clinton’s overall presidential quest, “Maybe she can pull it out, but I tend to doubt it at this point.”

Interestingly for Minnesotans, he followed with a Mondale comparison: “The saving, cautionary analogy is the near-death campaign of Walter Mondale, who survived Gary Hart’s charge in 1984. But politics doesn’t work the same way it did in those days. The unions who saved Mondale have far less clout; the internet has and will give [Sen. Barack] Obama far more resources than Hillary; and Hart … wasn’t exactly a user-friendly campaigner. He certainly was no Obama.”

The early assumptions and predictions, particularly for the Democratic race, were based not only on caucus results in Iowa, but also on polls such as one conducted Saturday through Sunday night by CNN. It reported on Monday that Obama “led the New York senator and former first lady 39 percent to 30 percent … . On the Republican side, Sen. John McCain leads former Massachusetts Gov. Mitt Romney by a narrower margin — 31 percent to 26 percent, the survey found.”

The makeup of McCain’s New Hampshire supporters in 2000 and the appeal Obama has to many outside Democratic ranks have led many observers to note the clout of New Hampshire’s independents, who constitute 40 percent of the state’s electorate. While Democrats and Republicans can only vote their own ballots, independents can choose either ballot. That’s a lot of swing votes, and this year they’re expected to swing a different way.

New Hampshire’s turning blue
David Broder, writing in the Washington Post, pointed out that in 2000, “McCain defeated [George] Bush in New Hampshire by 18 percentage points, thanks to his big lead among independents who asked for Republican ballots.” He added, “This year, all the surveys leading into the primary indicate that most of the independents will ask for Democratic ballots — and, as in Iowa, give their support to Obama.”

The Christian Science Monitor pointed to factors beyond Obama’s appeal that support those surveys. New Hampshire, it reports, is turning blue. “In the last election, Democrats took both seats in Congress for the first time in nearly a century and both houses of the legislature for the first time since 1874. Democratic Gov. John Lynch won a second term with a record 74 percent of the vote, and lawmakers recently authorized same-sex civil unions and a smoking ban in bars and restaurants.” The shift, said the Monitor, “is mainly a product of demographics. New Hampshire is the fastest-growing state in New England, growing more than 6 percent since 2000 as the Massachusetts suburbs sprawl northward, baby boomers retire to their second homes, and vibrant high-tech and healthcare industries draw affluent city dwellers from across the country….”

A quirky protest Monday undoubtedly gave heart to those Granite Staters who mourn the change, though it didn’t sway an enthusiastic Clinton audience. “Iron my shirt!” yelled a protester over and over. Clinton commented, “As I think has just been abundantly demonstrated, I am also running to break through the highest and hardest glass ceiling,” The New York Times reported.

The audience stood and cheered. “That’s one of the things I love about it,” she said. “It’s never predictable.”

So true — and who would have predicted that the usually reserved Clinton would turn misty-eyed after being asked at a café appearance how she keeps going on the campaign trail? Yet predictions are the stuff of presidential campaigns — and an awful lot of predictions have it that Hillary Clinton and Mitt Romney will be disappointed tonight.