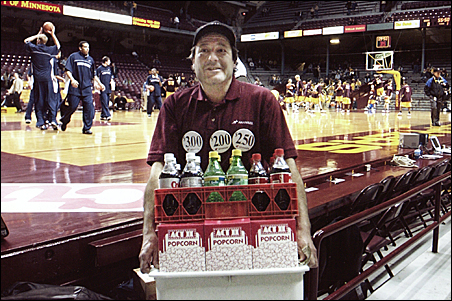 “OK, I sold my soul,” Loscalzo said the other day over eggs and potatoes at Louisiana Café on St. Paul’s Selby Avenue, the hangout for lobbyists. His cell phone rang. He nodded to other “government relations” consultants — that is, mostly, former legislators — who whisked by.

Loscalzo’s offering for the 2008 Legislature: a $25 million renovation of St. Paul’s Midway Stadium, the rickety home of the minor league St. Paul Saints and a slew of youth, high school and small-college sports teams.

Saints deal has public purpose, he says
“In my mind, this is the type of arrangement that folks should get out of stadium deals,” Loscalzo said. “There should be a public purpose behind it. And the private sector brings something to the table. The Saints are doing that.”

In this case, the Mike Veeck-owned team is proposing paying for about 40 percent of the fix-up by dedicating income streams from stadium naming rights, 15 new suites and some parking revenues. (Have you ever heard the Twins or Vikings promise that?)

Thirty years ago, when he was known only as Julian Empson, he was a leader of the huggable “Save the Met” movement that fought against the Metrodome. “Save the Met” was to Sid Hartman what the SDS was to Nixon; “Save The Met” spoke truth to power.

Power won, of course, and the puffed stadium was a windmill for a tilting Empson. But, in the end, “Save the Met” heightened the consciousness of the Twin Cities taxpayers and fans about the need to closely watch teams and government agencies when they seek public cash for new facilities.

Since the Dome’s birth, Julian added Loscalzo to his name — taking the name of his birth father — and became the most passionate advocate for community ownership of the Twins, winning a clause in the current Twins ballpark law that requires a sale to a community-based board if the Pohlad family wants to sell and can’t find a local owner.

Loscalzo opposes bad deals, not all deals
Loscalzo has never really been opposed to public investment in new baseball stadiums. He’s been opposed to bad deals for the public and, especially, for fans. After all, Loscalzo, 56, is one of the state’s great baseball fans, a Twins season ticket holder and a former ballpark vendor. Ticket pricing and ballpark design have been his highest priorities.

Even visionaries need to feed themselves, pay their mortgage and buy stinky cigars. Loscalzo has long been a lobbyist for worthy clients, mostly in the areas of transit, neighborhood economic development and affordable housing.

So, it was just a matter of time before his love for baseball and his government relations skills were married.

When the city of St. Paul began to put together its proposal for a renovated Midway Stadium, city officials recommended that the Saints get their own lobbyist to help the process along.

“We took a page out of Nixon’s book,” said Tom Whaley, the Saints’ executive vice president. If Nixon could go to China, then Loscalzo could lobby for a stadium deal.

The Saints deal is as close to a rational sports facilities arrangement as you can get. First of all, it’s a city-owned facility — with oodles of high school and American Legion ball games there every summer — that badly needs renovation. Walk through Midway. The electrical system looks as if it were installed by Thomas Edison himself. The Saints shower facilities are so grimy you can get a rash just looking at them.

At $25 million — with Saints paying for $10 million – the cost is somewhat digestible, about what the Twins will pay Michael Cuddyer over the next three years.

(There is one problem. In the anarchy that surrounds Minnesota sports facility construction, the University of Minnesota’s baseball team should play at Midway, too. There’s no reason to have a new on-campus field — under consideration — and a fixed Midway, a short bus ride from the U. But that discussion is for another day.)

I put the guru of public ownership of sports teams on the spot. If the state gives Midway Stadium some dough and the Saints benefit, shouldn’t the Saints be required to sell shares of the team to the public?

Loscalzo dropped his fork. He gulped on his eggs.

“Please,” he pleaded. “It’s the first time I’ve ever been hired to make some money on a stadium, and you want me to stab my employer in the back?”

Well, sure, go ahead.

“No, that’s a decision other folks have to make,” Loscalzo said, of a publicly owned Saints. “Because I’ve sold out.”

Nah, not true, he’s still the same old Julian. Here’s how we know. Besides readying for the pols at the Capitol, he’s been organizing his 25th annual Hot Stove League Banquet (PDF). It’s at 6 p.m. Saturday at the Ukrainian Event Center in Minneapolis.

Loscalzo will be the one wearing the Phillies shirt.