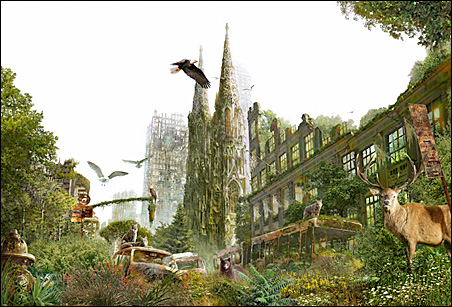 For St. Louis Park native Alan Weisman, it’s been an exhilarating and exhausting four years reporting and writing the best-selling book “A World Without Us” ($24.95, St. Martin’s Press), the premise of which is what happens tomorrow if all the people suddenly are gone. It’s an environmental handbook and fast-paced nonfiction thriller wrapped into one.

With a million copies in print in 27 different languages, Weisman’s meticulously-researched book has struck a responsive chord in a public increasingly interested in all issues green. (It has been on The New York Times best-seller list for 15 weeks.)

Weisman makes the reader an eyewitness to the post-human era with his vivid descriptions of wildlife returning to the most unlikely places such as the Korean demilitarized zone and Chernobyl, and his explanation of how the New York subways would deteriorate along with the rest of the urban landscape.

Weisman is an old friend of mine from our teenage days in Minneapolis. When I heard about his book and saw him on television, I had to find out more about his adventures. I caught up with him by phone from his home in western Massachusetts as he was preparing to leave for a publicity trip to China.

And, yes, there is a documentary movie deal with a French producer underway. Weisman said he will serve as a consultant.

MinnPost: How did you get an idea for the book?

Alan Weisman: For years I’ve been searching for a way to write a book about the global environment that would put everything together so people would understand how all this stuff connects. Environmental books, particularly when you are talking about the state of the whole planet, are so overwhelming, and oftentimes so depressing, that they frighten readers away except diehard environmental junkies.

About four years ago an editor at Discover Magazine proposed to me that I do a story for them about what the world would be like without people. “I want to know what would happen if we all just disappeared. How would the rest of nature get along?” she said.

If you wipe human beings theoretically off the planet, you get a better idea of what else is here besides us, because you remove all of our distracting influence. We can see how nature can heal from this point forward despite what we’ve already done to it if we stopped doing it immediately. We’d also see how nature would contend with all the stuff we left behind, stuff ranging from the chemicals we’ve created, the materials and the plastics, all the carbon dioxide we’ve already pumped up our chimneys.

MP: How do you determine the level of detail so that it’s enough to tell your story and make it interesting yet not be overwhelming?

AW: I have learned over the years to translate technical material to a lay audience without dumbing it down. You have to give enough detail so it has the ring of credibility and authenticity, this is based on some real science, but you don’t want to bog readers down with the level of detail that is numbing.

Then you try to find the connections to other human beings. Ecology is really my topic and it teaches us that everything is connected. I’ve learned as a journalist that people are fascinated to know not just what is but how it got to be that way, how things go step by step.

MP: You’ve been on everything from “The Daily Show with Jon Stewart” to the “Today Show” and have been written about favorably in the print media. Were you surprised by the positive reaction to the book?

AW: The first person to read the manuscript was my wife and when she started laughing in the midst of being really sobered, I realized I had hit the right mix. Describing the world the way it is, which is dark and serious and also beautiful and humorous and all those things.

Once my editor had the whole manuscript, he made some copies of it and he passed it out to a couple of key people at St. Martin’s Press and told them I think we have something special here. They read it and they got excited and that started a buzz going in the house, which is what you need to have happen.

MP: What reactions do you get from readers at book readings or talks?

AW: The book is being perceived as being both very sobering yet strangely comforting. There was a wonderful phrase in the Toronto Globe, the “DNA of hope.”

I’ve been on a lot of conservative right-wing talk shows and the book has received a very sympathetic reception from even those hosts. For one, I don’t preach in this book. I just tell facts.

Second, there’s sort of this subtext to the book: what really holds civilization together as we know it are all these workers and maintenance people. We could get rid of all the politicians and everything would keep functioning.

Third, and most important, I present one last fact: Every four days our population increases by about a million, and that’s clearly not sustainable. Everybody remembers the world when it was nicer than it is today.

MP: What about criticism?

AW: There’ve been a couple of people that were very put off by the population thing. I was attacked by a reviewer in The Washington Post. This guy just went ballistic and said this idea of overpopulation is a terrible idea. Everybody knows the problem is not overpopulation, it’s over consumption, he said. But if you ever go look at the Everglades and realize there are 7 million people living right around it, this is denial. Rush Limbaugh called me a people-hater. He admitted he had never read the book. But other than that I’ve been surprised that there just hasn’t been that much criticism.

MP: You are a kid from St. Louis Park who ends up becoming this environmental journalist guru. Were you always interested in science?

AW: I grew up in St. Louis Park and behind my house were several hundred acres of what today is referred to as wetland. I lived in that swamp as a kid. And I was just so in love with nature. I always assumed I was going to be a scientist.

Every Saturday when I was a kid, I would take the bus to downtown Minneapolis, to the old Minneapolis Public Library, which was in a beautiful old sandstone building on 10th and Hennepin and the fourth floor was a science museum. In that museum there used to be an exhibit with a stuffed passenger pigeon. It explained how the passenger pigeon used to be the most abundant bird on Earth, it had the biggest population of anything on Earth, and how humans killed them all off and by 1914 they were all gone. The message that I came away with as a little kid was, wow, we learned our lesson that we can’t kill everything off.

MP: All of these well-known people came from St. Louis Park in the 1960s and 70s: Al Franken, the Coen brothers, Thomas Friedman, classical guitarist Sharon Isbin, and you. Why?

AW: It’s really hard to say. The joke was what was in the water, but it turns out we were drinking contaminated water (caused by an old creosote plant). I had a couple of good English teachers (at St. Louis Park High School) and I had an amazing humanities teacher who basically introduced us to some of the greatest writing of all times.

MP: Could you have ever dreamed of the impact the book is having?

AW: I’ve heard from many people, including the owner of the publishing house, that the plastics chapter has just changed their personal use and with luck their corporate use of plastic. On the other hand, I hope that it’s going to cause further chain reactions out there because there is an awful lot that we human beings are going to have to do in order to restore some balance on this planet if we want to still be a part of it.

I came out of this book much more peaceful than when I went into it. I’m not worried any more about the fate of the planet. The planet has gone through incredible disasters before and it always comes back. Life always wins. The earth is going to survive us. I really want us to survive, which means keeping around a lot of the ecosystems that still remain, and giving them room to live and to flourish. That’s an enormous challenge that’s going to occupy not just the rest of your time and my time on Earth, but your kids’ time. And if I have been able to give people a perspective on this thing and make them think about it, I feel I’ve done my job.

Best-selling author Alan Weisman talks about a world without people — and growing up in St. Louis Park