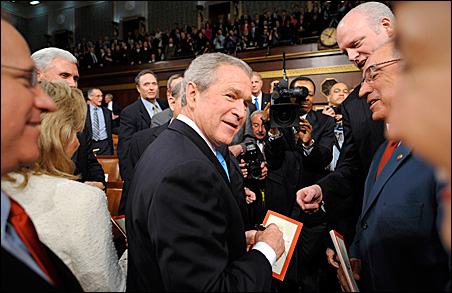 If “I’m still here” was the message of the moment last night, as a number of media analysts suggest, President Bush nevertheless found himself overshadowed by presidential-campaign events.

As William Neikirk of the Chicago Tribune put it, “In his final State of the Union speech, President Bush on Monday tried to accomplish a simple goal: to get a tuned-out America to listen to him about fundamental issues of war, peace and a troubled economy.” Yet his words “might fall short in restoring even a semblance of the political power he once held. A president’s voice is his most powerful tool, but the power is lost if people are no longer listening.”

“In the moment that the country reserves most specially for its president,” he added, “Bush’s timing was at best unfortunate. His address was bracketed by hotly contested presidential primaries in both parties, in which members of his own Republican Party rarely utter his name and Democrats use it as a partisan punch line.”

The president’s speech also had the misfortune to follow a latter-day Camelot moment. “The speech in Washington Monday that generated the most electricity wasn’t Bush’s final State of the Union,” wrote Paul West in a Baltimore Sun analysis.

“It was Teddy Kennedy endorsing Barack Obama. So it might have been at least a mild shock to viewers to see Bush on TV and realize that he still has a year left in his term. Bush’s biggest challenge might simply have been to make a compelling case, as another beleaguered president once put it, that he’s still relevant.”

Indeed, as Susan Page pointed out in USA Today, “Even though Bush hosted a luncheon with TV network anchors Monday to tout his speech, they led the evening newscasts with Massachusetts Sen. Edward Kennedy and Caroline Kennedy, the brother and daughter of late president John F. Kennedy, endorsing Illinois Sen. Barack Obama for president.”

Return to rhetoric noted
The president’s speech covered a lot of ground, from the economy to the war in Iraq to specific goals for his last year. But many speech watchers noted a frequent return to past rhetoric and congressionally rejected issues. In domestic affairs, the Los Angeles Times wrote, “the president implicitly acknowledged that his main goal in his final year is to complete ‘unfinished business’ from the first seven, not to blaze new trails. Unfinished old initiatives outnumbered new ideas in the speech roughly 3 to 1, and the scale of the new proposals was notably modest.”

Kenneth M. Duberstein, chief of staff during President Reagan’s last year in office, told the Times: “He’s playing out his last year from a difficult position. He has an economy that seems to be going downward, at least in the perception of the American people. He has an Iraq where people seem to say, ‘The surge is working; so what?’ And he has a popularity rating in the low 30s, which doesn’t give you any margin for victory.”

Oddly enough, Bush now bears some resemblance to the president whose policies he tried to avoid earlier in his presidency, wrote Peter Baker in a Washington Post analysis.

“After years of confrontation with North Korea, Bush made a deal to get Pyongyang to abandon its nuclear program, a pact that in some ways mirrors Clinton’s agreement in the 1990s. After years of eschewing direct involvement in Middle East peace talks, he has embarked on an intensive personal effort to reach a deal by the end of his presidency.”

Whether he can actually reach such a deal, or even a few of his goals for 2008, however, is widely questioned. To that point, the comments of John Dickerson on slate.com articulated common post-speech themes (though more colorfully than most). “Part of the president’s goal was to remind Congress and the American people that he’s still relevant, but other than the executive orders he promised and the Middle East peace initiative he committed himself to, he didn’t do anything in his speech to prove that relevance,” Dickerson wrote. “He extended no great hand to the opposition, and the laundry list of programs he ticked off — which he knows mostly won’t get passed in an election year — look only like an attempt to box in Democrats by raising expectations about what they can achieve.

“His opponents reacted accordingly. By the end they looked a little sour, as if they’d been snacking on mustard packets.”