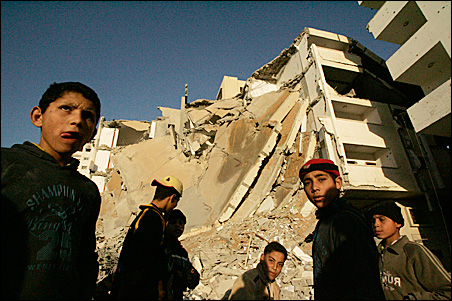 REUTERS/Mohammed Salem
Palestinians in front of Hamas’ Interior Ministry in Gaza after the building was hit today by an Israeli missile.

President Bush returned home this week after his first trip to the Middle East where he had hoped to encourage the Israeli-Palestinian peace process, solidify U.S. allies against Iran and urge the Saudis to ease up on the price of oil by increasing production.

But he came back to Washington “mostly empty-handed, said several analysts and politicians throughout the region,” reported McClatchy’s Hannah Allam in the Seattle Times. “Arab critics deemed Bush’s peace efforts unrealistic, his anti-Iran tirades dangerous, his praise of authoritarian governments disappointing and his defense of civil liberties ironic.” (Allam, by the way, used to be a reporter at the St. Paul Pioneer Press.)

The president discovered that things change quickly in the Middle East and that events in real time sometimes affect the best-laid plans. A day after the Israeli Prime Minister Ehud Olmert and Palestinian Authority President Mahmoud Abbas met to rekindle talks begun last month in Annapolis, Israeli troops, responding to rocket attacks, entered the Gaza Strip and killed 19 Palestinians, most of them Hamas gunmen. A Palestinian sniper killed a farmer from Ecuador working on a Kibbutz in Israel. A number of Israelis were injured in rocket attacks. A day later three Palestinian civilians were also killed.

After two days of fierce fighting, Haaretz reported that the Israeli Defense Forces were willing to call off military action if Hamas stopped firing rockets into Israel.

But the renewed fighting had already threatened the peace talks, with Palestinian officials calling Israeli military action a “massacre.” The Jerusalem Post quoted a Palestinian official as saying, “Israel is strengthening Hamas and undermining the credibility of the Palestinian Authority,” which is based in the West Bank.

Hamas also said that Israeli raids into Gaza would jeopardize the chances for release of Israeli solider Gilad Shalit, whom Hamas has held captive since 2006.

In Saudi Arabia, the president, despite announcing a $20 billion military aid package, “faced difficulty in convincing his Saudi hosts to wholeheartedly support the twin pillars of his tour — greater backing for the Middle East peace process and a willingness to confront the ‘threat’ of Iran,” wrote Aljazeera.

Maureen Dowd, in her inimitable style, put it this way in The New York Times: “His [Bush’s] message boiled down to: Iran bad, Israel good, Iraq doing better. Blessed is the peacemaker who comes bearing a $30 million package of military aid for Israel and a $20 billion package of Humvees and guided bombs for the Arabs. Like the slick Hollywood guy in ‘Annie Hall’ who has a notion that he wants to turn into a concept and then develop into an idea, W. has resumed his mantra of having a vision that turns into freedom that could develop into global democracy.”

The president himself maintained a sense of optimism about the trip and the prospects for an Israeli-Palestinian settlement before he leaves office a year from now. In an interview with ABC’s “Nightline” from Saudi Arabia on Tuesday, Bush said: “I have talked to these leaders face to face. I have asked them point blank, ‘Do you understand how difficult these issues are?’ Yes. ‘Are you prepared to make the painful political compromises?’ They say they are.”

‘I view myself as peacemaker’
The president also said that he feels misunderstood in the Middle East.

“My image [is] ‘Bush wants to fight Muslims.’ And, yes, I’m concerned about it. Not because of me, personally. I’m concerned because I want most people to understand the great generosity and compassion of Americans.

“I’m sure people view me as a warmonger and I view myself as peacemaker,” the president said. “They view me as so pro-Israeli, I can’t be open-minded about Palestinian peace, and yet I’m the only president ever to have articulated a two-state solution. And you just have to fight through stereotypes by actions.”

And even some of his critics said they sensed a bit of change in Bush during the trip. Matthew Price, reporting for the BBC, said: “For many years I watched this president from afar while reporting from the Middle East. What has been interesting watching him up close is how, on occasion, his understanding of the issues has seemed far more nuanced than in the past. I spent four years talking to people who loathe the man…On this trip, though, there seems to have been a slight change. George W. Bush has appeared more balanced in his public statements.”

Price concluded that “when Mr. Bush addressed staff at the U.S. consulate in Jerusalem I am told the president welled up with emotion as he spoke of the importance of what he was trying to do. He really believes in his strategy. Many will call that naïve. A handful may call it visionary. The reality is that belief alone will not bring peace to the Middle East.”

The success or lack thereof of such a presidential trip may not be known until weeks or months from now. In an open letter to Bush written before the trip, long-time peace negotiator Dennis Ross advised him to ask the Israelis and Palestinians “how they can be convinced to deal with the core issues of the conflict. By doing this, you can give the process you launched at Annapolis its best chance. It may, in fact, be your last one before the momentum you hoped to create is lost.”