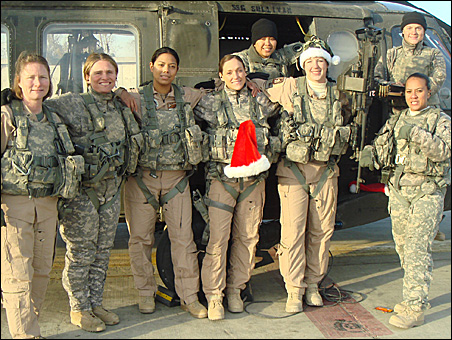 LSA ANACONDA/BALAD AIR FORCE BASE, IRAQ — On Christmas Day 2007, a little less than a month ago, the 2-147th Assault Helicopter Battalion, based in Minnesota, flew a historic Blackhawk mission under combat conditions into, and around, Baghdad. 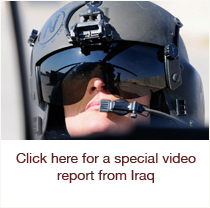 The mission had the sense of history about it because every soldier in the two Blackhawks — all four pilots, all four door-gunners — was female. The two major briefings for the mission, by the S2 (intelligence) and S3 (operations), were also done by women.

Chief Warrant Officer Teresa Burgess of Olympia, Wash., was the air mission commander. That put her in charge of the overall mission and in one of the four pilots’ seats. “It was fun,” said the veteran pilot. “We never had a chance to do that before — eight women on two aircraft. Pretty neat.”

Did it worry her? Had she considered the reaction if something went wrong? “I thought about it the night before, but I’ve been training for years. I can do the job professionally and correctly, which is important in a combat zone. The question about competence wasn’t out there. We knew we could fly the mission.”

Now’s the time for all good women…
Nobody is actually sure where the idea for the mission came from, but it might have been from the battalion commander, Lt. Col. Greg Thingvold, of Stillwater. Thingvold is intensely proud of the National Guard, and is adamant about the merits of getting more females into the military. Traditional female roles are fine, he said, “But young women should know that there are more options out there. Lots of them. And the training is available in the military.”

Capt. Andrea Ourada, of Lucan, Minn, said that when Thingvold started to push the idea, the female pilots began to look at the possibility. “We weren’t trying to prove anything, really — it’s just that it hadn’t ever been done, and we had enough women in the battalion to pull it off. We couldn’t find any other [flight] battalion that ever could have done it. Not under combat conditions, anyway.” 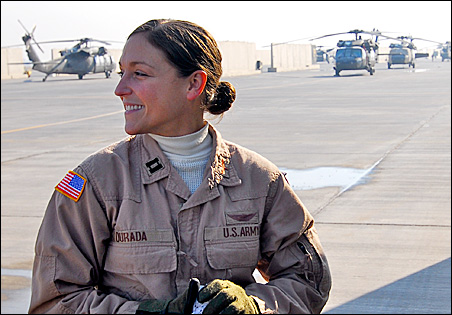 MinnPost photo by Eric Bowen
Capt. Andrea Ourada, of Lucan, Minn., piloted one of the Blackhawks.

The 2-147th, though based in Minnesota, includes elements from Washington and Hawaii for the Iraq deployment.

The mission itself was virtually identical to the missions flown by the 2-147th almost every day of the year — moving out from Balad, the battalion transports troops, officers, politicians (just the other day, Secretary of State Condoleezza Rice) and high-value small objects around the country. They get shot at while they’re doing it.

Michelle Smith, of Houston, Minn., is a staff sergeant, a crew chief and a door-gunner. She volunteered for Iraq and thought the Christmas mission was “cool.”

She has been in the guard for more than 17 years, and when not on active duty, commutes to Ft. McCoy, Wis., where she works as a firing-range safety officer and is more than familiar with weaponry. She’s one of the people who thinks that the Blackhawks are frequently fired at, even if not often hit: “Fortunately,” she says wryly, “the enemy has not been trained really well on their weapons systems.”

She leaves the impression that if Michelle Smith were training the insurgents, the Blackhawks would be in a lot more trouble. 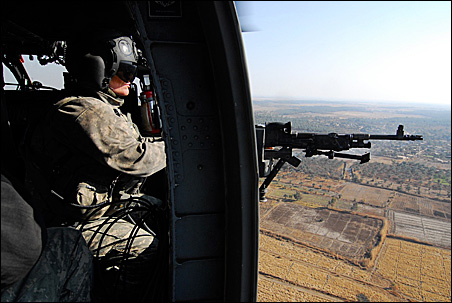 “Women should do more in the military than just pushing paper, and the Christmas mission was a chance to show off a little,” she said. Smith has an immediately engaging smile, an earnest smile. She volunteered for Iraq because she’d been training people for deployment. “This is my second family out here. I volunteered to come because I knew the rest of my people were going, and if I didn’t, who was going to take care of them?”

Pressure and perspective
CWO Angie Barros, from Monticello, Minn., another of the pilots on the Christmas flight, said that when the idea for the mission was first floated, “I got a little stressed about it.”

“This was going to be a supposedly historical event. Then I began thinking about why it should be historical. We do this. This is routine. I was amazed that it hadn’t been done before. After I started thinking that way, I was fine.”

The mission was fine, she said. “Showtime” — when the pilots and crew show up for the first morning briefings — was at 4:20 a.m., with “wheels-up” a little after 7. “We took off on time, made the stops on time — just a very smooth mission, overall,” she said.

Capt. Phoebe Inigo, from Hawaii, was the pilot most excited about the symbolic aspect of the flight. She comes from a “not very good neighborhood” on Oahu, she said, and the National Guard paid for her college education. “More girls need to know they can do this. That there are opportunities. Other people from my neighborhood who went to college, if they could even get through, they’d have debts like $30,000. I had zero. And I got to fly. And here I am. I like it.” 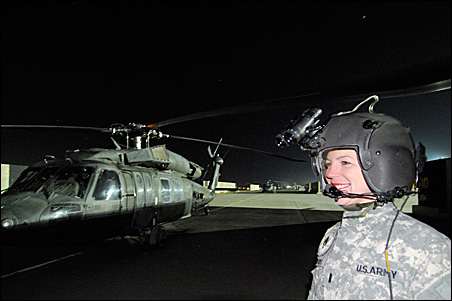 Photo by Sgt. Dale Sweetnam
CWO and pilot Angie Barros, of Monticello, Minn., remembers being “amazed that it (an all-female mission) hadn’t been done before.”

Inigo had worked extensively with the Guard in recruiting efforts in Hawaii, especially in her old neighborhood, going around to the schools, telling people what was available through the military. “That’s where the Christmas mission can be valuable. You say, ‘Look, this happened. I flew it.’ Would you like to do something like that? What would you like to do?”

Changing roles, attitudes
In addition to the pilots and Sgt. Smith, the Christmas mission included crew chiefs Leilani Aho, from Washington, and Michelle Aina and Crisaron Voeuth, from Hawaii. Crew chiefs are qualified to do maintenance on the helicopters, in addition to working as door-gunners during the flight. They were on leave or unavailable for comment for this story.

Burgess, the air mission commander on Christmas, said one unhappy aspect of the landmark mission was that she missed her husband and two sons, ages 16 and 12, on the holidays. “They miss me, but they don’t really express it much. This is sort of old-hat for them — they’ve been with the military as long as they’ve been alive, and they know that this happens.”

Burgess has been in the military, in one way or another, for 25 years — 10 on active duty, 15 with the guard — and has seen things change over the years.

“Attitudes [toward females] have changed. There are still some problems, but not like it used to be. I’ve had people get out of my helicopter when they found out a woman was flying it. I still have people say, ‘You know, you’re the first woman I’ve ever flown with.’ A lot of things have changed that over the years. The Christmas mission was another step in the process.”