You’ve got to see this YouTube clip (above) to understand the Oscar Pistorius phenomenon.

When you do, your jaw will drop. You will watch more than another 400-meter race. You will witness a man with no legs falling behind at the start, surging like a race car towards the end, competing with elite athletes with two legs, and finishing second.

You will observe the promise that Pistorius, a double amputee from South Africa, holds for the disability rights movement in — and out — of sports. Before your very eyes, sports’ newest and most complex Pandora’s box will open.

What is fairness? Do Pistorius’ carbon fiber prosthetics — his augmented legs finished off with j-shaped blades — serve as technoboosters or as legitimate substitutes for human legs? Are they just a very fancy pair of Nikes?

Artificial limbs banned from Olympics
Last week, the international track federation said his artificial limbs should prohibit him from competing at the Olympics. He must remain a competitor at the Paralympics, the global event for various classifications of athletes with disabilities, an event, unfortunately, that gets secondary attention from the world’s media and sports fans.

Pistorius’s so-called “Cheetah” add-ons hint at the possibilities of a futuristic wide world of sci-fi sports, in which a cyborg athlete relies on mechanical aids and motors, not to mention your standard run-of-the-mill performance-enhancing drugs and genetic engineering.

But Pistorius, 21, is no cheater. He is not “dirty,” like too many able-bodied athletes trying to get an edge with against-the-rule pharmaceuticals. A gold medalist in the Paralympics, he’s doing what he needs to do to compete at the highest level.

For now, that’s the able-bodied level. For now.

“This guy is doing something right,” said Troy Engle, the head coach of the U.S. Paralympics track and field team. “Whatever he’s doing, it might be a little bit of help, but it’s not a magic wand. He got there through hard work and fantastic athleticism and that’s got to be the starting point of any conversation. There’s got to be the recognition that he’s the real deal.”

Watching Pistorius run — and produce results approaching qualifying times for the Beijing Olympics – gives new meaning to “pushing the limits.” It also raises the fundamental question of how we should measure personal achievement in sports … nay, in life. 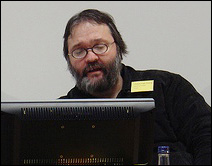 “Is it important to be the best or to give your best?” asked Professor Gregor Wolbring, of the University of Calgary, who sits on the University of Minnesota’s School of Public Health’s advisory board on human rights and health. “If it’s about giving your best within your given situation, then all athletes should be in the Olympics.”

He offered an analogy.

Still, gazing into the future, Wolbring said, if Pistorius would jump from the Paralympics to the Olympics, he could be the pioneer who blazes the trail of turning “legged athletes” into the underclass.

“What if legged people are second best?” Wolbring asked. What if Pistorius or another amputee with a permissible mechanical device wins a race. “What will that say?”

Could he change our view of all people with disabilities? Is that YouTube clip — and the clarity of his heart, his guts, his athleticism – that powerful?

Where he stands
Here’s the situation: Pistorius was born without shin bones. As an infant, his legs were amputated below his knees. Since he was a teenager, he’s been competing with the carbon-fiber j-shaped prosthetics. He’s got a nickname: “Blade Runner.”

He’s only a second off the able-bodied Olympics qualifying time in the 400-meters.

But, recently, a German biomechanics lab, commissioned by the International Amateur Athletics Federation, said his blades gave him an unfair advantage over able-bodied athletes. That’s quite a conclusion considering the man has no human legs at all.

Pistorius is appealing. Mechanics and stored energy aside, the man is an incredible physical specimen. The New York Times produced a marvelous graphic last week that displayed just how strong Pistorius must be through his hips to drive his prosthetics and create his speed.

Questions, issues, realities
In the able-bodied sports world — the “normal” sports world — don’t individual athletes have all sorts of subtle and clear-cut advantages over others? Of course, they do.

“There is no such thing as a level playing field,” said Jim Ferstle, the Twin Cities resident expert on performance-enhancing drugs and a noted writer on sports science topics. “Everyone has an advantage or disadvantage of some sort.”

Nike and Adidas frequently produce new super-shoes or new aerodynamic running outfits for their sponsored jocks. Such advances are touted. They are legal.

Pole-vaulters have been improving the boost in their poles for years, moving from bamboo to carbon fiber. Short, slender marathoners will have distinct advantages in the heat and humidity of Beijing. American athletes with middle-class upbringings presumably have a leg up on poverty-disadvantaged Ethiopians. (Or do they?)

Major League Baseball pitchers undergo “Tommy John” surgery, moving tendons from one part of their body into their elbows so they can pitch again, and, some say, better than before.

Summer and winter endurance athletes — who can afford it — sleep or live in hypoxic chambers, or low altitude tents, in an effort to increase their red blood cells and cardiovascular capacity. In 2006, the World Anti-Doping Agency, or WADA, considered banning the use of those chambers because it’s “against the spirit of sport.” But WADA backed down.

Pistorius isn’t. No one says he is. But, said Ferstle, “You’ve got to draw the line somewhere. But where’s the rational point of doing that?” 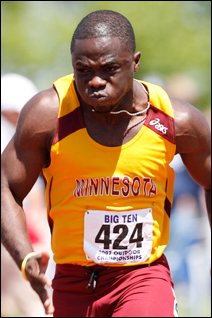 Courtesy of the University of Minnesota Athletics Department
Ibrahim Kabia

“As much as people would love to see him compete — I’d love to see him compete — but in track and field, you can’t have an unfair advantage over other athletes, and I think he does,” Kabia said before a workout last week. “I think it’s unfair for me to have to compete against him. It says, according to the rules that you can’t have any technical device that would enable you to perform better than you would without it. I hate to say it, but he’s got springs.”

But his supporters argue that Pistorius’ case is different. In a world in which a hundredth of a second is the difference between gold and silver, he’s not seeking an edge for victory. He’s seeking a means to compete. He’s also running for respect.

Without his very elastic blades, he’d be back wearing the more traditional artificial legs of the Paralympics. He’d be relegated to second-class citizenship.

For, indeed, the Paralympic athlete is viewed as “not as good,” as “not normal.” Isn’t that against the spirit of sport? Aren’t athletes with one-leg or none, who are blind or in wheelchairs, isn’t their struggle at the essence of sport? And shouldn’t we make accommodations for them?

“There is a danger,” Paralympics coach Engle said. “The danger is that people claim that somehow [athletes with disabilities] are at an advantage by their physical disability. I don’t think anybody with real thought can conclude, ‘What a blessing it is for someone like Oscar to be born without lower leg bones.’ “

And it’s not just the physical nature of sports that Pistorius’ case serves to galvanize. It’s the political, too, the human rights issue.

Wolbring calls it “a hierarchy of worthiness … Disabled people who achieve are treated all the time as a ‘supercrip,’ the one who against all odds overcomes. Be that person a professor at a university or an athlete, he becomes a supercrip because he outdoes the low expectations … If only we would accept everyone for who they are.”

The future
Last May, the international track federation’s director of development, Elio Locatelli, in referring to Pistorius’ blades and saying he must compete in the Paralympics, told the New York Times: “With all due respect, we cannot accept something that provides advantages. It affects the purity of sport. Next will be another device where people can fly with something on their back.”

Indeed, Pistorius’ prosthetic manufacturer is already working on bionic feet with battery-powered hydraulics. Where does the path Pistorius is running take us?

If the scientific studies have shown anything, it is that his added height and the elasticity of the blades are what helps him the most. Will able-bodied athletes seek a similar boost?

“I don’t think it’s that far of a stretch if an [able-bodied] athlete said, ‘What if I strapped these things to my shoes and extended my sound legs?’ ” said Paralympic coach Engle. “Athletes are athletes; they’ll try anything.”

George Dvorsky, a Toronto-based futurist, has written at his blog, “Imagine a hockey team that communicates techlepathically, or basketball players with improved peripheral vision. There could be ambidextrous switch pitchers and skeet shooters with enhanced visual fields.” 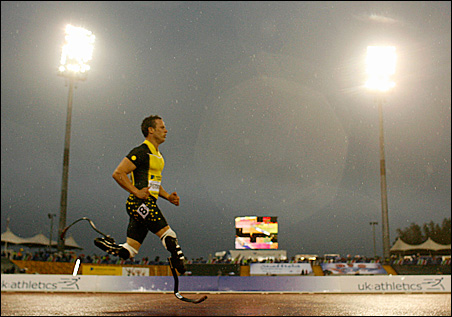 In the end, Wolbring envisions a future Olympics with its own classifications. Division I might allow steroids and human growth hormone. Division II might ban drugs, but allow special shoes or fins on uniforms. Division III might allow prosthetics and extra-skeletal devices. “Luxury editions,” said Wolbring. (Imagine a pole-vaulter or high-jumper with a bionic leg.)

Division IV might be your basic guys and gals in shorts and T-shirts.

“The ones with normal legs will be viewed as kind of cute, but I’d rather watch the guy who can run the 100 meters in five seconds,” he said. “We’re into gadgets, right?”

Pistorius is no gadget. He’s an athlete, a new form of athlete leading sport further into the unknown. He’s turning on its head the notion of an athlete with disabilities.