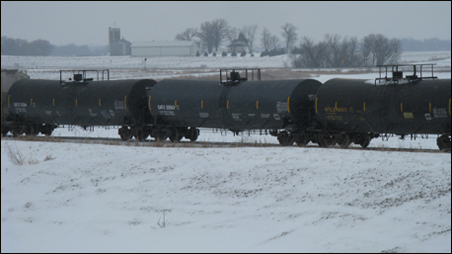 From President Bush to the American Lung Association, politicians and special interests aggressively push corn ethanol as an environmentally friendly solution to the nation’s energy problems.

“The less oil we use, the better stewards of the environment we will be. So that’s why I’m a big promoter of ethanol,” Bush told an Arkansas audience in October, noting that his administration set a mandatory goal for reducing gasoline usage by 20 percent over the next 10 years.

But as the corn ethanol industry takes root in Minnesota and other farm states, scientists and agriculture experts are less sure of the benefits of corn ethanol as an ecologically cleaner option for gasoline-powered vehicles.

And at least one study indicates that increased use of ethanol blends would make little difference in improving the Twin Cities’ air quality.

Experts generally agree that greenhouse gas emissions from ethanol are lower than from gasoline. But the process of mass production of the fuel — especially if made from corn — results in other environmental problems that offset some of ethanol’s advantages.

Growing vast amounts of corn for ethanol requires using vast amounts of water, herbicides and fertilizer. Further, the crop is hard on the soil, and much of what is planted is untested genetically modified seed stock. In addition, the processing facilities themselves demand even more water to produce ethanol — and at the same time give off an odious smell and increase local air pollution and traffic from trucks servicing the plants.

“We respect the development of first generation biofuels for rural communities and farmers,” said Don Arnosti of the Institute for Agriculture and Trade Policy in Minneapolis. “We also recognize the unsustainable nature of it — it’s only a baby step in the direction we’re looking for.” 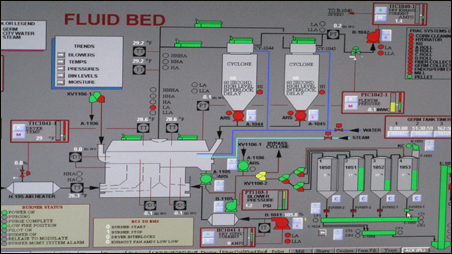 The process for making ethanol is displayed on a computer screen in the POET plant’s control room.

The biofuels industry is promoting ethanol with all the resources it can muster. It has found an ally in the American Lung Association of the Upper Midwest, headquartered in St. Paul, which views the fuel blend E85 (85 percent ethanol, 15 percent gasoline) as beneficial to air quality, potentially lowering the wintertime carbon monoxide build-ups in the Twin Cities. The Lung Association sees ethanol and other biofuels as an immediate way to cleaner air, with the emphasis on immediate.

“The one thing we know — if we can reduce the amounts of harmful pollutants we are pumping into our air, it can only be a good thing for air quality and human health,” said the Lung Association’s Tim Gerlach.

“E85 ethanol is just one wedge in a pie of solutions that include higher fuel economy standards and conservation,” he said. “We must do better. Ethanol is not perfect. No fuel is perfect. However, both ethanol and biodiesel are solutions we can produce here, closer to home — from renewable sources.”

Ethanol plants also provide a much-needed economic boost for rural Minnesota. America’s farmers responded to Bush’s proposals by planting more than 93 million acres of corn in 2007, the most since 1944, when the U.S. Department of Agriculture reported 95.5 million planted. Corn prices surged to $4 per bushel and then fell into the mid-$3.50 range after languishing around $2 most of the time since the 1970s.

Water issues
The process of making ethyl alcohol at big distilleries comes under fire from environmentalists who worry about the amount of water that the plants consume. “Water is the glaring environmental problem with the ethanol plants,” said Janette Brimmer, a lawyer with the Minnesota Center for Environmental Advocacy. “It’s a water availability issue because it uses so much.” The organization has contested some ethanol plant permits on the basis of water availability.

In 2005, Minnesota’s 15 ethanol plants — now there are 17 — consumed about 2 billion gallons of water. Improvements have been made in water recycling, but it still takes between three to six gallons of water to make a gallon of ethanol.

At least one proposed ethanol plant in Minnesota, near Pipestone, did not get built because of concerns over a lack of water to run it. In 2006, a plant in Granite Falls asked the state to pump water from the Minnesota River after its underground aquifer was insufficient.

And it takes hundreds of gallons of water — in rain or irrigation — to grow the corn to make the fuel. 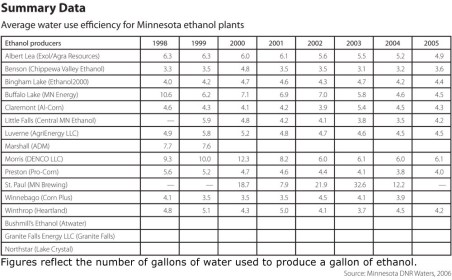 An October 2007 report from a National Research Council committee said that if projected corn ethanol production increases take place, “the harm to water quality could be considerable, and water supply problems at the regional and local levels could also arise.” One of the study’s authors, Jerry Schnoor, a University of Iowa professor of civil and environmental engineering, told the Washington Post: “The environmental constraints are just too great. It’s too much nutrients, too much soil loss, too much pesticides. We don’t have the land.”

Grain farming puts stress on underground water supplies whether ethanol is in the mix or not. But high commodity prices have brought more land under the plow for corn. Nineteen million additional acres of irrigated corn were put into production across the country in 2007. Martha Roberts and her colleagues at Environmental Defense completed a study last fall of potential water use on the Ogallala Aquifer (which covers Nebraska, Kansas and other Western states) in which they concluded that the aquifer depletion would “exacerbate conflicts if water is already scarce.”

Fertilizer run-off
All that corn needs nutrients to grow and protection from pests, putting pressure on farmers to continue to use fertilizer and herbicides.

The story of corn fertilizer, mainly nitrogen, and its relationship to the eutrophication of our waterways, including the 7,900-square mile “dead zone” in the Gulf of Mexico, has been told before. Excess fertilizers and manure spill into the Gulf, causing a phytoplankton bloom, which decomposes in such a way to suck the oxygen out of the water, suffocating fish, crabs and shrimp.

In Minnesota, phosphorus runoff from eroded soil is a problem. Phosphorus settles into fresh water sinks, resulting in algae blooms and fish kills in places like Lake Pepin.

Rising prices for corn also increases the odds that fallow or set-aside farmland will be put back into production. Wildlife that has benefited from the Conservation Reserve Program (CRP) and other government set-asides find less habitat when CRP land is plowed under. Minnesota lost about 80,000 acres of CRP land in 2007, most of it to corn production.

Additional stress is put on the environment by the location of large animal feedlots near ethanol plants; livestock are fed the leftover grain. “There are a few plants in Nebraska and Kansas that were strategically located near large beef feedlots to allow them to market wet distillers [grain] and save on drying costs,” said Jerry Shurson, an animal science professor at the University of Minnesota.

Neighbors worry about the smells and increased truck traffic around plants and feedlots. A citizen’s group near Eyota, Minn., is fighting a proposed plant in Olmsted County. Complaints from neighbors and financial problems led to the closure of the Gopher State Ethanol plant on the grounds of the old Schmidt Brewery in St. Paul in 2004.

Herbicides and GMO corn
Some of the herbicides used on cornfields — and 96 percent of U.S. corn acreage is treated with agrochemicals — have been linked to hormonal problems in aquatic creatures. Atrazine, the most popular, has been banned by the European Union since 2004. The Environmental Protection Agency warns that acute exposure to Atrazine can cause “congestion of the heart, lungs and kidneys; low blood pressure; muscle spasms; weight loss, [and] damage to adrenal glands.”

More and more corn planted today is from genetically modified seed — about 60 percent of the total U.S. crop, by one count. Not much research has been done on the long-term effects of these genetically modified organisms in the food supply, and critics want the EPA to maintain tighter oversight over GMO crops.

Even the cleaner-air-with-ethanol notion has been called into question. Mark Jacobson, an atmospheric chemist at Stanford, tested the idea that a switch to ethanol would improve human health in smoggy cities. He found that ethanol was not a cure-all.

“It’s true that ethanol does decrease some pollutants, but it also increases some others,” Jacobson said. Compared with gasoline, ethanol tends to produce less benzene and butadiene, but more acetaldehyde and formaldehyde when burned, he said.

Since atmospheric chemistry differs by city, ethanol byproducts are more of a worry in some places than others. In the Twin Cities, Jacobson said, the use of ethanol blends would not make much difference.

“E85 increases organic gases and decreases oxides of nitrogen relative to gasoline,” he said. “In most locations, including the Twin Cities, this had the impact of increasing ozone, a corrosive gas that causes and exacerbates respiratory illness and asthma and increases mortality associated with both.” Jacobson’s test indicated that a complete conversion to E85 would lead to a very small 1 ppbv (part per billion by volume) increase in ozone in the Twin Cities.

Ethanol proponents point to a study by the Energy Department that said ethanol reduces greenhouse gas emissions by 18 to 28 percent, so long as the plants making it burned something other than coal. In 2006, the use of ethanol reduced CO2-equivalent emissions by 8 million tons, which is like taking 1.2 millions cars off the highway.

Most experts agree that ethanol made from something other than corn has the best chance to be more environmentally friendly. Switchgrass, wood chips and other sources of cellulose fiber are possible sources, as is factory refuse. “We see waste generators as one of the new ethanol producers,” said David Kreitzer, former CEO of Gopher State Ethanol.

Mark Neuzil, a former reporter and editor for the Associated Press, the Star Tribune and several other newspapers, covers the environment and agriculture.

The corn ethanol industry has taken off in Minnesota, benefiting many rural areas. How did this happen? Subsidies fueled by politics and lobbying.

Politicians and special interests aggressively push corn ethanol as an environmentally friendly solution to the nation’s energy problems, but scientists and agriculture experts aren’t so sure.

Part 3: Ethanol reduces need for imported oil, but its energy savings are costly

The federal government pays 51 cents of the cost of every gallon of ethanol you buy, prompting this question: Is ethanol worth it?

Production of corn ethanol is rapidly expanding, but plans are underway for a “next generation” renewable fuel — and Minnesota’s rural areas could reap huge benefits.

Making fuel: A video on how corn becomes ethanol: