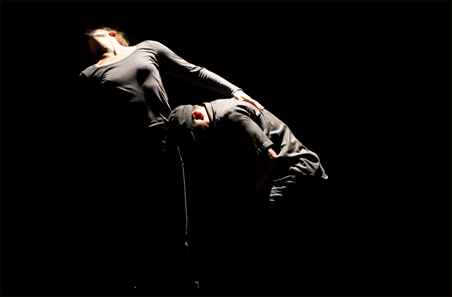 Photo by Randy Karels
Carl Flink and Leslie O’Neill in a duet from “Wreck,” a challenging, visceral work that focuses on how individuals confront their impending deaths.

“The hook for the piece is that everybody dies,” he says.

The premiere of Flink’s 70-minute dance work will be performed Jan. 11-20 by his 13-member company, Black Label Movement, at Southern Theater in Minneapolis.

The non-narrative work deals with what happens emotionally and physically when people are trapped inside a watertight compartment of an ore boat resting at the bottom of Lake Superior. The setting is conveyed metaphorically by four benches placed around the dancers in a compartment-like square.

“The people in this work,” Flink explains, “are sunk some 300 feet below the surface of Lake Superior. They’re all going to die, for any number of reasons. It’s getting cold. They’re running out of air. They could become violent toward one another. So the piece is really about how we choose to go into our deaths. In this way, it’s a metaphor for life. We all have a beginning and an end. What happens in the middle is what’s important.”

For those who have seen performances by the 2-year-old company, two sections in the middle of “Wreck” will be familiar. “Duet from Wreck,” a work of heartbreaking physicality and tenderness performed by Eddie Oroyan and Miriam Castro (who has since left the company), is a centerpiece. “Compartment Cell” features Flink and the dancers flinging, swinging, carrying, pulling, pushing, crashing into and softly holding one another within a space demarcated by the wooden benches.

“To me, those early pieces, both of which exist inside ‘Wreck,’ represent a short story or short film through which I started visualizing a larger entity,” Flink says. 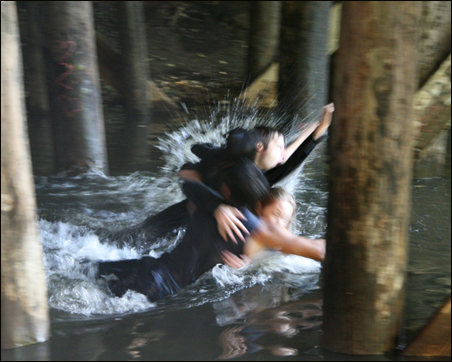 Photo by William Cameron
To convey the mood of “Wreck,” promotional photos such as this one were taken in the lagoon between Lake of the Isles and Cedar Lake. They will be part of an installation at the Southern.

Idea started with stories from ore boats
Part of Flink’s inspiration came from the stories his father and uncle told about being ore-boat crewmen in the 1950s. But Flink also knew “there were more depths I wanted to explore in a longer work that I had only touched on in a longing partnership looking for connection [‘Duet’] or highly physical examination of people negotiating their survival inside a tiny room [‘Compartment Cell’]. So I’ve used those two sections as leaping-off points.”

BLM began working on “Wreck” in September 2006 with a $40,000 “Symposium Award” from the Institute for Advance Study at the University of Minnesota. Flink is the director of the U’s dance program and a collaborative researcher within the IAS. Last June, BLM was granted nonprofit 501[c]3 status. And last September, the company received another $13,700 grant from IAS.

One of the criteria for accepting the grants was that the development of “Wreck” would include “an extremely revealed creation process,” Flink says. The company held six open rehearsals at the U’s Barbara Barker Center for Dance, during which Flink invited extensive interpretation and commentary from the audience.

“The idea was to transform audience members into participant observers,” he says. “It wasn’t about people telling us to do this or not do that; it was about hearing their thoughts and feelings about what they’d seen, so we could know what we were communicating through movement. In the process, we received insights we would never have come up with ourselves.”

In one section, “we put our hands on each other’s faces, put our fingers into each other’s mouths; it’s really intrusive,” Flink explains. “People either thought it was funny, were amazed at how much the dancers trusted each other, or called it cannibalizing. To hear that spectrum of comments gave me pause. I wondered if the section was too diffuse? Or was it valuable that it has myriad interpretations?”

During rehearsal, the dancers worked with whatever music Flink chose that day. Sometimes, they even moved in silence. Because unlike much concert dance, which is often choreographed to recorded music, Minneapolis composer Mary Ellen Childs was at work writing a score for “Wreck,” funded by IAS monies and a $16,450 grant from the U’s College of Liberal Arts grant-in-aid program.

Writing a score along the shore She based her score on what she saw and experienced during rehearsals. But she also rented a cabin on the North Shore of Lake Superior to watch the ore boats and listen to the waves. She visited the Duluth aerial lift bridge and toured an ore boat. She also returned home to Manitowoc, Wis., on Lake Michigan, to watch the ferries, listen to the ships and study the lake.

“It’s been a long time since I’ve written for dance,” says Childs, artistic director of the percussion group Crash. “But once I started thinking of it as scoring a film — that the music could convey an interior world and doesn’t always need to match what’s happening on the stage — then I understood how to do it.”

Some of the score, which will be performed live, is “note-y,” Childs says, explaining that it’s melodic and instrumental. Other portions are more of a “soundscape that I’m having the instrumentalists play — sometimes over the top of pre-recorded music — using unusual techniques and percussion. Like having the bass clarinet sound like a foghorn. Or playing these two large gongs very quietly, so they emit a reverberation that goes right into the cells of your body. The sound conveys really deep water and that something profound is happening.”

Childs says she was drawn to “Wreck” because “it’s a juxtaposition of opposites. Death and life. Open water, big expanses and huge boats, but also tiny compartments and claustrophobia and the loss of air. I’ve always been fascinated with such seeming opposites, because in the end they’re not opposites. Life and death are so completely threaded together.”

In “Wreck,” hope is the binding thread, Flink says. “In a situation like ‘Wreck,’ is there a ‘Lord of the Flies’ moment in which we destroy each other, or do we join hands and plunge into that next unknown place together? And rather than doing the latter as a big ‘Kum Ba Ya’ moment, our interest is in conveying that sense of hope through the intensity of the physical effort we’re making.”

BLM’s often-harrowing, risk-embracing, intensely physical choreography is the metaphor for hope in “Wreck,” Flink adds. “That metaphor is in service to the idea that we, as humans, in our best light are always striving to go further. And I believe the visceral and intense athleticism of our work is something people will always respond to.”