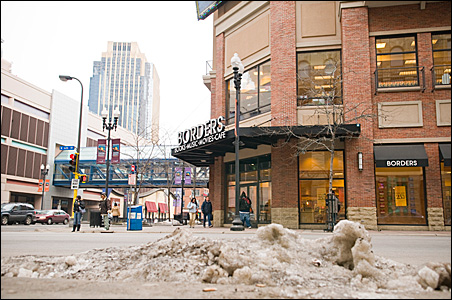 MinnPost photo by John Noltner
Borders Books is the latest among national retailers to leave downtown Minneapolis. To reverse this trend, some experts argue for higher standards for public spaces — like hauling away piles of dirty snow in the winter.

When Nordstrom recently confirmed the selection of Ridgedale for its second Twin Cities store — to open in 2011 — and no one in downtown Minneapolis bothered to blink, well, that was just another reminder of how far down the shopping chain Nicollet Mall has fallen, and how badly downtown’s shopping scene needs a shot of adrenaline.

In the not-so-distant past, Nordstrom’s snub would have caused a furor. But, given the tectonic shifts in retail (online shopping, suburban lifestyle centers, etc.), downtown Minneapolis has grown accustomed — perhaps too accustomed — to playing a diminished role in the metro shopping mix.

Fifteen years ago, downtown was the Upper Midwest’s prime shopping destination. It remains a bit healthier than the retail cores of most major cities. But it long ago lost its dominant role to the Mall of America and other suburban venues, and it shows signs of slouching further toward the kind of eerie retail-free zone that’s increasingly common in American downtowns. (St. Paul lost the bulk of its downtown retail decades ago.) Polo, Crate & Barrel and now Borders Books and Williams-Sonoma are the latest national retailers to depart Minneapolis, explaining that downtown sales don’t keep up with suburban counterparts, a differential magnified by a tough economy.

Indeed, national figures, released on Thursday showed disappointing sales in December, with apparel shops and department stores taking the biggest hit. Given recent trends, downtown stores, both here and across the country, may have suffered disproportionately, further diminishing expectations.

When Apple Computer, perhaps the hottest retail commodity of the moment, recently opened 178 stores nationwide, it located only six of them in big-city downtowns — three in New York and one each in Chicago, San Francisco and Portland, Ore. (MOA, Southdale, Ridgedale and Rosedale landed the four Twin Cities spots).

‘Some positive movement’
The long term isn’t entirely bleak, however, for downtowns that maintain a healthy office and residential core. Creative retailers continue to seek opportunities in those kinds of downtowns, and Minneapolis, with 160,000 employees and 30,000 residents, has the demographic profile to overcome its current status as a shopping underachiever, according to retail experts.

“There’s some positive movement,” said Jim McComb, president of Minneapolis-based McComb Group retail consultants. The recent return of Brooks Brothers and the addition of Len Druskin are good signs, he said. So is the Downtown Council’s new emphasis on retail strategy and recruitment. “Downtown needs to think harder about how it fits into the broader retail landscape,” he said.

Downtown, he said, has many of the ingredients of a budding “lifestyle center,” the magic retail formula of the moment. It has, for example, a nearby affluent population and a sprinkling of the usual “lifestyle” cast members (Talbot’s, Ann Taylor, Banana Republic, Nieman-Marcus, Macy etc.) It also has the kinds of cultural attractions and restaurants to mix with potential shopping success. What it lacks is good design, he said.

What McComb and others mean by lack of design is that city government and the private sector appear to have low standards on public spaces, like sidewalks, and on the architectural details of storefronts. In winter, for example, no one bothers to haul away the piles of dirty snow that bury the parking meters on most downtown streets. No one demands higher quality on the building facades of City Center and other prominent spaces. No one, either public or private, has stepped forward to demand that downtown shopping streets and other public spaces be “drop-dead beautiful,” as in Chicago, Boston or in other successful urban shopping experiences. And no one has yet convinced retailers to turn their stores “inside-out” to embrace Nicollet Mall rather than turning their backs to it. These and other “configuration” problems (including the much-discussed skyway dilemma) are part of what makes downtown a retail underachiever.

“We aren’t getting the kind of design that make people want to linger,” said McComb, who added that parking prices are also far above those in comparable urban shopping districts.

Midge McCauley, a retail consultant at Los Angeles-based Economics Research Associates, said that downtown “could support more retail than it now has” if only it could overcome design constraints. McCauley’s recent report on Minneapolis forms the heart of the Downtown Council’s new retail strategy and provides the basis for council president Sam Grabarski’s prediction that “five years from now you won’t recognize downtown.”

Whether or not auto traffic turns Nicollet Mall back into Nicollet Avenue (one of her suggestions), there will be an active attempt to recruit more stores. The council has hired Ann Wimmer, formerly of Gabberts and Nordstrom, as its recruiter. In a recent interview, Wimmer outlined her thinking.

“We should be more energetic, more varying and more than we are,” she said, adding that downtown must set itself apart not only from the suburban malls but from the successful neighborhood nodes, like Grand Avenue and 50th and France.

SoHo flavor to Hennepin Avenue
Shopping, she said, has become “experience driven.” People shop where they think they’ll have the least chance of failing to find what they want — and they shop to make a statement about themselves. Her goal is a blend of price points and an eclectic mix of stores, many of which you wouldn’t find in a mall.

Her first aim is to give Hennepin Avenue a bit of a SoHo flavor — before the downtown Manhattan district went upscale and mainstream. That means edgy art galleries (perhaps with studio space), unique clothing and home furnishings, interspaced with the theaters, bars and restaurants already there. The hope is to create a critical mass of positive on-street activity that would give theater-goers the courage to actually stroll down the street to look for interesting shops rather than making a nervous bee-line to their cars or tour buses.

Wimmer’s second aim is to fill in Nicollet’s blank spots with more lifestyle-type shopping attractions. She declined to mention names but presumably she’s talking about Patagonia, Pottery Barn, Z gallerie, White House/Black Market and other such favorites, as well as out-of-market finds like Escada, Eileen Fisher, and Bailey Banks & Biddle. But what’s really new in shopping, she said, is that people will buy a $400 jacket to wear with a $10 t-shirt. Nicollet should have both kinds of stores, she said, making it not quite the quintessential “lifestyle” shopping experience but something more “authentic” and tuned to “Minnesota sensibilities.”

A third aim is to remake Seventh, Eighth and other connecting streets into attractive walkways to encourage people to shop both on Nicollet and Hennepin. Meanwhile, street-level businesses catering to transit customers might be attractive for Marquette and Second Avenues, which will become transit spines. As presented in a new report from the urban market consultants, ZHA Inc, of Annapolis, Md., there’s also retail potential surrounding proposed supermarkets at each end of Hennepin Avenue.

Unique stores, prestigious niches
The study portrays downtown as under-retailed, and expects growth to match the eight to 12 new major office buildings projected for downtown over the next 12 years. But it cautions that downtown is unlikely to draw the ultra high-end stores that dot Chicago’s North Michigan Avenue, San Francisco’s Union Square or Boston’s Newbury Street. Even with its condo growth, downtown Minneapolis simply lacks the neighborhood buying power to support prestigious stores. “High-income suburban neighborhoods … are more likely to contain the area’s most prestigious retail locations,” it says.

A better strategy — and the one Wimmer embraces — is to search for creative retailers unlikely to locate in suburbia, retailers that can create an edgy buzz. “The nation’s most successful downtown retail districts have been able to provide this with unique stores, typically serving limited but prestigious niches — not found in suburban malls,” the report says.

The city’s current hotel boom offers further encouragement, Wimmer says. When a hotel comes in, others decide they want to be in the market, too. The same goes for retail, she says. If one or two cutting-edge stores make the leap, others will follow. She’s not mentioning names — Nordstrom “would be nice,” she said with a chuckle — but she is discussing new formats like the “manutailoring” (manufacturer to showroom, no middle man) offered by H.D. Buttercup, the upscale Los Angeles furniture mart, among others.

The bottom line is that downtown Minneapolis will not reclaim its former regional retail status. But it can regain its full potential as an eclectic and innovative shopping destination for downtown visitors, workers and residents. A central challenge will be to convince two generations that have never thought of downtown as a retail option. A bigger challenge is to transform its inward, 1970s-era design into a more attractive, welcoming experience. Downtown retains its status as the region’s premier office district. It has undergone a stunning renewal of its cultural infrastructure. And, despite the current lull, it has added impressively to its residential population. Now, its task is to go shopping for more shopping.