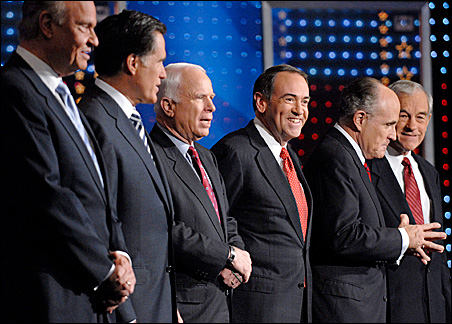 OK, Iowa and New Hampshire have had their say. What more do we know about who’s likely to be the next president as the next wave of primaries approaches?

· We know that voters seem more excited about the Democrats than the Republicans, who have drawn smaller crowds and turnouts, at least so far.

· We know more clearly the differences that separate the voters who prefer HillaryRodham Clinton (traditional Democrats) from those attracted to Barack Obama (younger, more affluent Democrats and independents).

· We suspect that public opinion polls may overestimate Obama’s support, perhaps because of race.

· We know that Republicans have a fascinating flock of candidates, none of whom fits perfectly into the mold that GOP primary voters seem to like.

· And we know that the worsening economy has replaced Iraq as the issue that voters care about most.

Let’s take the last point first. Asked about what they would do to soften a recession, Republican candidates at Thursday night’s debate in Myrtle Beach, S.C., answered almost in unison: tax cuts. Making permanent President Bush’s tax cuts of 2001 and 2003 — which Democrats oppose — was first on their list, although some also listed additional tax incentives for business. The tax-cutting legacy of Ronald Reagan was evoked repeatedly, with Fred Thompson, the former Tennessee senator, taking specific aim at Mike Huckabee, the former Arkansas governor whose religious and populist credentials make him a favorite to win in South Carolina on Jan. 26.

Battle for GOP’s heart and soul
“This is a battle for the heart and soul of the Republican Party and its future,” Thompson asserted. “On the one hand, you have the Reagan revolution, the Reagan coalition of limited government and stronger national security. On the other hand, you have the direction that Gov. Huckabee would take us in. He would be a Christian leader, but he would also bring about liberal economic policies, liberal foreign policies [in] the tradition of ‘blame America first.’ “

Indeed, David Brooks, in today’s New York Times, foretells an end to the simplicity of the tax cut answer to every economic question. “Smart Republicans are groping for a new economic model (to replace the supply-side emphasis) and, as they do, Republican economic policies are shifting,” he wrote. “The entrepreneur is no longer king. The wage-earner is king. As the presidential campaign rolls into Michigan, it’s clear that Republicans are adjusting their priorities to win back the anxious middle class.”

Democrats, meanwhile, have had wage-earners in their sites all along, as noted in today’s Washington Post roundup.

As the liklihood of a recession grows, most economists interviewed in in today’s Wall Street Journal expect a Democrat to be elected next fall. Of those economists, “some 56 percent disapprove of President Bush’s handling of the economy,” the story said, “about the same as the 59 percent of the public who disapproved in a recent Wall Street Journal/NBC poll.”

Public interest favoring Democrats
It should surprise no one, then, that the public seemed noticeably more interested in the Democratic field during the season’s first two political events. In Iowa, the Democratic caucuses drew nearly twice as many people as the Republican meetings. In New Hampshire, Democratic candidates outpolled Republicans by 3-2.

“It was women and voters of modest means who pulled Clinton back from the abyss,” he wrote. “And the people Edwards courts were the ones Clinton connected with [in New Hampshire]. She defeated Obama soundly among voters in families earning less than $50,000 a year and among those who never attended college.”

“She stole the mantle of empathy from [John] Edwards,” Dionne continued. “Voters who told exit pollsters that they made their choice of the basis of which candidate ‘cares about people like me’ went strongly for Edwards in Iowa [but in New Hampshire] Clinton narrowly defeated Edwards in this group — and overwhelmed Obama, 2-1.”

Veteran polltaker Andy Kohut supplied an additional explanation for the surprise of Clinton’s win. Lower-income voters are less apt to answer poll questions, he wrote in the Times. And when they do, they tend to say that they favor a black candidate when, in fact, they do not. The glitch was first noted in 1990 when Charlotte’s African-American mayor, Harvey Gantt, seemed on the verge of defeating then-Sen. Jesse Helms (R-N.C.), only to lose by a substantial margin.

As for delineation on the Republican side, none of the top three Republicans fit neatly into the box than many GOP primary voters prefer. Sen. John McCain, who may be the front-runner after his New Hampshire victory, has an independent streak and, along with Huckabee, lacks hard-line views on immigration. Huckabee, the populist in the group, once raised taxes, a mortal sin according to some. And Mitt Romney, the former Massacusetts governor, has remodeled his moderate social views to fit the conservative primary crowd. Last night’s debate on Fox offers a good glimpse of the field.