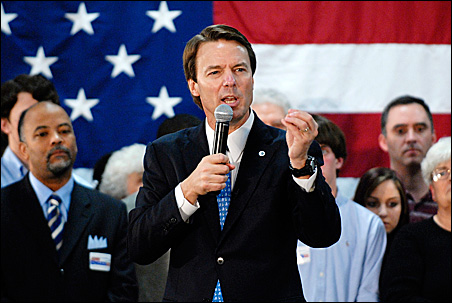 By all accounts, John Edwards’ campaign stop in St. Paul Tuesday night was marked by an upbeat energy. An overflow crowd of about 1,000 packed the Carpenters Union Hall in St. Paul. Just a day earlier, the Team Edwards was claiming their man was in for the long haul. And after his stump, the candidate headed into the crowd to touch or shake every Minnesota hand that he could reach.

“In hindsight, it was his last speech on the campaign trail,” says state Rep Tony Sertich, who introduced Edwards before that speech. “It had to be a helluva way to go out.”

In fact, if Edwards knew he was going to bail on his candidacy, he gave no hint, and his supporters detected nothing of the sort.

“We certainly thought he would last through Tuesday or maybe even longer,” says Ted Mondale, a co-chair of the Edwards gambit in Minnesota. “There was a feeling in the room that this guy could come back.”

Of course, that went poof early Wednesday morning, when reports leaked that Edwards was pulling out, something he confirmed around 12:30 p.m. by announcing he was “suspending” his campaign. Edwards also stuck with his stump message about ending poverty and uniting his “Two Americas” into one. (One can hope that none of us hear the resounding thump of the cleft palate story again, however.)

Both the semantics and the message are notable: It implies that Edwards is not telling his supporters to throw delegates necessarily to Hillary Rodham Clinton or Barack Obama — indeed, he notably offered no endorsement — and leaves the nominating process just as muddled.

Initially, it looked as though Edwards may have been skimming from Obama, due to the perception that they were sharing largely the same message — and splitting the “anybody but Hillary” camp. But in recent weeks, especially after South Carolina, it became clear that Edwards was taking a good number of votes — particularly those of whites and some working class — from Clinton. The question now is: Where will the Edwards people go?


Boon for Obama?
Sertich, for one, is making no proclamations. “The Edwards people aren’t going to stay home,” he says. “Those people will caucus in Minnesota.” But for whom? “Too early to tell.”

Mondale, on the other hand, pulls no punches. “It’s a boost to Obama,” he says. “I don’t want to speak for them, but it’s my perception that most of Edwards’ people will move to Obama because they want a more progressive change and less of an established candidate.”

Mondale also points to the Edwards populist bona fides, which have always played well in Minnesota. “It’s a big deal that he didn’t take PAC money, and people here talk about change in Washington,” Mondale says. “And they see Obama like that.”

Though Mondale notes that the local Edwards campaign had little money, and therefore no hard data on where Edwards had support in Minnesota, conventional wisdom says the Iron Range and beyond likely feature pockets of Edwards support. Mondale notes that outstate politicos like state Rep Tom Rukavina had thrown support to Edwards, as did the Service Employees International Union and the steelworker and carpenters unions. It should be noted, however, that Clinton has the backing of the local AFSCME council.

“I could be wrong, and I’m certainly not a genius,” Mondale says, “but I think 70 percent of those people will go to Obama.”


Same story in the cities
Minneapolis City Council member Ralph Remington, who has been campaigning for Obama in Iowa and at home, has similar feelings about city folk who like Edwards.

“I think it means more than 90 percent of Edwards supporters are more likely to be Obama voters.” Of course, Remington is an Obama man, and he admits that his view is based on “anecdotal” evidence — like the notion that he “personally knows some Edwards people who have said they wouldn’t vote for Hillary in a million years.” Remington also points to numerous polls that cite Obama as the second choice for both Clinton and Edwards supporters.

Mondale echoes this sentiment: “I think Obama blows it out in the Fifth District on Tuesday.”

Either way, Mondale and no doubt many Edwards supporters were harboring a strong disappointment on Wednesday, especially after receiving word from national last week that the campaign was kicking into high gear. “Last night, we were with Rukavina at Mancini’s, plotting how we were going to keep this campaign going,” Mondale says. “They made us introduce him as the next president of the United States!”

Mondale, who notes that 90 percent of all campaigns end up as losers (and he should know), thinks that Edwards “just came to a conclusion that he just couldn’t do it, that the numbers just didn’t add up.

“But we even raised money last night,” he concludes. “Luckily, I didn’t cash the checks yet.”

Edwards’ Minnesota supporters are stunned: Where do they go from here?