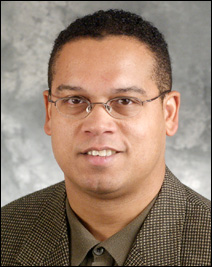 The physical conditions at the military detention center at Guantanamo Bay, Cuba, are humane, but that should not undo all Americans’ concerns about what is going on there, U.S. Rep. Keith Ellison said today.

“If you have an image in your mind of people hung up by thumbscrews, I didn’t see that,” said Ellison, D-Minn., who returned Thursday evening from a one-day congressional trip to the detention center. “What I did see is a whole lot of people who have no (legal) process to change that condition that they’re in. No process.”

Ellison, who represents the state’s 5th congressional district, described his visit during a speech to students, faculty and others at the University of Minnesota Law School in Minneapolis.

About 275 prisoners that the government believes have ties to terrorists are being held at Guantanamo Bay.

Detention facilities, he said, appear similar to a typical U.S. prison, and conditions have “been approaching what you and I regard as a more humane manner of detention,” with access to medical care, 5,000 calories a day of food and up to 12 hours of recreation.

“Camp X-Ray,” the stark area that looked like a “dog kennel” and was featured in early news images from the center, is no longer used, he said.

“But nothing that I just said makes it all OK,” when some detainees have no history of violent acts and have no way of challenging their detention as a typical inmate would under the U.S. Constitution, Ellison said.

The cost of the war affects the economy, Ellison said, contending that current drops in consumer spending can be attributed in part to higher energy and fuel costs that in turn may be attributed to the war. “This war is driving our economic problems,” Ellison said.

Ellison spoke at an event sponsored by the MLK (Martin Luther King) Raise the Bar student organization, which coordinates some service work by law students at Twin Cities nonprofit organizations.

Jack Sullivan is a former reporter for the Pioneer Press and the Associated Press.