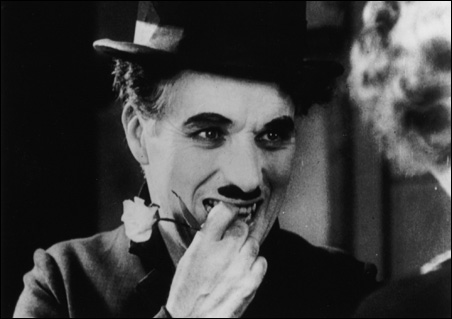 Among ploys to lure movie-lovers away from their high-def monitors and Netflix envelopes, the verily whoa-inducing “U23D”— opening Jan. 23 at the Minnesota Zoo’s IMAX Theatre — seems among the shrewdest, particularly when cranked to the proverbial 11.

Yet modern times arguably have nothing on “City Lights,” the 77-year-old 2D Charlie Chaplin gem with which the Minnesota Orchestra is kicking off its “Sounds of Cinema Festival.”

Widely considered to be the last great silent movie, “City Lights”— set and shot near the start of the Great Depression — is both historical and utterly au courant. Anyone who has seen Michael Moore’s “Sicko” or suffered some of the pain it documents will relate to Chaplin’s lovestruck Little Tramp, who stops at nothing to secure eye surgery for his literally blind date (played by Virginia Cherrill).

As if to acknowledge the classic film’s currency at a time when Minnesota’s unemployment rates continue to climb, the orchestra will be doling out freebies early on the morning of Jan. 17, the festival’s opening day. Call it the 21st-century equivalent of a soup line: “The Sounds of Cinema Breakfast” offers a free pastry and cup of coffee, a newspaper and a video-rental gift card to the first 500 people (or “commuters,” per the press release) who visit the Orchestra Hall driveway after 5 a.m.

Studying Chaplin’s 455-page score
Actors dressed as Rhett and Scarlett and other famous movie characters will be up early to bestow the gifts. But the true star of the show is music director and conductor Osmo Vänskä, who has been studying the 455-page “City Lights” score — written by Chaplin himself — in preparation for two screenings to live accompaniment by the orchestra. (You can sample the film and music by going here.)

“I still have a lot of work to do,” says Vänskä by phone a week before the first show (at 11 a.m. on the 17th). “There are many things to mark on every page. A Mahler symphony could be 200 pages. This score is more than double that! Chaplin was very detailed in his instructions. We have to be synchronized with the movie.”

Indeed, Chaplin designed the film for split-second synchronization. In 1931, New York Times critic Mordaunt Hall observed, “There are times when the [musical] notes serve almost for words and so far as sound effects go, Chaplin won gales of laughter [at the screening] last night when the Tramp swallows a whistle and every time he breathes he whistles.”

After I read this comment to Vänskä, who will be eliciting “whistles” from his band members, he gushes, “Chaplin really was a genius. He was able to take all those elements — as actor, director, and musician — and put them all together seamlessly.”

Vänskä will also be conducting a “Sounds of Cinema” devoted to “golden era” scores by Elmer Bernstein (“The Magnificent Seven”), Max Steiner (“Gone with the Wind”), and Bernard Herrmann (“Vertigo,” not to be confused with U2’s tune of the same name). On the evening of Jan. 26, Vänskä’s colleague Esa Heikkilä will conduct the orchestra’s rendition of Shostakovich’s “Battleship Potemkin” score while Sergei Eisenstein’s 1926 film inevitably hits the audience like a baby carriage crashing to the bottom of the Odessa Steps.

In the digital age, when watching movies on a video iPod is considered acceptable if not super-cool, “Sounds of Cinema” reasserts the primacy of film projection on a big screen in an auditorium full of strangers.

Vänskä says it’s also important to remind the modern audience of how significantly an orchestra is involved in any movie wherein symphony music plays a part.

“When people watch movies, they sometimes don’t recognize the importance of music,” he says. “Music is there to make the story work better, to bring the pictures more vividly to life, but sometimes it’s not seen as important.”

“City Lights” has been beloved to many for decades. In 1952, it placed second in the “Sight and Sound” poll of international critics; in 1998, it appeared on the American Film Institute’s list of the 100 greatest movies made in the United States. Kindred slapstick artist Jackie Chan put Chaplin’s movie near the top of his 10-best list — in between “The General” and “Rocky.”

And what does “City Lights” mean to Vänskä? Does he see Chaplin’s film not as a comedy but a movie about love?

“Of course, it is a movie about love,” he says. “There are millions of movies about love —it’s a very good subject. But this movie is special.”