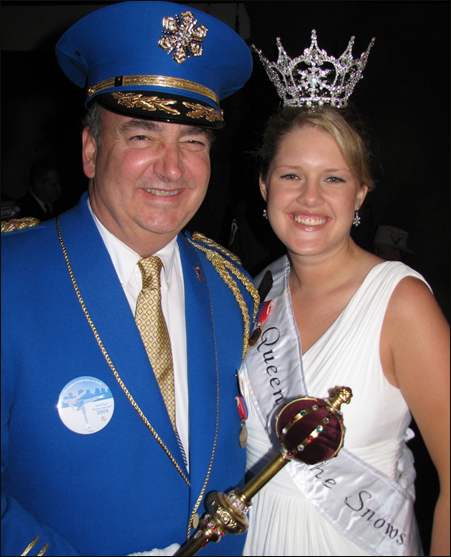 One of the well-kept secrets leading up to each year’s St. Paul Winter Carnival is the identity of the new King Boreas.

The head of the royal family — and it’s always a man (so far, always a white man) and usually a well-off business owner or highly placed executive who has flexibility in work schedules — is chosen well in advance of the late January festival by a cabal of former kings.

These king-makers must make the selection months ahead of time, to give the king-elect time to be fitted with a uniform, hat and other kingly garb. The new king also must secretly clear his schedule for the Carnival days, as well as make plans with his family to be on the road many weekends during the coming year, because the royal court travels to other festivals around Minnesota and, often, around the country.

New king’s identity well guarded
Only a select few are in on the identity, in order to build the drama and excitement on coronation night, when the king is introduced to a crowd of hundreds of Carnival insiders and the general public. The Queen of Snows is also selected that night from a field of women who have been interviewed and rated in advance.

In many recent years, I’d been privy to the king’s identity several days in advance. Swearing to keep the secret, I interviewed the man who would be king, so that I could prepare a story in advance for the Star Tribune. It couldn’t go online until late that night, in order to maintain the surprise. (I’d write it in advance and get photos, too, because it would be too difficult to do much of an interview in the few minutes remaining before deadline during the hubbub at coronation.)

Of course, this year I’m not at the paper, so I didn’t do an advance interview. And, of course, as luck would have it, this year the new king is someone I’ve known for years, and he didn’t dare clue me in.

Bill Foussard, 54, is this year’s king. He owns the White Bear Country Inn and Rudy’s Red-Eye Grill in White Bear Lake. Since his high school days at then Cretin High School, the St. Paul resident has run a Thanksgiving Day meal service for the needy and shut-ins.

This year’s Queen of the Snows is Brooke Stoeckel, 26, of Edina, who works at the Visit Minneapolis North Convention Bureau.

I was quite pleased, but surprised, to learn of Foussard’s induction. I’d seen him just over three weeks ago, when my wife and I ate dinner at Rudy’s on New Year’s Eve. Foussard sat with us on and off during the evening, as he paused occasionally during his rounds of the restaurant. He didn’t say a word about being king.

“Big secret. Couldn’t say a word,” he told me Friday, just hours after his coronation.

Foussard’s family has long royal history
His appointment continues a Carnival tradition of family involvement, for the Foussards and many other longtime Carnival families. Bill’s dad, Henri, was King Boreas in 1963; his godfather was king in 1954, and an uncle was prime minister in the 1950s.

“This is a once-in-a-lifetime thing,” Foussard said. “It’s an honor to be asked.”

Still, he said, he needed some time to think about it, when asked four months ago. “It’s a huge time commitment, and I wanted to be sure I’d have enough time to really do it right,” he said.

There’s a high monetary cost, too. The king provides his own uniforms and foots the bill for much of the travel.

But Foussard said it’s worth the effort because he loves St. Paul and believes the Winter Carnival is an important civic event.

The participants — the king, queen, princes and princesses, guards and Vulcans — often develop strong friendships that last long beyond their year in the limelight, he said.

There are business advantages, too. Other kings have said that the social and business networking conducted during the reign often translates into new clients or avenues of commerce.

“People like to do business with people they know and have come to trust,” Foussard said.