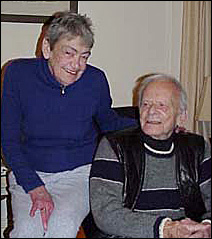 Gerry Neubeck died Monday night. With him, a piece of unique Olympic and Minnesota history fades away.

I met Gerry in 1996, before the Atlanta Summer Olympics. He was already a world-renowned University of Minnesota psychologist and scholar on human sexuality. But his sports past was a well-kept secret. In his closet. In his St. Paul home.

Around the time of the Atlanta Games, there was much news about how Germany was seeking reconciliation with Jewish athletes who had been barred from competing in the 1936 Berlin Games, the so-called “Nazi Olympics.” One track star, Gretel Bergmann, was at the center of attention. As a high jumper, she’d qualified to compete for Germany in ’36. But, because she was Jewish, she was barred from participating.  Later, among the lucky Jews, she fled to the United States.

“Gretel Bergmann, I was with her,” Gerry Neubeck told me then.

He pulled out photo albums. He showed me a running shirt with the letters “JSG” for Judische Sport Gemeinshaft, or Jewish Sports Association. He handed me his brown running shoes.

Gerhard Neubeck, then a teenager, was a candidate for that 1936 German team, too. Adolf Hitler, under pressure from some U.S. sports officials, conducted a Jewish-only Olympic training camp. Neubeck was a regional champ in the 1,500- and 3,000-meters.

Jewish Olympic training center a charade
Neubeck wouldn’t admit it, but the training center was a charade. No Jew made the German team, of course. But the training camp offered U.S. Olympic Committee officials some cover to participate in the ’36 Games, which were staged as a glorification of the Nazi system. Jesse Owens embarrassed Hitler, but those Berlin Olympics still stand as a monument to the political power of sports.

By 1938, Neubeck’s family escaped from Germany.

Soon, the U.S. Holocaust Museum in Washington, D.C., contacts him. They wanted the shirt and shoes to display.

Flash forward some more, to spring 2006. The Minnesota History Center presented an exhibit on the Nazi Olympics. I invited Gerry to tour the exhibit, the pictures and sounds of those Games, with me. He now was in a wheelchair, 88 years old.

He stared at a photo of thousands of Nazis, all in neat rows, watching the 1936 Olympic torch run, the first modern torch run. Hitler stood proudly by.

“Shivers run down my spine if I see this,” Neubeck told me. “I don’t have many nightmares about the Nazis, but any time I see pictures of Hitler, I shudder.”

Later, he wondered if young people in America still care or even know of the concentration camps, the genocide. If they know how sporting events can sometimes be used as a vehicle for the most vile of propaganda.

“It’s very alien to them,” he said of the history and its relevance to some. “This is a part of history that doesn’t concern them.”

Gerry Neubeck, 89 at his death, was a man whose singular slice of history will stay with me. Our state’s link to an unforgettable piece of Olympic history is gone.

Gerhard Neubeck, Minnesota’s link to the ‘Nazi Olympics,’ dies at 89