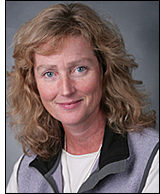 Courtesy of the University of Minnesota
Prof. Deborah Swackhamer

A pressing moral question for these times came from the audience last week at a “Headliners” event, where experts meet monthly with the community on the University of Minnesota’s St. Paul Campus.

Professor Deborah Swackhamer, featured expert for January, had been talking about some disturbing changes Minnesota could expect if greenhouse gas emissions aren’t curbed and global warming continues apace. Swackhamer is interim director of the University’s new Institute on the Environment.

As is true in most discussions of climate change, the talk called for crossing a certain time warp: We can’t yet see the full effect of the impending change. We also can’t see real benefits from steps we take to mitigate the problem. Both the dangers and the rewards belong to a future generation.

“We can’t afford to wait,” Swackhamer said. “We must make these changes now for our children to see an impact.”

Then came the question from the back of the room.

Tough question. It calls to mind the federal deficit, delayed repair of roads and bridges, depletion of everything from fossil fuels to wild tuna.

We know the political rhetoric. But do we know how to collectively control our appetites and leave something for the future?

Actually, Swackhamer said there is precedent.

More complicated problem
During the 1980s, alarms sounded over ozone depletion. Chemicals used for solvents, refrigerants and many other applications were damaging the planet’s ozone layer. Because the layer shields life on Earth from the sun’s harmful radiation, dire consequences were predicted.

The chemicals, called chlorofluorocarbons (CFCs), had been considered miracle creations, and companies had invested large sums in their use. But after much debate and finger pointing, industrialized nations began phasing them out in the 1990s.

By comparison, global warming is a far more complicated problem in that greenhouse gases are “emitted from so many quarters,” Swackhamer said. Curbing them calls for sacrifice by everyone.

Note: If you’re reading this during the first cold snap of 2008, you’ll have to let your imagination take you back to a 90-plus degree day last summer; the state is due for many more of them under Swackhamer’s warming scenario.

Swackhamer’s bottom-line summation is that Minnesota would become like Kansas.

“Am I cheering you up yet?” she asked the audience of about 200 people.

Profound change
No one laughed when Swackhamer described the implications. The state’s famed lakes would host more algae, and some fish species would be threatened.

One profound change, she said, would be a shift in Minnesota’s forests. The deciduous forests — maples, oaks and elms that grace the Twin Cities area — gradually would move north, leaving prairie grasslands to fill in behind. The stately conifers — spruce, fir, tamarack and some pines that define northern Minnesota’s beauty — would disappear into Canada.

Expert opinion varies on whether Minnesota would see more or less precipitation in a warmer future. And the precipitation question plays into shifts of forest lines. But there is plenty of expert support for the scenario Swackhamer outlined.

Most of us know, by now, steps people could take to deflect that future. Swackhamer’s list included: less driving, teleconferencing rather than flying to business meetings, switching to energy-efficient light bulbs, recycling, planting trees, turning heat down, urging elected officials to take the threat seriously and launch large-scale corrective efforts.

Many families already are well into the recycling and light bulb transition and some are buying energy-efficient vehicles. But we shouldn’t fool ourselves about the scale of the change that is needed, Swackhamer said.

“You can’t just change light bulbs and say, ‘There, I’ve modified my behavior and fixed the problem,'” she said.

Which brings us back to the question: Is there any precedent for people making large-scale behavioral change when they don’t see the bullet coming at them?