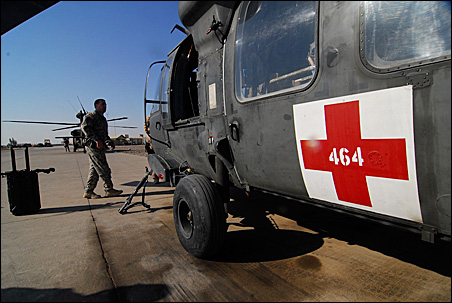 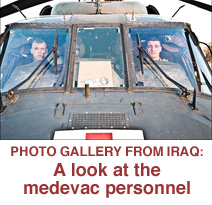 But of all the groups and units at Balad, maybe the coolest is what the Army calls the C/7-101st Aviation Regiment, and everybody else calls the “medevac guys.” The medevac guys pretty much know that they’re the coolest, and other pilots, who are pretty cool themselves, will sometimes secretly admit that Charlie Company is pretty f—-ing cool.

So cool that a couple of the pilots, who’d retired, re-enlisted on the condition that they fly with the medevac unit.

Cool like this: A couple of guys are out in the street throwing a football around, and company commander Capt. Michael Pouncey is loitering on the porch in front of the operations center, watching the football and chatting with his pilots and medics. He points at one of the guys and says, “He played wide receiver at Oregon State.” Other guys are hanging out in the coffee shop, or watching TV in a plywood lounge, or just hanging around.

During this quiet time, a group of people gather in a plywood “coffee shop” to chat, and Pouncey mentions, in passing, that there was an IED — improvised explosive device — at the back of the room. A bomb disposal unit, he said, had had a man injured, and Charlie had flown him into the hospital. As a way of thanking the company, the bomb guys had sent them a disarmed IED as a trophy. 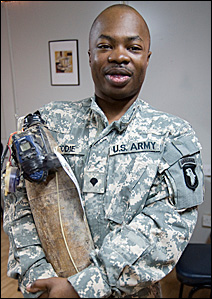 Spc. 4 Alvin Boddie, a flight medic, is harassed into posing with it. “This thing is heavy,” he said. “I didn’t know they were this heavy.”

For all the casual talk and hanging-out, nobody goes too far from the operations center. They’re waiting, waiting…

A call and everyone’s running
Then a call come in, a plea for help, and a subset of the guys get a burp on the radios hanging from their pockets: “medevac medevac medevac” and everybody, it seems, starts running. One guy bursts out of the coffee shop and dashes toward the operations center, others grab gear and sprint toward the Blackhawk helicopters sitting on the flight line.

While other units will take several hours to brief and plan a mission, Charlie Company wants wheels-up — the chopper off the ground — in what Chief Warrant Officer 2 Mike Grieco calls, “the single-digits of minutes.” Essentially, Charlie is always briefed on the hostile threat situation, always knows the weather, is always loaded, is always ready to go.

On most days, the unit takes several calls — sometimes, many calls.

On Monday, a call comes in at 1605 (4:05 in the afternoon) for an injury of some kind — at this point, almost nothing is known, except that the injury is serious — at FOB Warhorse. FOB means forward operating base (called “fobs,” to rhyme with “jobs”) and they are the pointy end of the military ground war in Iraq. So everybody starts running: The pilots run into the operations center to get the details of injured man’s location. Crew chiefs and medics run toward the Blackhawks; the run can be up to 300 yards or so, depending on how the aircraft are parked.

At 1613 or 1614, everybody is strapped in and the first chopper jumps off the ground, and then the second one, and they crank out over the airbase and over the wire, over a village and farm fields, past the fat green snake of the Tigris River, and low, so the individual clods of dirt are visible in the farm fields, and the hand-sized splotches on the black-and-white cows, and the face of the cowherd looking up; at one place, under a plume of smoke, fire snakes through the underbrush of a palm plantation; in another, a bunch of kids are playing soccer on a dirt field and pause to look up as the two Blackhawks sweep by.

Earlier, Capt. Pouncey, Capt. Nathan Forrester, Boddie, the medic, Chief Warrant Officer 4 John Patterson, and others, took the time to explain how the equipment and the system works. All of the men are permanently stationed at Fort Campbell, Ky., when not on rotation into Iraq.

The Blackhawks, technically UH-60s, are specifically set up to carry the wounded. Instead of normal seats, they have, installed across the midsection, a “carousel,” which is a turntable device like a lazy susan.

Two litters are stacked vertically on each side of a central pivot post. The wounded are loaded straight in from the side of the Blackhawk. If there’s only one man, he remains that way, lying across the midsection of the helicopter. If there are more, they are stacked, and then the carousel is pivoted from an across-the-aircraft configuration, to a position where the litters are parallel with the centerline. That allows the medic to move around both sides of the carousel, and take care of all the patients at once. Four injured people will fit on individual litters on the carousel, and if necessary, two more can be put on the floor under the carousel.

The medic does not do sophisticated medicine: His main job, Boddie said, is to control the bleeding and keep the airways clear. He has oxygen and suction equipment available, as well as a medical kit.

The Golden Hour
But, as Patterson explains, the unit’s main asset is speed.

“Doctors talk about the Golden Hour,” Patterson said. “If you can get a badly injured patient into a trauma center inside an hour, then the chances of a good recovery increase astronomically.”

Because of the inherent problems of operating in a war zone, the military can’t always make the hour — though they frequently do. When a man is badly injured, his unit is required to call for help within 10 minutes and to supply within that time a “9-line,” which is essentially a block of information (like location) that will allow the medevac unit to get to the patient as quickly as possible.

At the highest level, “urgent” missions, the standard is to get the injured person to the hospital within two hours. Urgent calls are those in which there is a danger to the victim’s life, limb or eyesight. At the next level down, there is a priority call. There, the standard is no more than four hours from injury to hospital. 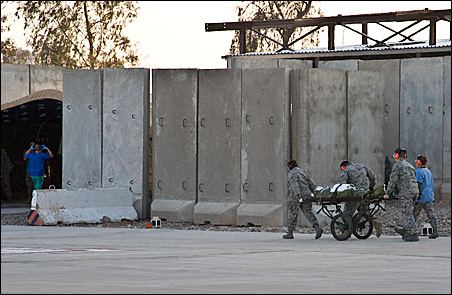 MinnPost photo by John Camp
Workers hustle an injured man on a gurney from the emergency-room landing-pad to the hospital.

“It didn’t make any difference, because we got there right away, but sometimes the judgment of the unit on the ground can be a little off,” he said. For that reason, if it’s not necessary to prioritize flights — if aircraft are immediately available — they move fast even on lower-level calls for help.

In addition to emergency missions, the medevac teams move injured patients from smaller, outlying hospitals to Balad for further transfer to hospitals in Germany or the United States, and they may transfer urgent supplies like blood to forward hospitals. (At the time of the mission Monday afternoon, three cases of whole blood, packed in dry ice, are sitting in the operations center, awaiting movement.)

When a mission goes out, Forrester said, the people back at the operations center keep up a continuing flow of information to the flying aircraft, particularly anything available about ground conditions — the enemy threat, and anything else that the pilots need to know. The pilots are also updated on any weather changes and any other flight operations in the area. As far as types of injuries, he said, “You name it, we’ve seen it.”

Land and quickly back in the air
Flying on this mission are CW4 John Patterson, pilot in command of the lead aircraft; Capt. John McGuire, pilot; crew chief Anthony Mendoza and flight medic Staff Sgt. Christopher Blessett in the lead aircraft. The trailing aircraft is flown by CW2 Mike Grieco and Capt. Jason Yellman, with Sgt. Steve Simpson as crew chief and Boddie.

On this mission, the Blackhawks come into an area with scattered houses, and then a loose village, and then they almost lay on their sides as they turn and drop quickly into a landing area at FOB Warhorse.

Every mission has at least two Blackhawks — that way, if one of them should have a mechanical problem, or get knocked down by hostile fire, the other can provide cover until recovery teams arrive. In this case, the lead Blackhawk dropped into the landing zone, with the trailing aircraft right beside it.

Men from Warhorse run the victim out to the leading aircraft, and a minute later, the choppers are back in the air, cranking for the trauma center back at Balad. Everything moves in straight lines, except the maneuvering at the landing zone. The Blackhawks are back across the village, over a shepherd with his sheep organized in a triangular flock, over the cows, and the palm plantations, the river, the wire, and onto the landing pad at the hospital. There, the emergency-room landing-pad team is waiting with a gurney, and they hustle out to get the injured man. 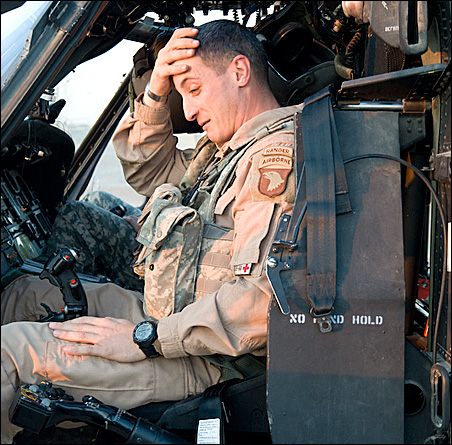 The man rides on a gurney under a canopy with a big U.S. flag overhead, into the emergency room, where he is swarmed by medical personnel. In minutes, they have his clothes off, an oxygen mask on his face; word comes back that the victim is suffering a laceration of the skull.

Cause of the injury is unknown, but that’s not really Charlie Company’s primary interest, anyway.

Their interest was to get the man alive to the hospital, as fast as possible, and they’d done that.

That’s all a fairly large rush for the people involved. Then, like most things military, comes the routine aftermath. The Blackhawks immediately go to a refueling station to top off the tanks — they never know when they’ll have to fly, and Patterson says that he has had calls to fly to a new urgent pickup while still getting fuel.

After fueling, it’s a short hop back to the home base.

Everybody climbs out, the rotors cycle down, the crew chiefs begin an inspection of the machines, getting ready for the next launch.

Time from call to shutdown, 52 minutes.

Which is pretty cool.