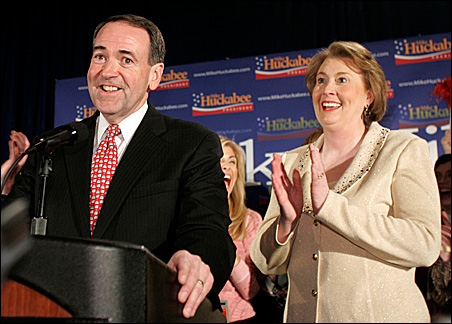 Last night, Fox News political commentator Bill O’Reilly began his special Iowa caucus broadcast by assessing the value of the political exercise in question. Does it matter? Not much, according to the No-Spin Zone. O’Reilly intimated to you, the viewer, that the only reason the media cover the caucuses is to lure in the brainless masses. That would be you, the viewer. Even by the standards to which any reasonable person would hold O’Reilly, this was a remarkable display of cynicism.

But O’Reilly’s blanket dismissal was not an anomaly. Earlier in the day, an Op-Ed piece by Gail Collins in the New York Times warned readers not to pay any attention to what happens in Iowa. The Strib’s own Katherine Kersten made a similar point.

This year, despite media spin going in, might be different.

Perhaps the main story to come out of Iowa last night was the record turnout, especially on the Democratic side — shattering the previous caucus record of 125,000 by some 100,000 ballots. And Republicans came out in record numbers, to the tune of 115,000, which means that the small sliver just got a little bigger, and that could hint at a national phenomenon — more people getting out to vote.

If that’s the case, last night’s results could very well be an indication of the larger campaign, since the winners, Barack Obama and Mike Huckabee, succeeded by drawing in first-timers. It is true that Iowa caucus winners rarely go on to win the presidency, but many top finishers have gone on to win their party’s nomination. In elections without a sitting president or vice president, like this year, the Iowa winner has gone on to the nomination only about half the time.

Obama, Huckabee prove to be media naturals
“First of all, we tend to use superlatives in politics, but it was an extraordinary night for Iowa,” said Mike Mahaffey, a former chair of the state’s Republican Party, the morning after. “On a cold Iowa night, close to 350,000 people came out.”

And Huckabee and Obama — media naturals, both — used their moments in the sun exceedingly well. 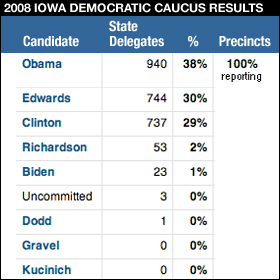 Mahaffey says Huckabee’s victory galvanizes the Republican race for the first time. “Before last night, there wasn’t a front-runner,” Mahaffey said. “Now, Mike Huckabee is a front-runner.” The big question is whether Huckabee, with no money, can maintain momentum. In the short term, Mahaffey said, he gets a huge media boost, which is “free money, free publicity.” Whether that turns into actual money remains to be seen: “The first-timers that are coming out for Huckabee … are they going to give him money? We don’t know.”

Mahaffey said that while other Republican candidates might win in other states — McCain in New Hampshire, Giuliani in Florida, say — Huckabee’s decisive win was, well, decisive.

On the Democratic side, it’s hard to believe there is an American out there who could see Barack Obama’s victory speech and not be moved to some degree. “His speech last night was marvelous,” said Mahaffey, swooning across party lines. “He hit the right tone, the right cadence, he has that beck and call of a preacher. I think that brings him way up. I think that he wins New Hampshire.”

Pundits aside, it remains to be seen what impact Iowa has. The media elite ate up valuable airwaves and white space pondering one question: Does Iowa matter?

“Thousands of journalists have come here every four years and ask me to answer that question,” said Dennis Goldford, a political science professor at Drake University, and perhaps the nation’s leading Iowa caucus expert. “They apparently don’t get the irony.”

O’Reilly went on to say that the caucuses were attended by “activist voters” who don’t represent the general electorate or the feelings of Americans at large. And the headline of Collins’ mocking column was “The slice of the sliver speaks,” implying, like others did, that Iowa is a small, meaningless voter sample. 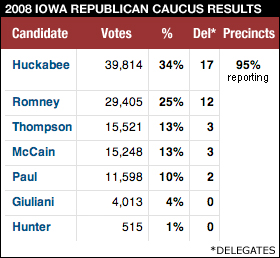 Buyer’s remorse?
But there is a feeling that the caucuses don’t mean what they used to. The main problem, in the era of the four-year presidential election cycle, is that the average voter is burnt out on campaigns earlier than ever. And there is caucus creep — the increasingly early date for the caucus and several primaries. That, in fact, has changed the dynamic in the Hawkeye State.

“It’s not the earlier start time by itself,” Goldford said. “It’s the punching up of all the primaries behind Iowa.”

Goldford and others believe the primary season needs to be stretched out to lead up to the respective party conventions to afford voters more time to properly vet candidates. As it is now, candidates are done if they stumble in Iowa, or some are exalted too early if they do well. And don’t underestimate the effect: A candidate can come out of nowhere, wow caucus-goers, and then the party is stuck with a leading candidate that may not be representative of the party as a whole.

“I think there was buyer’s remorse about Kerry in April,” Goldford said, referring to the Democratic caucus winner in 2004 who was basically anointed after Iowa. “There was a feeling of, ‘Oh god, what now?'”

“I don’t want to say they are irrelevant, because they’re not,” said Jon Ericson, a former provost at Drake who caucused for Democrats for 40 years. “But it has become a point where the early start gives you two candidates who don’t necessarily represent their parties.”

But if some success stories in Iowa can leave the broader electorate scratching their heads — why did Ron Paul track in Iowa but Chris Dodd didn’t? — top candidates get an amount of name recognition and publicity like never before.

“We sift through the candidates, and that’s our job,” said Dave Nagle, a former congressman and chairman for the state’s Democratic Party. “We don’t actually vote for the president.”

Goldford agreed, likening campaigns to building a car — in Iowa, candidates get to “give it a test drive.” “The caucuses are important for two reasons, and it’s almost purely by accident,” Goldford said. “The first is that it forces candidates to show voters unexpected strengths and weaknesses. And it forces candidates to talk to average citizens like real people. In political events, real people are usually just props.”

If pundits agreed on anything Thursday night, it was that Iowans resoundingly said they want change. If this appeals to the nation at large, and there’s no reason to think that it doesn’t, then Iowa may be important in 2008 for one reason, if no other: A shake-up of the status quo. For example, even talking heads on Fox were gushing over Obama, certainly a development nobody saw coming. It was, as MSNBC’s Chris Matthews summarized, going against the earlier tide of his media brethren, “Big turnout. Good for Obama, good for democracy.”

That feeling is shared by the die-hards who participated as well. “I have periods of feeling sorry for folks in states that have primaries,” said Jon Ericson before the big night. “Everything the Greeks taught us about the polis, we get to do for one evening. Democracy works because [it’s] fun.”