Mamas, don’t let your babies grow up to be Hillary.
Don’t let ’em say she is feminism’s way.
Make ’em be doctors and lawyers and such.
— With apologies to Willie and Waylon 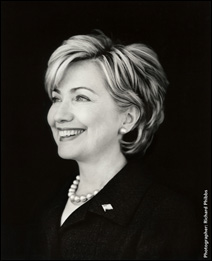 “Such” definitely includes running for president, but not Hillary Rodham Clinton’s way.

Because Hillary’s way is definitely not feminism’s way.

But for the fact that her husband was the governor of Arkansas, Hillary would never have been able to turn a $1,000 investment into $100,000 in 10 months by trading cattle futures.

But for the fact that her husband was governor, a year after he was elected, Hillary would never have been named the first female partner at the prestigious Rose Law Firm. (Her previous legal experience included several years as one of thousands of U.S. House staff attorneys and as a staff attorney for the Children’s Defense Fund.)

But for the fact that her husband was president, he would never have appointed Hillary to chair a national health care task force that emerged from secret negotiations with a spectacularly economically implausible plan for universal health care. “HillaryCare” was so disastrous it couldn’t even muster enough Democratic votes in the U.S. Senate to pass.

But for the fact that her husband was president, Hillary would never have been able to raise $30 million to buy a U.S. Senate seat in New York, where she had lived for only one year.

Every career move Hillary made since the 1970s when she left Washington for Arkansas to marry Bill, was because of the status of her man. She never busted her own move.

Feminism it ain’t
The antithesis of feminism is professional achievement entirely dependent on a husband.

As first-lady-elect in the early 1990s, Hillary infamously said on “60 Minutes”: “I am not sitting here as some little woman standing by my man, like Tammy Wynette. I’m sitting here because I love him and I respect him and I honor what he has been through and what we’ve been through together.” That interview was about Gennifer Flowers, a woman Bill ultimately admitted to having an affair with.

Eight years later, as first lady, Hillary did stand by her man when allegations were made that Bill had sexual relations with Monica Lewinsky. On “The Today Show,” Hillary also infamously said, “This is — the great story here for anybody willing to find it and write about it and explain it is this vast right-wing conspiracy that has been conspiring against my husband since the day he announced for president.” Bill, of course, did have sexual relations with Lewinsky.

If the conventional wisdom is that electing Hillary as president is the culmination of feminism, Mamas, tell your daughters to quit.

Just kidding. Quitting is also the antithesis of feminism.

Make your own kind of music. That’s feminism.

Hillary must not have owned the album.