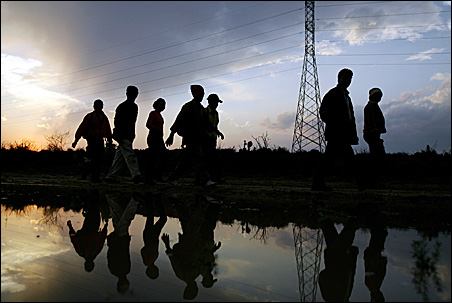 REUTERS/Carlos Barria
Immigrants arrive at the border city of Nuevo Laredo in 2006 after a nine-hour train trip from Monterrey, Mexico. Every day, trains in Mexico are used by immigrants heading for the border between Mexico and the United States.

While Mike Huckabee’s Iowa win undoubtedly came from a surge of evangelicals (60 percent of GOP caucus-goers, up from the typical 40 percent), cognitive dissonance can also be credited.

Republicans arrived at the caucuses ranking illegal immigration their number one issue, according to CNN’s entrance poll, yet they gave the victory to the former Arkansas governor, who faced a fusillade of negative ads about policies such as letting children of illegal immigrants participate in state scholarship programs.

Huckabee, who famously said that this nation is above denying children opportunities because of the actions of their parents, not only triumphed among Republicans who said immigration was their top issue, but he also racked up more support among this group (36 percent) than among the Iowa electorate at large (34 percent).

He also won among Republicans who cited other top issues (the economy, terrorism and the Iraq war), but his immigration plurality was the largest. And if you combine the Iowa totals of Huckabee, John McCain and Rudy Giuliani, immigration “wets” won a majority of Republican votes Thursday.

Illegal immigration is undoubtedly a potent ’08 issue, but has its potency been overrated? It’s easy to see why Republicans are attracted to border security; in a new National Public Radio poll cited by the Washington Post, immigration is the only major issue in which the electorate sides with the GOP. Then again, the margin is only 49 percent to 44 percent — not exactly a thick-enough wedge to blow open an election, especially when compared to double-digit margins for Democrats on economic and foreign policy issues. To be fair, the Republican co-sponsor of the poll, Public Opinion Strategies, noted that the Democratic position included barring “illegal immigrants from getting most government benefits,” a bit of toughness Democrats rarely bray about.

· Even if you think the issue is being exploited to stir up the masses, show you “get” that there’s an immigration problem.

· Attack President Bush for losing control of the problem. (Huck’s pseudonym is “the federal government.”)

· Tighten border and workplace enforcement. (The latter is a frequent Democratic talking point, usually focused on employers instead of worker roundups at Midwestern meatpacking plants that can snare legal immigrants and citizens.)

· Be positive about the hardworking, family-oriented nature of new immigrants, and promote a path to citizenship.

The Greenberg survey also teases out the fissures within the Democratic base: 42 percent of African Americans rank illegal immigration as their top issue, as do 33 percent of all party faithful. While the Greenberg survey found higher support for a Democratic message that emphasized workplace enforcement over one that included border security, it conducted a separate test that showed the pitfalls of that approach:

“Half of the respondents were read enforcement-only messages from the Democrats (as well as Republican statements); the other half were read Democratic statements all of which talked about some form of legalization and permanence for the 12 million illegal immigrants (along with the Republican messages). Among those who heard the enforcement-only messages, the Democratic advantage over Republicans on the immigration issue rose from 3 points to 9 points, as independents shifted toward the Democrats. Among those who heard the consistent legalization messages, the Democratic advantage became a 1-point deficit.”

Again, though, one takeaway is that despite immigration’s rep as a game-changer, the real gap may be so small as to be neutralized with a few savvy plays.

David Brauer, a former writer and editor for City Pages, can be reached at dbrauer [at] minnpost [dot] com.