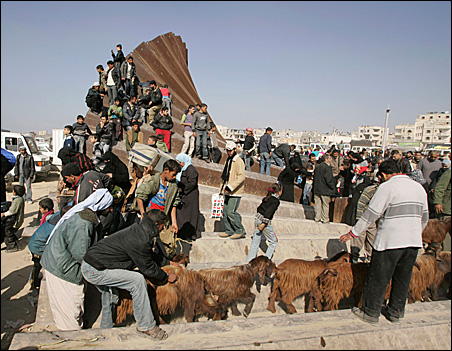 REUTERS/Mohammed Salem
People buy goats in Egypt after crossing the destroyed section of the border wall between the Gaza Strip and Egypt.

As the world watched Palestinians flow by the thousands from Gaza into Egypt on Wednesday, journalistic observers collectively saw a PR coup by Hamas, a failed strategy and worrisome ramifications for Israel, and new complications in Egypt-Israel relations.

Cairo-based Sally Buzbee of the Associated Press neatly laid out the background to Wednesday’s events: “Hamas has been launching a steady stream of rocket attacks from Gaza onto Israeli border towns. When those attacks spiked recently, Israel imposed an almost-total closure on Gaza, causing outrage across the Arab world about a looming Gaza humanitarian crisis.

“That put Egypt in a rough position. It has largely kept its border with Gaza closed since the Hamas takeover, fearing a spillover of Hamas-style militancy onto its own territory. But Egypt also faces enormous public pressure to help the Palestinians trapped in Gaza, short on electricity and other staples. Arab television stations have focused on nothing but the Gaza situation in recent days, creating a huge backlash against Israel all across the Arab world. ‘Egypt is confronted with what for them is a nasty dilemma’ — put in the position of being ‘co-jailer of Gaza Palestinians,’ said Mouin Rabbani, an analyst at the International Crisis Group think tank in Jordan.”

Bottled-up anger
Faced with that dynamic, Egyptian President Hosni Mubarak chose to allow a free flow of people after explosives created huge breaks in the wall in the town of Rafah. A Guardian Unlimited editorial noted not only Mubarak’s difficult position but a failed Israeli policy:

“If you bottle up 1.5 million people in a territory 25 miles long and six miles wide, and turn off the lights, as Israel has done in Gaza, the bottle will burst. This is what happened yesterday when tens of thousands of Gazans poured into Egypt to buy food, fuel and supplies after militants destroyed two-thirds of the wall separating the Gaza Strip from Egypt. It was the biggest jail break in history.

“But it was also a reply to the argument that the only way to stop Qassam rockets falling on the Israeli town of Sderot and the western Negev is to turn the screw still further. One side of the vessel has now shattered. So much for the strategy of trying to contain Gazans. Jordan and Egypt, two Arab states with formal peace treaties with Israel, are furious — not least the Egyptian president Hosni Mubarak, who is under pressure to sever ties with Israel.”

Furthermore, said an analysis in Tel Aviv’s Haaretz: “In destroying the wall separating the Palestinian and Egyptian sides of Rafah, Hamas chalked up a real coup. Not only did the organization demonstrate once again that it is a disciplined, determined entity, and an opponent that is exponentially more sophisticated than the Palestine Liberation Organization. It also took the sting out of the economic blockade plan devised by Israel’s military establishment, an idea whose effectiveness was doubtful from the beginning but whose potential for international damage was not.”

The theme of an Israeli policy gone wrong cropped up in many an analysis. Kevin Peraino wrote in Newsweek: “The Egyptian border debacle is just one more reminder that the law of unintended consequences tends to rule in the Middle East …. It is also an illustration of just how difficult it will be for George W. Bush to realize his hopes for a ‘West Bank First’ strategy that aims to turn Gazan public opinion against the Islamists — much less his goal of a comprehensive peace agreement. The Bush administration’s strategy since Hamas swept to power in local elections two years ago has been to squeeze the Islamists by depriving them of the aid money the Palestinian economy usually depends on to operate. For a while at least, the tactic seemed to be working, at least on a superficial level. … Yet over the last few weeks, increasing Israeli crackdowns in response to intensifying rocket fire from Gaza threaten to push Palestinian public opinion back in the other direction.”

‘Collective punishment’
The public’s opinion has indeed shifted, wrote Tim McGirk of Time: “Now that Gazans have exploded out of their besieged enclave, it may be up to Israel to seal up the border again, since the Egyptians are showing no signs of doing so. Israel had put the’collective punishment’ economic squeeze on Gaza’s 1.5 million people — a policy described as by many aid organizations — hoping it would turn the Palestinians against Hamas. But with the siege broken, even if temporarily, Hamas has earned the gratitude of hungry Palestinians and reinvigorated its popularity in Gaza.”

With Hamas a temporary winner, Egypt in a delicate position and Israel still determined to keep the pressure on Gaza to stop the rockets, a Haaretz editorial urged caution — while hurling a couple of sharp zingers toward Israeli leaders: “Contradictory announcements by the Israeli and Egyptian foreign ministries demonstrate that both parties feel that a definitive, perhaps strategic, change is taking place in the Strip and want to restore the situation to what it had been. It is doubtful this can be done. The closure of Gaza did not stop the Qassams, but now there are worrying signs that it could damage Israel’s relations with Egypt unless both countries’ leaderships are not careful in their responses.

“The crisis in Rafah was apparently not foreseen by the best of Israel’s policy makers. Now, after it has happened, it is worth using the crisis to set policies that are more creative than assassinations and starvation and to try to avoid becoming fixated on the usual, predictable responses and on laying blame in all directions. The Egyptians could now become the unwitting leaders in finding an agreed-on solution. This could be the time to assert joint responsibility for the border crossings, with the participation of the Palestinian government and international organizations.”