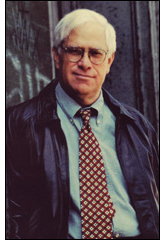 Editor’s update (Jan. 7): John Camp and Eric Bowen have landed in Kuwait and are waiting to travel into Iraq. Here is a Q&A with Camp before the pair departed.

What would possess a best-selling novelist, who made his mark in journalism years ago, to spend a couple of weeks in a war zone in January? The answer comes down to the basic passion that drives most journalists — curiosity about the world around us.

John Camp, who won a Pulitzer Prize in 1986 for the Pioneer Press, leaves Saturday for the Middle East. Accompanying Camp will be photojournalist Eric Bowen, who traveled to Iraq in February 2007 to report on Minnesota soldiers for KSTP-TV and other media. Camp and Bowen will be embedded with the 2-147th Assault Helicopter Battalion of the Minnesota National Guard in Balad, Iraq.

Planning for this year’s journey began early last fall, said MinnPost.com Editor and CEO Joel Kramer. Bowen, who once served in the active military, pitched the idea to editors when MinnPost.com was still setting up shop — in cyberspace as well as in Southeast Minneapolis.

“Shortly afterward, during a lunch with editors, John mentioned that he was interested in going to Iraq, and we knew right away that teaming a reporter/writer of John’s caliber with Eric would be powerful,” Kramer said. “Obviously, as a start-up, our resources are limited, but we can afford to do this within our news budget, and it’s a great opportunity for us and for our readers. We’re also excited to be partnering with KSTP-TV on this project.”

Camp, who writes novels under the pen name John Sandford, took time out from packing his gear to answer questions about his newest adventure.

MinnPost: You’ve already won a Pulitzer Prize and you’re a best-selling novelist. Many of your former colleagues at the Pioneer Press would say you’re entitled to take it easy at this point in your life. So, why go to Iraq now? Do you miss journalism? Are you looking for “color” for future novels?

John Camp: I’m going to Iraq because I’m interested in the war there, and because I’m interested in the cultural dynamics in the Middle East, where I have a good number of friends. I’ve traveled in Turkey, Egypt, Jordan and Israel, and would have loved to go to Iraq if that had been possible — but it wasn’t, because of the general anti-American feeling there since at least the 1970s. The war itself doesn’t really apply to my novels, which are local in nature, and I don’t plan a new career writing war stories. I’ve always thought of myself as a journalist; that was what I did.

MP: What kinds of stories are you interested in pursuing in Iraq?

JC: For most of my career, I was a general assignment reporter, so I’ll be looking for anything that comes along. My interests in doing this are not primarily literary — they are reportorial, and I’m particularly interested in what is happening with Minnesota folks, especially those in the National Guard. I’ve always thought of the Guard — and I think a lot of the members of the Guard did also — as people who respond to local emergencies, like floods and tornadoes, and do local public service, rather than as front-line troops. There is a possibility, I think, that they wound up in Iraq because of miscalculations by the war managers, or because the war managers really viewed them in a different way than the rest of us did. This may all involve a misunderstanding on my part, and I plan to investigate the question.

MP: What questions do you think aren’t being adequately answered either by the news media or the various nations?

JC: I’ve always had a fascination with the technical and small-scale aspects of life — the national media seem to have more interest in the sweeping political views. After reading Iraq war stories for several years, I really, in my mind’s eye, don’t know what it looks like, or smells like, or sounds like; or really, what an infantryman does now. I was in the Army in Korea in the 1960s, and that Army, I think, was much like that of my father’s, in World War II. This Army feels much different to me — but again, I’m not sure about that. If I have time, that’s another thing I’d like to ask about.

MP: What kinds of preparations have you made for this trip, other than buying a bullet-proof vest?

JC: I also bought a groin protector for the vest…

JC: Mostly it’s been standard reporter stuff. Get a phone (in this case, a satellite phone) a laptop, a camera, etc. Not much that I wouldn’t get to go to Boise. My working partner, Eric Bowen, has been dealing with a lot of the military connections, which in my experience, might be the hardest part. I was a newspaper editor in the Army, and I know something about the Army PR culture. We’ll be there such a short time that I worry about how much we can get done.

MP: Did you write about the Vietnam War or serve in that war? What kinds of thoughts or concerns are you having as you prepare to enter the Iraq war zone?

JC: I neither wrote about nor served in Vietnam, although I served in Korea during the Vietnam era (and was there during the Pueblo Incident, which almost touched off a war). I feel stupid for saying this, but I don’t have a lot of thoughts about what I’ll find in Iraq. I’m actually going there to find out about it. Since I’ve traveled in the Middle East quite a bit, and worked there on archaeological digs, I’ve got some ideas, but my experience is that ideas often don’t hold up in the light of experience. So, we’ll see.

Joe Soucheray, the internationally famous radio star and columnist for the Pioneer Press, has long given me a hard time for being, in his estimation, an inferior columnist, when I was writing a daily column. There may be a tiny element of truth in that — because, mostly, I don’t have a lot of opinions about things that other people have opinions on. In other words, I have an opinion shortage. I’m really more interested in facts and actualities.

I don’t know if MinnPost would be interested, but I’d like to get a front-line infantryman with all of his gear, strip him down to his shorts, lay all of his gear around him, take a photograph and then do a story about all the stuff a modern war-fighter has to carry. If you look at pictures of those guys in the papers, you ask, what are those funny little lever things on their helmets? Night vision deals? How do those work? How much does a modern gun weigh? How much ammo do they carry? How much water? Isn’t it awful hot in those long-sleeved BDUs in the summer? I’d like to know that stuff.

MP: How will you handle your celebrity with soldiers who are fans of your novels and know your real name? Will this fame work to your advantage or will it get in the way?

JC: Not to be impolite, I doubt that many soldiers there give a rat’s ass about my celebrity, whatever that may be.

MP: How are your family and friends reacting to your travel plans?

JC: They’re pretty interested. My kids, who are grown now and living in L.A., are used to me packing up and taking off to somewhere weird. A couple of years ago, some friends and I jumped in my truck and drove up to the North Slope of Alaska, because we wondered what all this oil stuff was about, and we wanted to see for ourselves. Didn’t write anything, we just looked at it.

I think the last big story I covered for the Pioneer Press was the huge Yellowstone fire, when much of the park burned down, and that probably felt as risky going in, as this does. My wife and I, before she passed away, would drive across the West Bank to get to our archaeological dig, because it was shorter and faster to go that way, and we never had any trouble. It may be a failure of imagination on my part, but I don’t brood much about what might happen, and neither does my family. What it is … is what it is.

Casey Selix, a former editor and writer for the Pioneer Press, is a news editor for MinnPost. She can be reached at cselix [at] minnpost [dot] com.