In a plot right out of 1940s film noir, Minneapolis City Hall is trying to get the state to take over the running of two old police and fire pension funds before they swamp the city’s already delicate financial condition. Without changes from the Legislature, the city faces a 200 percent increase in fund payments over the next two years, and a pension burden that mounts to $255.8 million over the next 20 years on these two funds alone.

The funds are fighting back, hoping to protect what seems, in this day and time, a sweetheart deal forged by guys in fedoras and trench coats who duck into doorways on rain-slick nights.

As might happen in an old black and white movie, the funds are controlled, almost exclusively, by the same people who get the pensions. No one has to lose sleep over bad investment decisions because, if stock market bets go bad, the city has to pick up the tab anyway.

Not only that, the pensioners get a raise every year based on how much the city pays cops and firefighters who are still working. In the police fund, hundreds of pensioners get raises based on how much three particular high-level officers get paid, including overtime. So, if there’s a crime wave or, God forbid, a bridge falls down and the cops have to work lots of overtime, well, ka-ching, ka-ching. The pensioners make out like bandits.

There’s more. The pension funds don’t have to sweat administrative costs, like legal fees, because the city has to pay all of those, too. The funds are organized in ways that seem to invite court challenges if, for example, the city wants changes on how the funds manage taxpayer contributions. When the disputes get inevitably to court, guess who pays the legal fees on both sides? The city. And the more the cases get stretched out in court, the more the city pays.

Expensive legal costs
Extraordinarily high legal fees drew special attention in a 2006 State Auditor’s report. “Minneapolis Fire and Minneapolis Police continued to have the highest administrative expenses on a per-member basis,” said the report, which examined six comparable funds in four Minnesota cities. “…Administrative expenses for these two plans were driven by high legal fees, which were over seven times as high as the fees paid by any of the other large plans.” (See charts. [PDF]) 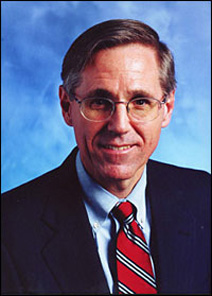 “We have no quarrel with paying our obligations,” said Patrick Born, the city finance director. “We want the plans to be fully funded. But we don’t like writing blank checks, especially when we don’t have very much participation in the decisions that they make.”

The city has just two members on the nine-member police board and two on the 12-member fire board. While the firefighters have done relatively well with their investments in recent years, the police fund has not. Neither fund is currently self-sustaining. Both funds are tied closely to their unions. They share the same attorney, Brian Rice (also chief counsel for the Park Board).

Rice acknowledged the city’s dilemma on legal fees and the extraordinary level of fees noted by the State Auditor. But he blamed the city for driving its pension complaints to court and for holding a contentious attitude. “I get up every day thanking God for Pat Born,” Rice said. “He’s very good for my business.”

Adversarial relationships
Bad blood is apparent between the funds and the current city administration, dating back through the last two elections. Film noir isn’t the movie genre through which Rice views the situation. “It’s more like the ‘Born Conspiracy,'” he said, naming the city’s finance director.

Born’s adversarial attitude, and that of Mayor R.T. Rybak and the current City Council, departs from the congenial history enjoyed by the two funds, Rice said. The Minneapolis Police Relief Association, founded in 1886, and the Minneapolis Firefighters’ Relief Association, founded in 1890, were self-sustaining through nearly all of their history, Rice said. But now that the funds are going through a rough spot, the city wants to shed its responsibility.

The higher administrative expenses for the Minneapolis fire and police funds appear to be driven by legal fees, according to a 2006 state auditor report.

“They act like the sky is falling,” Rice said. “It’s not like they’re bankrupt; they just need to do a better job of managing their debt.” The city doesn’t want to give the funds the credit they deserve for saving money in the past, he said, including convincing the state to pick up $20 million in pension costs in 2005.

As for the city’s complaint about lacking authority to oversee the funds and their investment decisions, and the city’s beef that the courts are the only remedy for changing policies, Rice answers the obvious. All of those things were negotiated. If City Hall didn’t like the rules, it should never have agreed to them.

Rice’s clients are 1,500 police officers and firefighters (or their survivors) hired before 1980. Only a handful are still working and not yet drawing benefits. Those hired since 1980 are covered by the state’s big pension pool, the Public Employees Retirement Association. PERA, says the city, is organized in a way that would allow greater predictability in scheduling its pension payments.

The heart of the legal disagreement is esoteric: What are the correct mortality tables and what constitutes the pay of active officers? But the differences in interpretation amount to millions of dollars. If the city wants to pay less on pensions, Rice said, it shouldn’t pay active officers so much overtime.

Rice also said that, contrary to the city’s assertions, there are administrative remedies short of going to court or to the Legislature, such as challenging the county tax levy portion for the funds.

‘Cozy’ arrangements
Despite the back-and-forth, it’s hard to shake the impression that the pension funds have fashioned themselves a sweetheart deal. The possibility that the overtime pay of just three officers could affect millions of dollars in pension benefits for hundreds of others seems an invitation to corruption.

But there’s no proof of that, and Born prefers to see it as an unintended consequence. Neither does he allege specific improprieties over Rice’s legal fees. He does, however, describe the pension’s arrangements with Rice as “cozy,” especially with the police fund, which, Born said, lacks experienced leaders. “Brian is very influential in how that fund is operated,” he said.

“These funds are like old families and they view the city as intruders,” Born continued. “Oversight is new to them, and they have almost a persecution complex about it.” He said that “relations have gotten very nasty, especially from their point of view and, perhaps, understandably so. We’re talking about peoples’ pensions. But we try to keep a business atmosphere on our side.”

Betsy Hodges, the 13th Ward council member, who’s also chief liaison to the Legislature, agreed. “We want to balance fairness for the retirees with fairness for the taxpayers. We have limited influence on the governance of these plans, but we have an unlimited obligation.” The plans’ lack of predictability hamper the city’s ability to schedule payments, she said, forcing the city to borrow money for ongoing expenses, a costly and unwise procedure.

Over the next two years, the city expects its costs for these two older pension funds to rise by 203 percent, to $14.2 million. That doesn’t include debt service. The city’s debt payments alone are expected to cost $36.5 million through 2015, partly because the police retirees recalculated upward their own life-expectancy assumptions, and, according to the city, no one had the authority to double-check their calculations. Altogether, the city says it could owe these two funds $255.8 million over the next 20 years.