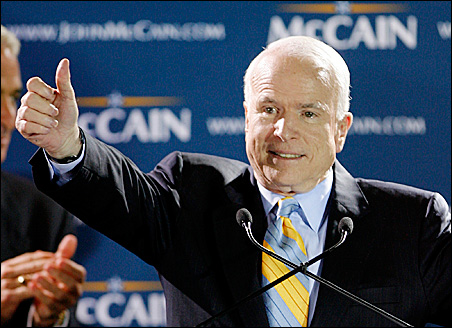 In a primary season with few conclusive results so far, Tuesday’s Florida Republican primary settled a couple things: Arizona Sen. John McCain appears to be the Republican front-runner and one-time front-runner Rudy Giuliani is about to leave the race.

But more questions will likely arise on the Democratic side later today.

CNN and other news organizations are reporting this morning that John Edwards, who has trailed Hillary Rodham Clinton and Barack Obama throughout the primary season, would drop out of the race this afternoon.

If out of the race, who will Edwards support? CNN quotes an Edwards aide saying the former senator from North Carolina does not plan to endorse either Clinton or Obama, at this time but may do so in the future.

Edwards addressed an enthusiastic crowd of about 1,200 at a St. Paul union hall last night, although an Edwards campaign worker told MinnPost the candidate seemed subdued before speaking to supporters, perhaps knowing this would be one of his last rallies.

And Republicans are expected to lose a candidate today as well. McCain defeated former Massachusetts Gov. Mitt Romney 36 to 31 percent in Florida with Giuliani a distant third. Several news organizations are reporting that the former New York mayor will drop out and endorse McCain.

Broad support for McCain
“Mr. McCain’s narrow victory showed he could win in a state where only Republicans were allowed to vote — not just in states like New Hampshire and South Carolina, where his earlier victories were fueled in part by independent voters,” reported The New York Times. And in Florida, even a slim victory is sweet: The state awards its 57 delegates, the most of any contest yet, on a winner-take-all basis.”

The Associated Press reported that McCain “won across a broad swath of voters, old people, Hispanics, moderates, liberal Republicans and, of course, independents, according to exit polls. He was essentially tied with Romney among veterans and while Romney and former Arkansas Gov. Mike Huckabee shared the lead among born-again Christian voters, McCain trailed only slightly.”

Clinton bested Obama in the Democratic primary, but there were no delegates at stake because the national Democratic Party was penalizing the state party for moving up the Florida primary and neither candidate campaigned in the state. That didn’t stop Clinton, however, from making an appearance in the state on election night and saying she would try “to make sure not only are Florida’s Democratic delegates seated, but Florida is in the winning column in 2008.”

But in Florida, it was the Republican contest that got most of the attention, in part because of the increasingly strong attacks McCain and Romney made against each other with Romney accusing McCain of being liberal and not understanding economic issues and McCain claiming Romney doesn’t understand national security and accusing him of flip flopping on issues.

“While McCain has the momentum and will inherit most of Giuliani’s supporters when he drops out, Romney, who can spend his own money, will now benefit from all those Republicans who McCain has pissed off over the years,” wrote Slate’s John Dickerson. “Rush Limbaugh is already on Romney’s side, and Tom DeLay will no doubt come out of retirement with a broken beer bottle.”

York concluded that “it’s hard to see one side convincing the other of the superiority of its case or its candidate. In the end, someone will just have to win.”

The process of trying to win in more than 20 states on Super Tuesday (Feb. 5) continues tonight with a Republican debate at the Ronald Reagan Library in California. Giuliani probably will not participate. A few months ago, his absence seemed highly unlikely. He was the national front-runner and he decided to put all his effort into winning Florida.

Michael Powell and Michael Powell wrote in The New York Times that Giuliani’s “free fall [was] so precipitous as to be breathtaking…only a few months earlier, he had talked about the state [Florida] as his leaping-off point to winning the nomination. As Mr. Giuliani ponders his political mortality, many advisers and political observers point to the hubris and strategic miscalculations that plagued his campaign.” The Times cited the fact that Giuliani relied too heavily on his old New York advisers who had limited national experience, on his decision to spend heavily on direct-mail rather than building a campaign organization in South Carolina and New Hampshire and on his reluctance to put up a strong rhetorical fight against his opponents.

The Times concluded that “perhaps a simpler dynamic was at work: The more that Republican voters saw of Mr. Giuliani, the less they wanted to vote for him.”

McCain emerges as GOP front-runner as others fall away