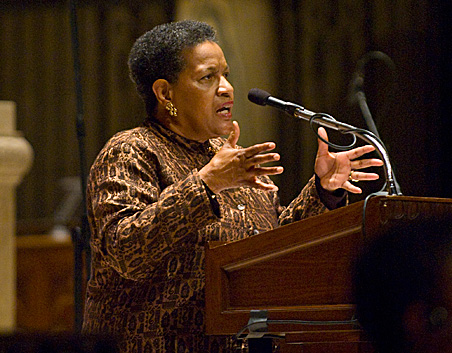 Myrlie Evers-Williams was 17 years old when she met her husband. She recounts how she was standing under a tree on the campus of Alcorn A&M College when Medgar Evers, seven years her senior, approached her and said, “You are going to be the mother of my children.”

They married one year later on Christmas Eve, had three children and a dozen years together, before, as she describes, “a bullet snatched him away from us.”

Medgar Evers’ murder in the driveway of his home in Jackson, Miss., in 1963 was one in a litany of tragic markers that brought national attention to the civil rights movement, a turning point that understandably broke Evers-Williams’ heart.

“I got so filled with anger and hatred,” she told the crowd of several thousand at the Basilica of Saint Mary who gathered Tuesday for the Minneapolis Community and Technical College’s 18th annual birthday tribute to Dr. Martin Luther King Jr. “I was angry for what was happening to my family and to my people in this country.”

There can be change
Evers-Williams,75, spent most of what is nearly half a century bringing her husband’s killer to justice. And through her work as the first female president of the NAACP, she kept his dream and the dream of Dr. Martin Luther King Jr. alive.

“I have been blessed to see numerous changes,” she said during her address at the event, which I emceed. “My heart is full. What I see happening in this country has made me happy, and answered the frustration I used to hear when Medgar would ask out of despair, ‘Will we ever be ready?'”

And without mentioning names, yet in words that echoed the cadence and call of Democratic presidential candidate Barack Obama, Evers-Williams told the crowd: “I felt the hope swell in my heart, there is hope. There can be change. Look at who is at the forefront, young people, who are saying it is up to us to effect change.”

Only one regret
After the speeches were over and anthems had been sung and the crowd had cleared, I found myself alone with Evers-Williams in the quiet of the Basilica’s sacristy.

I asked her who in this political race would get her vote. Again, she mentioned no names and would only say that she is a registered Democrat. She expressed concern about recent inner-party sparring, and a fear that, “All the good that has been done will be lost if it continues to escalate.”

And then Evers-Williams began to reflect and speak about history as only those who witnessed it can. 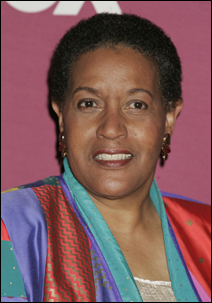 She remembered attending Dr. King’s, funeral as if it were yesterday. There, she briefly met a distraught Jacqueline Kennedy. “She just placed her hand over her mouth and said, ‘Oh my god,'” Evers-Williams recalled.

Evers-Williams reminisced about marching with Ethel and Bobby Kennedy as well: “She,” referring to Ethel “would be next.” Next to become — like Evers-Williams — a widow.

And she then spoke of her one regret in life.

On Aug. 28, 1963 Evers-Williams was scheduled to speak from the same platform that Dr. King would deliver his famous “I Have a Dream” speech in Washington, D.C. But she said she had also committed to speak at an Elks club meeting in Boston.

“Roy Wilkins told me to cancel Boston and get to Washington, but I had given my word,” she said.

So Evers-Williams went to Boston to speak and later headed to Washington. But the massive crowd that had descended on Washington that day kept her from making it to the Lincoln Memorial in time.

“Daisy Bates of the Little Rock Nine spoke instead, even though my name was listed on the official program,” she told me.

“That is my one regret; that I kept my promise.”