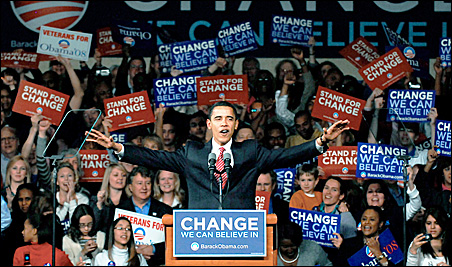 Call it pre-emptive spin, but a Tuesday teleconference put on by the Barack Obama campaign sure made something out of nothing.

The nothing, of course, is the Florida primary, which carries no delegates today under Democratic National Committee penalty because Florida Dems moved the primary date up against party wishes. The something was how much time — more than 20 minutes — Obama campaign manager David Plouffe and Sen. John Kerry (unannounced phone cameo!) spent admonishing reporters for acting like Florida mattered.

For making something out of nothing, Jerry Seinfeld had you-know-what on these two.

“My understanding is that Clinton campaign had a call today suggesting that Florida ought to be covered by all you folks in some kind of serious fashion,” Kerry intoned at the outset. “What this race is about right now is delegates. That’s the fight that most people are seeing it framed as today. The bottom line is Florida does not offer delegates.”

Kerry went on to suggest that the primary “should not be a spin race,” and that “a lot of us should reject” the kind of politics as usual that the Clinton campaign was using — that is, she’s polling well in Florida, so how dare she trumpet a win?

The idea that a teleconference was called to counter-spin the spin coming from the enemy campaign was a meta-irony apparently lost on Kerry.

When Hillary was campaigning around Iowa and New Hampshire, Kerry noted, she said that Florida didn’t matter. “I believe that’s almost a direct quote,” he said.

Kerry agreed to a point, emphasizing again that the “party chairman awards zero delegates” in Florida, before stammering out something about “efforts to create something that isn’t supposed to be something.”

‘A message about electability’
Plouffe picked up by convincingly declaring that the Obama campaign had volunteers, staff, money and groundwork laid in all 22 states come Feb. 5. “We are very well organized in all 22 of them,” Plouffe said, adding pointedly, “all are offering delegates.”

Plouffe has the distinction of being the only source I’ve encountered who actually speaks faster than former Minneapolis City Council member Jim Niland, a notorious rapid-responder. So he quickly made a case for Obama’s “electability” (the slug on the press release was “National Electability”), the inroads the campaign has made with Latino voters, and how an Obama ticket will help the whole Democratic Party.

“We can send a very strong message about electability,” he said. “We can win in a state, down ballot, and set a climate,” he added, and “with grassroots organizations — we have a dominate advantage.” He also noted, more importantly, that the campaign has 600,000 donors and raised $5 million online since South Carolina.

(By contrast, the Edwards campaign was bragging Monday that their man had raised $4 million in all of January.)

But mostly, Plouffe couldn’t resist taking a shot at Clinton’s newfound interest — a “political maneuver” he sniffed — in Florida, a state where apparently even nothing means something.

“Our focus is on Feb. 5, and she’s spending [the] night in Florida,” he concluded, referring to a Clinton appearance in the state after the polls close this evening. “Which is just fine with us.”

Obama campaign on Florida: Move along, nothing to see here