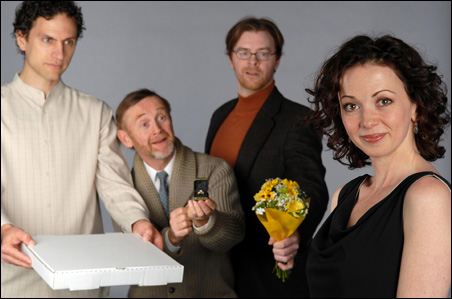 Stacia Rice is having a bad day. She’s locked her keys in her car. Then she gets stuck in a massive traffic jam after a tanker truck overturns on Interstate 94.

Yet, when she makes it to the Mixed Blood Theatre in Minneapolis for an interview, none of it seems to affect her. In person, Rice is as poised as any of the characters she has played on stage. Those roles, from Helen Keller’s teacher Annie Sullivan to Jane Eyre, have made the performer a top prospect in the local theater community.

Her latest role is Professor Sarah Middleton, an American who falls in love with a Kurdish refugee in the Mixed Blood Theatre production of “The Poetry of Pizza.” The show marks the first time Rice (whose first name is pronounced “stay-shuh”) has acted on the longstanding company’s venerable West Bank stage.

“It’s a lighthearted love story, but also a subtle look at the plight of refugees,” Rice said of Deborah Brevoort‘s play, which received its world premiere late last year at the Purple Rose Theatre Company in Michigan. “And the love story involves older adults, which is not at all common.”

The play follows the relationship of Middleton, a poetry professor newly relocated to Denmark to teach at the University of Copenhagen. One night, she goes out for pizza at the Vermundsgade Pizzeria, and falls in love with the pizza maker — a refugee named Soran Saleen (Ron Menzel). Their relationship draws the interest of an assortment of Danish and Kurdish characters, which leads to the show’s numerous comedic situations.

“The playwright calls the play a ‘farce without doors,’ ” Rice said.

Rehearsals did not start until after Christmas, giving them a truncated rehearsal schedule. “You get the show ready in the time you have,” Rice said. “I did ‘Streetcar Named Desire’ — as Blanche — in 12 four-hour rehearsals.”

According to director John Miller-Stephany, having a veteran cast for “The Poetry of Pizza” helped the process immeasurably.

“I like to think (the limited time) added extra energy,” he said. “The cast is very talented and very hard-working. It might be a problem if you had actors who were on the lazy side, but these actors are motivated and very much an ensemble.”

The eight-actor cast faces a number of challenges within the script as well. “The play is quirky,” Miller-Stephany said. “There are moments, for the scene to work, where you need farcical sensibilities. There are others that are more in the romantic comedy vein. We needed to find actors who were skilled and could shift gears quickly.”

Rice’s career may have taken off in the last few years, but her interest in performing goes back to childhood. “I was asked at age 4 what I wanted to be when I grew up and I said ‘a performer.’ I don’t know where that came from, but it was something inside of me from the beginning.”

At 12, Rice went to an audition at Children’s Theatre Company to see if acting would be something that she might want to pursue. She was enraptured with the experience and went on to perform with the company. In adulthood, she took a 10-year detour into advertising. She couldn’t shake the acting bug, however, and slowly directed more energy to the stage. Now, in her late 30s, she has carved a singular niche for herself as a performer. 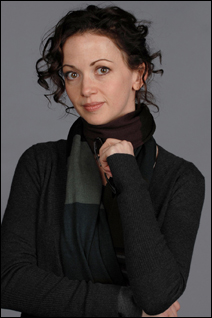 “I was blessed to be a late bloomer,” she said. “I appreciate every job that I get. If I had been given the opportunity at a younger age to act, I would have missed out on the life experiences that I had. I wouldn’t be the person I am now.”

For the professor, Rice needs to go through a transformation, from academic-bound loner to a more open lover. “She is locked in the ivory tower of academia and isn’t in touch with the other parts of her life,” Miller-Stephany said. “Stacia is able to play that kind of intelligence and can also be transformational as Sarah starts to loosen up and love a real man instead of iambic pentameter. Stacia has a range that can make good use of that.”

Last fall, Rice took the Guthrie stage in perhaps her most iconic role — as the titular character in “Jane Eyre,” based on the classic book by Charlotte Bronte. (You can see Rice discussing the stage version here.) The well-attended production introduced Rice to a new audience and prompted the Guthrie to reprise it this March, with Rice in the starring role again.

“Jane is a woman who does not fall into a traditional place,” she said. “She doesn’t fall into a man’s arms for love. She is always true to herself and her situation. She is resilient and fiery. And she did this at a time when it wasn’t expected of a woman.”

The role led directly to her work at Mixed Blood because Miller-Stephany directed both plays. “I thought it would be fun for her to do a little comedy. She’s a real wonderful actress to work with, and I just like being in the room with her.”

Though Rice enjoys the experience of working at the Guthrie — having support staff, including dressers, is always a nice benefit — her main fondness is for the smaller theaters dotting the Twin Cities landscape.

“You can take a more subtle approach to your characters. And the exchange of energy with the audience is much more immediate,” Rice said.

Rice runs the Torch Theater Company out of the Minneapolis Theatre Garage. “I have no staff and no budget, but it is amazing that there are so many people in the community there to support you. Our shows have been very well received.” (The current Torch show, a co-production with Artisphere titled “Looking for Normal,” runs through Feb. 3.)

No matter the size of the theater, what happens in rehearsal and later in front of an audience is a special event — an experience hard to describe without sounding a bit mystical.

“It’s about the cast and crew coming together and exchanging energy,” Rice said of her craft. “When the audience comes in, it’s also about exchanging energy with them. If your energy is in the right place, it’s possible for everyone to have a wonderful time together.”

Ed Huyck is a Minneapolis-based arts and entertainment writer. Read his

‘Poetry of Pizza’: Stacia Rice will get a little comic relief between stagings of ‘Jane Eyre’