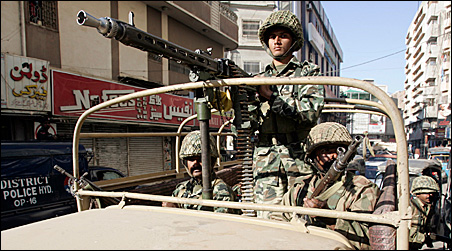 REUTERS/Akram Shahid
Pakistani soldiers patrol a street in Hyderabad. Pakistan will deploy army troops and paramilitary soldiers to ensure security in a general election postponed until Feb. 18 after the assassination of opposition leader Benazir Bhutto.

Black hats vs. white hats — as in bad guys vs. good guys — are central to American mythology and culture. The nation prefers clear-cut dichotomies — from its cowboy legends to its two-party politics.

Now that passion for clean choices is clashing head-on with reality in Pakistan, where the slaying of opposition leader Benazir Bhutto has further roiled a political situation that always has been a hot stew of ethnic, religious, regional and economic interests.

As Pakistan careens toward parliamentary elections, expected in February, the only clear vision is that stakes are dangerously high for U.S. interests in a region where the forces of terrorism are elusively entrenched.

“We are trying to spin matters behind the scenes in a way that will be beneficial for us, but we don’t understand the complexity of the society where there are many threads you have to hold in order to be in office,” said William Beeman, a scholar of the region who chairs the University of Minnesota Anthropology Department and also has been a consultant for the United Nations and the U.S. Departments of State and Defense.

There are no pure white hats in Pakistan, Beeman said. Bhutto lived outside the country for years in order to avoid criminal charges of corruption. President Pervez Musharraf once worked with military intelligence to support the Taliban, and he appeared to look the other way while Pakistani scientists worked on proliferating nuclear arms technology.

“People who come to power in Pakistan have to decide what cards they are going to play in the political game,” Beeman said. “You end up having to do things that compromise ethical standards.”

Yet the United States has virtually adorned Musharraf with a white hat, Beeman said, risking a repeat of blunders it made decades ago in Iran by tying its fate to the Shah and then watching helplessly when he was deposed in the revolution of 1978-79.

Founded on ethnic rifts
On the surface, religion appears to unite Pakistanis. The country is 97 percent Muslim. Dig deeper, though, and you find a land twice the size of California seething with feuds that go back to the 1940s when Pakistan was assembled from former Indian states. Its 165 million people speak more than six different languages.

“From Pakistan’s very beginning, it was a mosaic,” said former ambassador Robert Flaten of Northfield, Minn., who lived in Peshawar during the 1960s and later traveled to the country on behalf of the United States. Over the years, he met with Bhutto occasionally at official dinners and meetings. (He was U.S. ambassador to Rwanda from 1990 to 1993.)

While Pakistan is solidly Muslim, Flaten said, “the ruling elite has largely been secular…. That’s where you find enormous tension.”

So while Bhutto followed the Muslim custom of wearing a scarf, her politics were driven by the fact that she was Sindhi, a powerful ethnic minority that resented the Punjabis who dominate the military.

Even those lines, however, are not clear-cut in complex Pakistan.

For example, while Bhutto convinced the United States that she could pull together enough support to help legitimize Musharraf’s government, she was also “a hero to the Sindhi separatist movement” which has struggled for decades for independence, Tristan Mabry, a political scientist at Georgetown University, said in an opinion article this week in the Philadelphia Inquirer.

“Under British colonial rule, the Sindhis were regional ministers of their own affairs,” Mabry said. “After partition in 1947, the Sindhis were marginalized by politically powerful migrants, the Mohajirs…who settled primarily in the capital of the province, Karachi, (and) are now represented in Islamabad by one of their own: Musharraf.”

On the heels of partition came the Cold War, when the roots of modern U.S. policy in Pakistan were planted. Washington wanted to help the Pakistanis stand up to the Soviet Union, Flaten said. The Soviets, of course, were the bad guys, and Pakistanis would wear the white hats.

Pakistan, however, was more interested in standing up to India.

Serious rifts
“We have not dealt with the relationship in a totally useful way because of these differing points of view,” Flaten said. “One reason we ended up in such a mess with the Taliban was because the Pakistanis wanted to keep the Indians from mucking around in Afghanistan.”

To be truly effective in Pakistan, the United States should have tried to “figure out how to create tribal coalitions that one could work through a lot of the issues,” Flaten said.

But that would take intensive work on the ground. Instead, the United States invested heavily in one leader after another.

“We put billions of dollars in there, but we didn’t have people there to watch it,” he said.

There were serious rifts in the relationship over the years, especially after Pakistan developed its own nuclear weapons.

But Pakistan got the white hat again after September 2001, when the United States geared up to battle a different war, this time against terror. Musharraf quickly shifted gears too and agreed to support the campaign to eliminate the Taliban in Afghanistan.

“Pakistan has provided extensive assistance in the war on terror by capturing more than 600 al-Qaida members and their allies,” the State Department said in its latest briefing on the country.

Now — with Bhutto dead, Musharraf in deep political trouble and the country in raging chaos — it isn’t clear where U.S. interests lie or what options might be available.

Bhutto’s death “casts a dark shadow across Pakistan, a nuclear-armed state with a long history of militarism and militancy and may auger a deeper and irreversible slide into Islamist violence,” C. Christine Fair of the Rand Corp. said in a commentary piece Monday in the Washington Times.

While the nuclear arsenal appears to be secure for now, Fair said, “The successful attack on Mrs. Bhutto will likely embolden militants across Pakistan who have acted with increasing and horrifying impunity in recent years.”

Should Pakistan disintegrate, it will be “enormously complicated” to put the pieces back together, Flaten said.

“We don’t fully understand the problems,” he said. “I’m not sure Musharraf does either…. If he has fully understood what was going on, he has played a very gray game. We would like him to be 100 percent with us in the fight on terror…. But he either isn’t fully in control, or he doesn’t understand what is going on or he is playing a double game.”

Religions: Muslim 97 percent, small minorities of Christians, Hindus and others.

Languages: Urdu (national and official), English, Punjabi, Sindhi, Pushtu, Baloch, Hindko, Brahui, Saraiki (Punjabi variant). Although Urdu is an official language of Pakistan, it is spoken as a first language by only 8 percent of the population; 48 percent speak Punjabi, 12 percent Sindhi, 10 percent Saraiki, 8 percent Pushtu, 3 percent Baloch, and 3 percent other. Urdu, Punjabi, Pushtu, and Baloch are Indo-European languages. English is the other official language, and is widely used in government, commerce, the officer ranks of the military, and many institutions of higher learning.