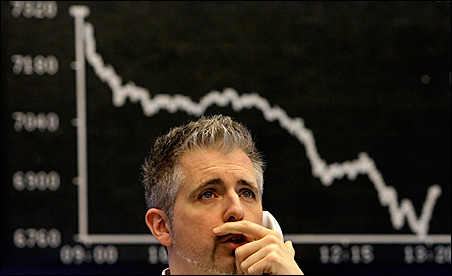 REUTERS/Alex Grimm
A trader on the phone in front of the DAX board at the Frankfurt stock exchange. Germany’s DAX index of leading shares declined 5 percent Monday.

While Americans were on holiday Monday — traveling, attending events honoring the Rev. Martin Luther King Jr., shopping — the rest of the world was registering its fear of a possible U.S. recession. Tumbling stocks in markets from Tokyo to Frankfurt demonstrated global pessimism about the likely effectiveness of President Bush’s new stimulus plan. “It’s another horrible day,” Francis Lun, a general manager at Fulbright Securities in Hong Kong, told the Associated Press. “It’s because of disappointment that the U.S. stimulus [package] is too little, too late and investors feel it won’t help the economy recover.”

Today began no better in Asia, leading the Federal Reserve to take emergency action. As Reuters reported: “Stocks tumbled across Asia on Tuesday, and U.S. stock index futures sank, as panic gripped markets that a U.S. recession could derail global economic growth, sending investors fleeing to safe-haven government bonds. Share markets from Tokyo and Hong Kong to Seoul and Sydney slumped around 5 percent … .” The Fed, the Washington Post reported, “cut a key U.S. interest rate by three-quarters of a percentage point this morning as a global stock sell-off continued on Wall Street today, with the Dow Jones industrial average dropping more than 400 points in its opening minutes.

“The surprise rate cut, made via an emergency videoconference on Monday night, responds to a growing sense of crisis in world financial markets, which have been buffeted by problems that began in the U.S. mortgage markets but have now spread well beyond it. It is the largest single rate cut in at least 18 years … .”

Markets not impressed
In a statement, the Fed said it “took this action in view of a weakening of the economic outlook and increasing downside risks to growth. While strains in short-term funding markets have eased somewhat, broader financial market conditions have continued to deteriorate and credit has tightened further for some businesses and households. Moreover, incoming information indicates a deepening of the housing contraction as well as some softening in labor markets.”

If hopes last week were pinned on prospective actions of the Fed and Congress, Bush’s announcement Friday of a possible $145 billion stimulus package clearly impressed neither Wall Street nor global markets. The New York Times noted: “The angst about the United States belies the popular theory that Europe and Asia are not as dependent on the American economy as they once were, in part because they trade more with one another. The theory, known as decoupling, has been used to explain why such economies as China and Germany have kept growing robustly, even as the United States has slowed.

” ‘The market is not at all convinced about decoupling, and I think the market is probably right,’ said Thomas Mayer, the chief European economist at Deutsche Bank in London. ‘When you look at it more closely, we’re suffering from the same issues.’ “

The world’s reaction had a quick effect on Capitol Hill, the Washington Post said. “Congressional leaders yesterday acknowledged how serious the European and Asian sell-offs were and said they may have to rethink the size of the stimulus and its content,” it reported. “Democrats still favor tilting the package toward middle-class and poorer Americans, who would be the quickest to spend any tax refunds or government checks. But Republicans have been pushing for more incentives for investors and business, a possible reaction to the stock-market jitters.” This week should reveal where some of that rethinking goes.

New stimulus plans
A lot of ideas are out there waiting to be mined. For example, a recent paper (PDF) on fiscal stimulus put out by the Hamilton Project at the Brookings Institution concluded, “Policies that are potentially most effective include temporary and refundable tax credits, temporary increases in food stamps, and a temporary extension of unemployment insurance benefits.”

Congressional leaders will undoubtedly be watching the markets today and responding with some new short-term stimulus plans. As for the longer term, Daniel Gross wrote at slate.com that a recession should be a wake-up call to American companies, many of which “are still wedded to a strategy that relies almost exclusively on selling products and services to American customers. … In today’s economy, especially with U.S. consumer demand shrinking, that’s simply not good enough.”

Compared with “the growing ranks of sophisticated, well-capitalised competitors in Europe, Asia, and Latin America, many American companies simply haven’t committed to being aggressive players in the global economy,” Gross wrote. “Which is why this odd recession could function as a wake-up call for Americans to get passports, buy some Berlitz tapes, and start thinking of foreign markets not simply as a place to source cheap goods or raise expensive capital, but as the new home market.”

Stocks tumble and tumble: Is this our wake-up call?