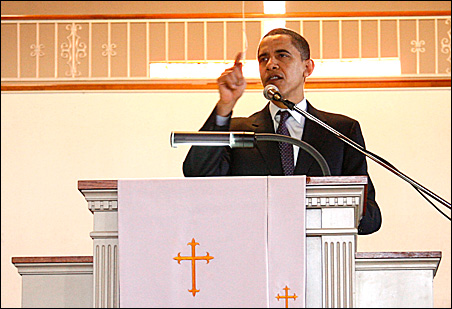 Perhaps today’s Republican primary in Michigan will shift the media spotlight away from Democratic infighting as Sens. Barack Obama and Hillary Rodham Clinton pull their camps back from several days of destructive rhetoric. That would be a good thing for both candidates. The prospect of their surrogates continuing to serially take offense at the opponent’s supposed sexism or racism is not a pretty one as the Jan. 26 South Carolina primary nears.

When viewed in their context, Obama’s debate comment on Hillary Clinton’s likability, Bill Clinton’s “fairy tale” remark and Hillary’s MLK/LBJ comments all look pretty benign. And it appears that by Monday both candidates had decided the discussion had gotten out of hand. National Public Radio reported that Obama called reporters together “to say he didn’t want the campaign ‘to degenerate into so much tit-for-tat, back-and-forth that we lose sight of why all of us are doing this.’ ” And in Manhattan, the New York Times reported, Sen. Clinton said, “We may differ on minor matters, but when it comes to what is really important, we are family.”

‘Change’ is the byword for both parties’ candidates
Now maybe they can get back to who’d make a more effective change agent.

It’s a role all the presidential candidates have attempted to claim, though it’s a harder sell for those of the president’s party. Nevertheless, Republicans, too, are making the case. Indeed, E.J. Dionne Jr. wrote in the Washington Post today that “Republican Mitt Romney is edging away from a strategy based on pure conservative orthodoxy, presenting himself instead as the true candidate of change. ‘If ever there’s been a time we needed change in Washington, it’s now,’ Romney has been saying. He tries to minimize the fact that the capital whose habits he deplores has been dominated by George W. Bush. Yet the ‘Change Begins With Us’ placards held aloft at recent Romney campaign rallies bear a striking resemblance (even graphically) to those ‘Change We Can Believe In’ posters that appear at Barack Obama’s rallies.”

In Florida on Monday, Rudy Giuliani followed suit. The Associated Press reported that he said on his campaign bus: “I was a mayor who was a change agent. Whether you agree with my changes or not, I think you’d have to say I was probably the mayor of New York City who, at least in modern times, brought about the most change.”

While the public’s appetite for change is readily apparent, an analysis in The Economist of London opined that Americans don’t really know what it is that they want: “Sure, they are desperate for ‘change’: with the economy reeling, politics gridlocked, young people dying in Iraq and the Bush administration a global byword for callous incompetence, huge numbers of Americans have long believed their country is on the wrong track. But what sort of change? And who can deliver it?”

Economist magazine argues that ‘courage’ may be real test
The article doesn’t answer its questions; it predicts that Obama would get “a hero’s welcome” on the international stage, but adds that “the next president will get that whoever he or she is, simply for not being George Bush and not having made such a hash of Iraq. Thereafter, America will be judged on its actions, not its words.” It says of Clinton, “She must learn poetry from Mr. Obama, just as he needs to learn prose from her.” And while noting that the Republicans are the party of incumbency, and therefore less able to break from the status quo, the article concludes that there is a lesson for all presidential candidates in Sen. John McCain’s political bravery: “When voters don’t quite know their own minds, they turn to those who do: 2008 is a year for courage.”

Today is high stakes for McCain, as well as for Mitt Romney: As Nancy Cook of NPR put it, “Romney and McCain are pinning their presidential hopes on Michigan, where both have strong ties. Romney grew up there; his father also served as the state’s governor in the 1960s. McCain won the primary there in 2000.

“Both candidates must do well in Michigan. McCain needs to prove his campaign is bigger than the New Hampshire primary. Romney needs to prove he’s still viable, having placed second in Iowa and New Hampshire.” So today, eyes will turn to the GOP — for which the Democrats, weary of their internal sniping over gender and race, should be relieved.