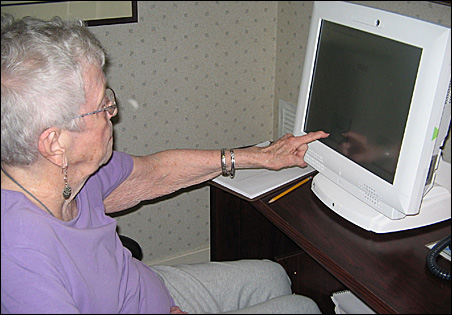 MinnPost photo by Christina Capecchi
Honor Hacker, 82, is one of 40 Maplewood residents who uses [m]Power, a senior-friendly touch-screen computer aimed at preserving mental sharpness. It’s being tested in 11 senior-housing companies across the country, including Ecumen.

On Wednesday, she will address members of the U.S. Senate, a privilege that landed her inclusion in a recent documentary.

“This has gone crazy,” said Hacker, her light blue eyes shining behind her bifocals.

When Ecumen’s chief operating officer, Kathy Bakkenist, asked Hacker to testify before the Senate about the technologies she uses at Ecumen’s Maplewood assisted-living community, Hacker readily acquiesced. “Sure,” she said, “that’s just downtown.”

“No,” Bakkenist replied, “I mean the United States Senate in Washington D.C.”

Through a cloud of disbelief, Hacker agreed. “Half an hour later, I said, ‘What did you ask me to do?’ “

Her big moment almost has arrived. On Wednesday afternoon, Hacker and Bakkenist will testify before members and staff of the Senate Special Committee on Aging, the Senate Health, Education, Labor and Pensions Committee and the Senate Finance Committee. They’ll be advocating for Senate 908, a bipartisan bill sponsored by five senators, including Sen. Norm Coleman, calling for $1.5 million of research and development of technologies catered to aging adults.

Though Hacker is “a little nervous” and still a bit stunned, the retired schoolteacher from St. Paul is well prepared to give her 3-minute speech. Every day she performs a 30-minute session on [m]Power, a touch-screen computer produced by Dakim designed to maintain seniors’ mental acuity through cognitive drills.

To log in, Hacker sits before a webcam and enters her initials on an oversized alphabet. Then an image of Rosie the Riveter flashes, and the chipper widow delves into the day’s trivia.

“I hadn’t any idea,” Hacker remarks when she learns Yale’s mascot.

Soon, she is tapping her toes to “Salvador Softshoe’s Memory Mambo,” trying to set a seven-number combination into a memorable rhythm. Toward the drill’s end, the order of the numbers is scrambled.

“Now look what they did!” Hacker exclaims.

She nails the combination and playfully echoes the automated affirmation, “Holy cow!”

Hacker’s arthritic fingers no longer can handle a keyboard, but the touch screen is easy for her.

At the session’s close, [m]Power scores Hacker’s short- and long-term memory, critical thinking and visual spatial skills. It also asks if the difficulty of the session was just right, too hard or too easy.

“If you miss a day or two, you can feel yourself slip,” Hacker said.

Preparing for the ‘age wave’ Minnesota is on the forefront of a nationwide effort to meet the “age wage” of Boomers with innovative technology. Two years ago, the Department of Human Services initiated a plan called Transform 2010, aimed at enabling older Minnesotans to live “as independently as possible.” The most grounded of its five lofty objectives is to “maximize the use of technology.”

That goal is being put into practice at Ecumen, where a number of high-tech pilot programs are under way, beginning at Twin Cities sites and spreading through the 65 statewide.

“We’re going to have an unprecedented number of boomers accessing health care, and with that comes this different mindset about consumerism,” said Bakkenist, Ecumen’s COO and senior vice president of strategy and operations. “Boomers are savvy consumers, and they’re used to having lots of choices. They like their independence. They’re going to want a different world than what their parents, many of whom come from the Great Depression, live with.”

The key to achieving that world: “We can use technology as a tool that can help us to help people remain at home where they can age in place and where they can have some control over their own health care and they can manage themselves.”

QuietCare flags worrisome irregularities, such as if someone spends more than 45 minutes in the bathroom or doesn’t get out of bed at her usual hour. When that happens, an on-call nurse is alerted. The housing director and the residents’ relatives also are notified via a red circle that appears on a routinely-updated, password-protected website.

Some red-circle situations are dismissed; the senior may be ill or may have stayed up unusually late the night before. But 70 percent of the time, they signal legitimate causes of concern that require “interventions,” said Wendy Traffie, housing director of Ecumen’s Maplewood community, Lakeview Commons. “At this stage of the game, so many of our residents are creatures of habit,” Traffie said.

At any given moment, Traffie can view the QuietCare data of all 105 Lakeview residents. With the color code of red, yellow and green circles, based on the stoplight system, it’s easy to spot problems at a glance.

QuietCare was beta-tested in three states: Pennsylvania, New York and New Jersey. About 10 months later, in 2005, Ecumen began to pilot the technology, marking the first assisted-living community to try it out. The producer, Living Independently, has used Ecumen “as a segue to market it and expand it to bigger markets,” Bakkenist said.

When Ecumen began using QuietCare, some residents worried it was an invasion of privacy. Today, Traffie said, many find it comforting, and their far-flung children appreciate the easy access to such vital information.

No more 911
Using this technology to “learn” residents may seem impersonal, but Traffie says she knows the residents better than ever. “If gives us a clearer picture of residents’ health and their changing needs.”

Perhaps the most impressive news: Ecumen’s staff is acting on this new information. It revamped its nursing staffing to more accurately accommodate residents’ needs. Activity occurs across a wider time spectrum, it turns out, so nurse shifts have been added and extended, and evening programs have been created to serve the many night owls they’re now aware of.

The data also hint at other areas of need, such as the surprising prevalence of insomnia.

The surest sign of progress may be the fact that 911 calls have dropped 25 percent, making them extremely rare, according to Traffie. That’s the preventative nature of QuietCare, she said: It allows you to swoop in and help a resident who hasn’t taken his meds or who has fallen in her bathroom — before it becomes an emergency.

The pilot of [m]Power, which has been under way for 13 months now, also lends Ecumen a front-runner status; it is one of 11 senior-housing companies nationwide using the computers, and the only one in Minnesota.

Like QuietCare, [m]Power has had a positive impact, Traffie said. “The residents who use it have more energy and are more focused and engaged.” Rather than napping after meals, they’re now requesting stimulating activities, such as art instruction and continuing ed classes.

Plus they’re equipped with terrific conversation starters. Many meal-time discussions are punctuated by [m]Power references. “We do a lot of kidding,” Honor Hacker said. “‘I already knew that; I learned it on [m]Power.'”

In fact, Hacker couldn’t resist slipping some newly learned trivia into her Senate speech. Tomorrow, during her brief explanation of the computer, she plans to say: “President Taft had the distinction of being our country’s heaviest president. I did not know that, and it’s a little bit of trivia that I leave you with today.”

The ability to keep her mind sharp and the opportunity to relay that experience to the Senate have turned Hacker’s notion of aging inside out. “I just loved teaching, and when I retired, I kind of assumed it would be the end of the fun,” she said. “Boy, was I wrong.”

[m]Power developer: Dakim
Year pilot began at Ecumen: 2006
Cost to residents: None. Ecumen covers the cost, which is $5,500 for each of two computers.
Number of residents currently using it: 40

This March, Ecumen plans to begin a beta test of senior-friendly social networking sites. It will be one of four senior-housing companies nationwide testing out the new frontier.

“It’ll be like Facebook for seniors,” said COO Kathy Bakkenist. The software will require significant retooling. It will be simpler, larger and brighter than its popular model, and it’ll be entirely operable by touch screen. But the benefits are also significant, Bakkenist said. “The whole concept there is connection.” — Christina Capecchi

Twin Citians to testify in Washington on cutting-edge senior services