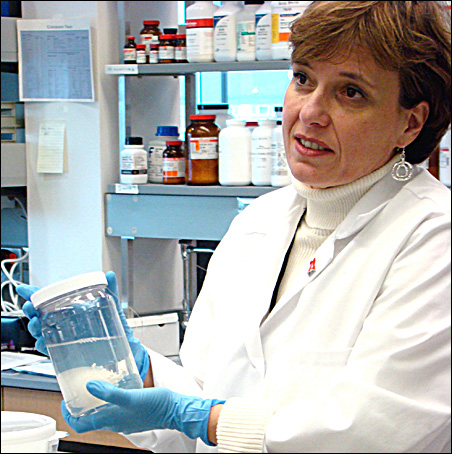 Advancing the day when damaged organs may be repaired or replaced by a patient’s own cells, University of Minnesota scientists have created beating hearts by flushing original cells out of animal hearts and replacing them with fresh healthy cells.

“This is a crazy idea we tried, and we were lucky,” said Doris Taylor, lead scientist on the research, which is published online today in the journal Nature Medicine. Taylor directs the university’s Center for Cardiovascular Repair.

Luck barely describes the discovery other scientists say punches through major barriers to helping the thousands of Americans who die every year awaiting organ transplants.

“It is a significant advance for the field because it takes a unique approach to overcome one of the major challenges with repairing injured hearts,” said Dr. Timothy Kamp, a cardiologist at the University of Wisconsin Madison who has done extensive research on stem cells and the heart.

Other scientists had created heart valves and vessels with the same technique the Minnesota team deployed, called decellularization. And other scientists had learned how to fortify the heart with new cells. But no one had achieved anything close to this scale of large repair grafts, let alone an entire bioengineered heart, Kamp said.

The University scientists have yet to deliver a transplantable human organ, but Taylor said the ultimate goal of the research is to create “new options” for millions of people who live with heart failure and other organ problems. The technique should work with a range of organs, she said, not heart alone.

A prop Taylor uses to explain the research is a jar on her desk holding a ghostly, colorless blob. It’s a pig heart. Look closely, and you can see an intricate structure still intact — tiny vessels, complex valves and walls.

In cellular terms, though, nobody is home anymore. The scientists have washed the heart clean of its original cells. 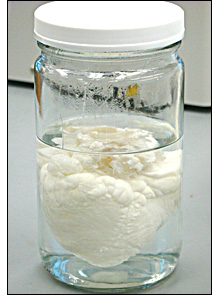 To Taylor, this vacant organ is a scaffold where cellular “carpenters” can begin building a functioning heart with all of its intricate rhythms, chemical synergies and pumping parts. No laboratory could build such a structure as well as nature did. So Taylor and her colleagues essentially co-opted it three years ago.

The research team vacated hearts from dozens of dead rats, using a special detergent to flush away the original cells and then washing the empty vessels with saline solution to get rid of the detergent.

Guided by the basic intuition that often sparks scientific discovery, they decided to inject a mix of heart cells from newborn rats. To the scientists’ utter amazement, the new cells went to work in orderly fashion. Within days, hearts were pumping.

“When we first saw the contractions in the wall of the heart, we were backslapping and filming the hearts to make sure it was true,” Taylor said. “It was one of those moments in life that makes everything worth it.”

Years before clinical use
Nurtured in supportive environments, the hearts passed other tests. The injected cells had formed new muscle in the wall of the heart, relined blood vessels and “made all of the components you would expect to see in a complete heart,” Taylor said. They also expressed proteins that are present in a heart.

While the research reported today focuses on rat hearts injected with ordinary heart cells from newborn rats, the Minnesota team has performed experiments on pig hearts too.

The scientists also have injected organs with stem cells from adults, a significant step toward creating organs that would largely come from a patient’s own body, thereby minimizing rejection problems.

The scaffolding for an organ might come from animals — say, pigs, which already give tissue for human heart valves. But like your skin, which constantly replenishes itself, the heart also has at least some ability to regenerate its scaffolding. So theoretically, a heart functioning with a patient’s own cells eventually would slough off cells in the foreign scaffolding and emerge as an organ the immune system did not see as foreign.

Theoretically, that scenario is realistic, said Kamp, but “it will take years and years before anything along these lines comes into clinical use, if ever.”

Taylor is the first to say the discovery needs testing and extensive research. Among other questions, the Minnesota team is investigating different cell types to learn which cells are most effective in refurbishing different organs.

Any application for patients is likely to come first in the form of heart repair, not transplantation, said Robert Nerem, director of the Georgia Tech/Emory Center for the Engineering of Living Tissues in Atlanta.

Medicine is moving toward a day when transplantation will give way to creative new repair techniques that enable a patient to keep an organ in place, he said.

“Most patients given the choice between a transplanted heart and therapy that will repair their own heart will probably chose to have their own heart repaired, particularly if we move to a point where we can diagnose disease at an earlier stage,” Nerem said.

In that scenario, the discovery by Taylor and her colleagues in Minneapolis could lead to patches that could be used to deliver repair cells to a diseased heart or other organ, Nerem said. “That is significant . . . very exciting,” Nerem said. “Obviously, though, there is more work to be done.”

‘Potential is enormous’
It was no surprise to Nerem and other experts to see the discovery come from Taylor’s lab, even though she credits luck and the six other scientists named on the Nature report.

But this is not the first new ground Taylor has broken.

The University of Minnesota recruited Taylor away from Duke University in 2003, offering her the Medtronic-Bakken Chair in Cardiac Repair, named for Medtronic founder Earl Bakken, who built the first implantable pacemaker.

At Duke, Taylor had shaken conventional medical wisdom by showing in 1995 that heart muscle could be regenerated, at least in some limited capacity. The firm belief had been that a damaged heart was damaged for good, and there was no hope for repairing it. Taylor and her Duke colleagues turned that notion around and set off a race for new heart repair techniques.

This latest discover not only advances that race, Nerem said. It also has the potential to create new organ models for laboratory research and drug testing. Scientists could take an animal heart, he said, repopulate it with human cells and work with “a human model in the lab rather than an animal model.” The result could increase the precision of the research and reduce the need for animals in the studies, he said.

Dr. Francis Pagani, who directs a heart transplant program at the University of Michigan in Ann Arbor, predicted the next step will be a rush to test the Minnesota findings in other labs.

“Other groups will try to repeat her work,” Pagani said. “If it does pan out to be as significant as these findings seem, the potential is enormous.”

Sharon Schmickle covers science and foreign affairs. She can be reached at sschmickle [at] minnpost [dot] com.

Watch a video from the U of M that describes whole organ decellurization.