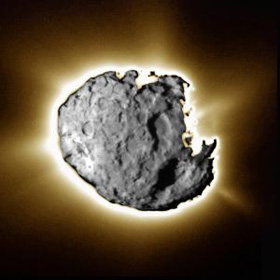 In the infancy of the solar system, rock particles near the sun were bombarded by radiation-propelled gases and hurled hundreds of millions of miles to be trapped in comets, according to new research reported by the University of Minnesota.

University physicist Robert Pepin studied grains of dust from those battered particles to gain new insights into what was happening at the time the solar system was formed. The findings by Pepin and 10 colleagues from Europe and the United States, are reported in today’s issue of the journal Science.

Pepin and other scientists received samples of the dust after NASA’s Stardust spacecraft chased down a comet four years ago and collected dust blowing off its nucleus.

Pepin analyzed two gases, helium and neon, trapped in dust grains so tiny they weighed about a quarter of a billionth of a gram. The research involved heating the grains to 1,400 degrees C to liberate gases that had been imprisoned in the dust specks for eons.

The comet where the dust was collected, Wild-2 (pronounced Vilt-2), formed in the solar system’s icy fringes. What makes the dust fascinating is that it apparently originated close to the very young sun before it was flung out beyond Neptune and trapped in Wild-2.

Keep in mind that scientists are measuring youth on a grand scale.

“The particles probably came from the first million years or even less, of the solar system’s existence,” Pepin said in a release related to the scientific report.

That would be close to 4.6 billion years ago, he said. Translating to a human scale, he said that if our middle-aged sun were 50 years old, then the particles were born in the first four days of its life.

Pepin’s team knew when they got the particles that they had been exposed to intense heat, almost surely within our solar system.

What they discovered was that the particles contained helium and neon in “enormous concentrations,” Pepin said.

The only way that much gas could have penetrated the particles was with intense radiation in “a place close to the sun where there was a lot of energy injected by absolutely immense magnetically driven solar flares,” he said.

True to form in scientific discovery, the findings pose major new questions. Pepin expected the gases to resemble their counterparts in the sun, which have been studied. They were completely different.

“Whatever the source, it wasn’t the sun,” Pepin said. “They look like gases we see in primitive meteorites.”

So somewhere intimately close to the sun, there must have been a “mysterious reservoir,” Pepin said, which was pierced by intense radiation.

From a broad perspective, the findings represent an incremental step toward a better understanding of the earliest stages of the solar system.

“If we establish the starting conditions, we can tell what happened in between then and now,” Pepin said.

Comets, even those far from the sun, have been a source of clues. Scientists think the Wild-2 comet, originated in the Kuiper Belt, a comet-rich region stretching from just inside the orbit of Neptune to beyond Pluto where the temperature is roughly -360 degrees F.

The Stardust spacecraft visited the comet in January 2004, veering as close as 149 miles to the nucleus. It used a contraption resembling a tennis racket to catch the dust. The device featured spongy, ultra-light glass-fiber material called aerogel supported by a framework. At the moment of encounter, the spacecraft exposed the “tennis racket” to a stream of particles blowing off the comet’s nucleus for about 20 minutes. The particles hit the trap at 13,000 miles per hour and split on impact.

After collecting the dust, the spacecraft headed home and parachuted its payload to Earth in January 2006. Pepin received three sub-samples of particles and has more coming.

“This is just the beginning,” he said. “The second round of samples is already awaiting us.”