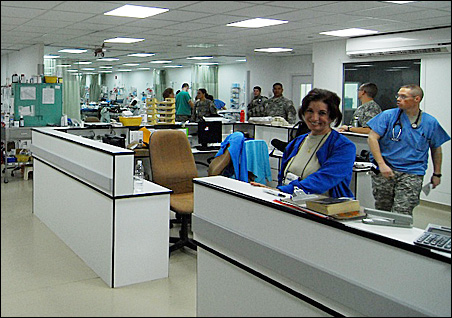 MinnPost photo by Eric Bowen
The intensive care unit of the Balad hospital. On this day most of the patients are children and wounded insurgents.

PAX TERMINAL, BALAD, IRAQ — After almost four years operating out of a collection of tents, the Air Force Theater Hospital in Balad, Iraq, recently moved into a new permanent facility that feels like a small regional hospital in the United States. The floors shine, the light is bright, and the expansive nurses’ stations could be straight off the set of “ER.”

Last year when I flew through Balad air base, the passenger terminal was a pleasant but obviously temporary plywood building. Ten months later the shiny new passenger terminal, where I wait for my flight to Kuwait, would be the envy of some third-tier feeder airports in the United States. Soldiers watch several networks on 50-inch plasma TVs as they wait for their flights. And while there is still a pallet of Meals Ready to Eat (MREs) in the corner, it’s a short drive to Taco Bell, Burger King or Subway.

Most soldiers live two to a room in comfortable prefabricated steel buildings that have heat and air conditioning with clean bathrooms and showers a short walk away outside. I was provided with a single room with a shared bathroom in a new block of two-story prefabricated apartment buildings. Soldiers with administrative jobs are working out of comfortable offices that feel fairly comparable to what they might expect at a base in the United States.

(It’s important to keep in mind that I’m referring to conditions on major bases in Iraq, which are markedly different from the living conditions for tens of thousands of combat soldiers — who put themselves in harm’s way every day — on small Forward Operating Bases spread throughout Iraq.)

U.S. future in Iraq?
As I leave Iraq for the second time in less than a year, I’m contemplating what, if anything, I’ve learned from this experience. Are there any conclusions I can draw about the course of the war, or the future of the U.S. involvement in Iraq or the future of the Iraqi people?

At the highest levels of our government there is no official vision for how long we will be in Iraq. But the facts on the ground in Iraq seem to show that individual agencies and local commanders have drawn their own conclusions and are planning for the U.S. military presence to last indefinitely.

When asked how long they think the U.S. presence might last, individual junior officers and soldiers I spoke to in Iraq and Kuwait speculated that we might be there for 10 to 20 years, or more. This mentality is resulting in a marked transformation on major bases in Iraq from the feeling of a combat zone to the feeling of a stateside garrison.

Soldiers shake their heads at the proliferation of new rules that seem to appear daily about things like speed limits, dress codes and other minutia that seems out of place in a war but would be typical of a major military base in the United States. The recent rule in Balad that was most reviled by almost everyone I talked to was the outright ban on male soldiers entering female soldier quarters, and vice versa.

Like a tour in Korea
I think the U.S. involvement in Iraq can be compared to a complex ecosystem with thousands of organisms all working somewhat competitively on their own private agendas. The key point about a complex ecosystem is that there is no single commander who is really in control. The ecosystem is self perpetuating and the momentum of organic growth drives major changes despite a lack of strategic direction.

There is a definite sense that for support soldiers in genuinely non-combatant roles, a tour in Iraq is becoming more like an unaccompanied tour in Korea than a combat tour in Iraq that was typical just a few years ago.

And so while presidential candidates posture and the House and Senate pass resolutions and periodically make empty political threats to cut funding for the war, the Army and other federal agencies in Iraq, in the absence of clear executive leadership, are making individual decisions on the ground that presume a permanent U.S. presence.