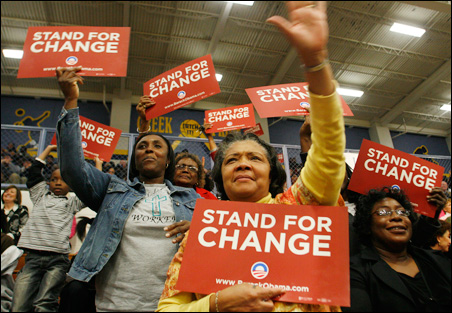 Will Bill Clinton, campaigner in chief, and Barack Obama stop feuding? Will John Edwards, a son of the South, survive to fight another day? And, perhaps most important, will the fact that about half the Democratic electorate is African American ensure a victory for Obama, who until now has not stressed race issues? These are the important subtexts for the South Carolina Democratic primary Saturday, the first Southern contest for Democrats on the road to the White House.

Most polls are showing Obama with a double digit lead over Hillary Rodham Clinton with Edwards in third place. Earlier this week Obama led Clinton among African Americans by 65 to 16 percent.

“It could be the calendar, the electoral map or the recent flap between the Democratic front-runners. But the senator from Illinois is being forced on the campaign trail to address America’s racial inequalities more directly and more often than before,” wrote Maria L. La Ganga in the Los Angeles Times. She noted that Obama has always campaigned “beyond race,” in what Susan Carroll, a senior fellow at the Rutgers University Center for American Women and Politics in New Jersey, calls “an incredible balancing act.”

The Times recounted a scene at a town hall meeting in which a 45-year-old African American lab technician asked Obama how to convince her 77-year-old father that Obama could be effective as president. “The barriers are inside our own heads,” Obama said to the largely black audience. “I don’t want to perpetuate this notion in our kids that there are limits to their dreams…Tell your father that he’s got to be making sure he’s not passing on that mindset to his grandchildren.”

The British Telegraph put the election in historical terms. Quoting 81-year-old Blanche Watts, an African American, “I never believed I’d live to see it even if I got to be 181. We can elect the first woman president or we can put a black man in the White House. Either way, it’s history.” She told the paper she was undecided.

Race is still a factor
But at least one commentator bemoaned what he sees as the media’s focus on the race issue in South Carolina. “Being a black man, I don’t mind talking about the nuances of black politics….but I can also count. And to suggest that white voters are immaterial in South Carolina is nuts,” wrote Roland S. Martin on the CNN web site.

The race issue is also one of points of contention between Obama and the Clinton campaign, with former President Bill Clinton defending himself and his wife against accusations that they had injected race into the South Carolina campaign. The former president, who himself won a primary in South Carolina in 1992, contended that Obama had put a “hit job” on him and was “feeding” the media to keep the race issue alive, The New York Times reported. “Clinton suggested that his wife might lose here because of race. Referring to her and Obama, he said, ‘They are getting votes to be sure, because of their race or gender and that’s why people tell me Hillary doesn’t have a chance to win here.'”

By having her husband campaign in South Carolina early in the week following Monday’s debate, Hillary Clinton is “essentially ceding the state to Obama,” according to Time, while she spent time campaigning in Super Tuesday (Feb. 5) states such as California and Arizona. A major disagreement revolved around Obama’s comments last week that the Republican Party was a “party of ideas” for the last 10 to 15 years. The Clintons took that as a slap at the Clinton years and attempted to say that Obama somehow supported the Republican platform. “Obama spent the day on the defensive, growing visibly frustrated at times with the Clintons,” Time said. For his part, the former president said that “we’re going to have a few arguments — this is a contact sport. Sometimes when you have a family feud it’s harder than when you have a feud with someone in a different clan because you have to dig deeper to find where the difference is.”

But the former president’s role as surrogate campaigner has caused a stir. ABC’s “Nightline” Thursday devoted a major segment to his campaigning, his comments and his spats with reporters. And The New York Times, while endorsing Hillary Clinton for the Democratic nomination in today’s newspaper, was critical of Bill Clinton:

“As strongly as we back her candidacy, we urge Mrs. Clinton to take the lead in changing the tone of the campaign. It is not good for the country, the Democratic Party or for Mrs. Clinton, who is often tagged as divisive, in part because of bitter feeling about her husband’s administration and the so-called permanent campaign. (Indeed, Bill Clinton’s overheated comments are feeding those resentments, and could do long-term damage to her candidacy if he continues this way.)”

Edwards needs a major upset
Meanwhile, Edwards, a native of South Carolina and a former North Carolina senator, can only watch and try to get a word in edgewise, much as he did at Monday’s debate. The next day on a campaign stop, he said, referring to the debate, “You know, between all the allegations of Hillary serving on the Wal-Mart board and Senator Obama working for a slumlord, I was proud to represent the grown-up wing of the Democratic Party last night.”

Edwards continues to push his populist message in a state hurt by losses in the textile industry, but “unless he can score a major upset…pressure undoubtedly will grow for him to pull out of the race,” said Lee Bandy, a veteran South Carolina political reporter in the Mercury News (registration required).

Obama is counting on voters in South Carolina and in upcoming primary states agreeing with the sentiments expressed in an endorsement in the state’s largest paper, The State in Columbia. The paper said that “Sen. Obama’s campaign is an argument for a more unifying style of leadership. In a time of great partisanship, he is careful to talk about winning over independents and even Republicans…He’s not neglecting his core values; he defends his progressive vision with vigorous integrity. But for him, American unity — transcending party — is a core value in itself.”