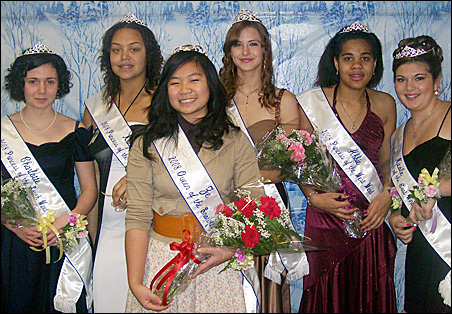 Photo Courtesy of St. Paul Parks and Recreation Department
Ze Thao, third from left, was chosen Queen of the Snowflake. The other members of the Winter Carnival junior royalty are, from left, Charlotte Edminster, Kaujah Iverson, Julia Roberts, Abbie Speller and Nicole Kapaun.

For years, one of the goals of the St. Paul Winter Carnival has been to diversity its audience, but it’s been an elusive goal.

Leaders have long tried to erase a perception that Carnival activities are a bit of a closed society, reserved for those whose families or friends have longstanding ties to the midwinter celebration. Indeed, it’s not unusual to find volunteers and royalty who are second- and third-generation Carnival folk.

And, it’s been argued, that’s been responsible for much of the festival’s longevity, having been founded in 1886 to dispel the notion that St. Paul was a cold Omaha. Or cold Siberia, as was more likely comparison at the time. The multi-generational aspect meant there were always dedicated volunteers willing to brave the cold to build ice castles, organize contests, work at parades and attend meetings.

But as demographics changed, carnival officials realized they need to tap into the wider, more diverse population.

Carnival tries diversity outreach events
Recent carnivals have featured cultural and ethnic events, dances and music as ways to draw the fast-changing St. Paul demographics into the Winter Carnival spirit. There has been some success, but there’s no doubt that the carnival core remains snow white.

So it was a bit of a breakthrough this year, when Ze Thao, an eighth-grader at Ramsey Junior High, was selected Queen of the Snowflake from a field of more than 20 girls in the Winter Carnival Junior Royalty pageant. (Carnival officials said that this year’s competition was all-female because of a lack of male applicants.)

On Thursday, Winter Carnival director Kate Kelly said that, to her knowledge, Ze Thao is the first Hmong person to be in the carnival royalty, albeit the Junior Royalty. On Friday, however, officials of the city’s parks and recreation department, which coordinates the competition, said that a Hmong girl had been selected for the junior royalty about 20 years ago. No details were immediately available, however, because of changes in record-keeping.

Nevertheless, Ze Thao’s selection is “a good step in the right direction [towards bringing more diversity to the carnival],” Kelly said. “And it’s fascinating when you see the large population of Asian children in the St. Paul schools.” About 30 percent of St. Paul public school students are of Asian ancestry.

Ze Thao and five other junior royals will make appearances throughout the Winter Carnival, which runs through Feb. 3. They’ll also appear around town throughout the year.

Kelly said efforts to get African-Americans and Latinos involved in Winter Carnival activities have slowly borne fruit in recent years. Hmong and other Southeast Asian residents of St. Paul, though, have been a tougher sell.

“I’m not sure why,” she said. “It must be the cultural differences.”

The Junior Royal Court
The new St. Paul Junior Royalty, who serve as representatives of the city’s parks and recreation department, are: