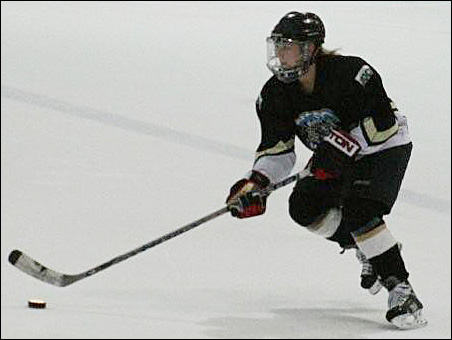 Photo by Neil Negstad
Natalie Darwitz, of Eagan and the University of Minnesota, is a two-time Olympian.

The roster of the Minnesota Whitecaps, the sole American entry in the five-team Western Women’s Hockey League, reads like an honor roll of the sport’s top names. Six players, five Americans and one Canadian, own Olympic medals. Five others have U.S. National team experience. All 25 played collegiately, with seven NCAA championships.

Now in their fourth season, the Whitecaps are the team of choice for American women who have exhausted their college eligibility but hope to make the 2010 Olympic team. And this season’s squad, with Harvard graduates Angela Ruggiero and Julie Chu joining such Minnesota products as Natalie Darwitz and Jenny Potter, might be the best yet.

So why was Jack Brodt — the team president, co-founder and, sometimes, coach — so glum after a recent game at the Inver Grove Heights Arena? The Whitecaps had lost to Edmonton in overtime, 4-3, and Potter, already playing with a slight shoulder separation, suffered a high right ankle sprain. But those were minor compared to what really irked him.

After struggling financially from Day One, the Whitecaps find their future suddenly in danger from a source they never expected — hockey’s national governing body.

As Jay Weiner reported for MinnPost.com on Jan. 14, USA Hockey is finalizing plans for a national residency camp this fall based at the Schwan Super Rink in Blaine. What this means for the Whitecaps remains unclear, but Brodt doubts a beneficial partnership is part of the plan.

Jim Johannson, USA Hockey’s senior director of operations who confirmed the story for Weiner, would not address the specifics this week. He referred questions to media relations director Dave Fischer, who insisted nothing had been set — not the roster size, not the start date, not even the camp’s location. Fischer said to expect an official announcement in about a month.

Unexpected jeopardy for the Whitecaps
Of the 56 players invited to USA Hockey’s holiday camp last December, six were Whitecaps — defensemen Ruggiero and Chu, forwards Darwitz, Potter and Jessica Koizumi, and goalie Megan Van Beusekom. Because USA Hockey has never helped the Whitecaps financially, Brodt expects it to simply take his best players and leave the Whitecaps scrambling to field a team.

And after four years of barely breaking even, would Brodt and his investor partners even bother?

“If USA Hockey does that, I don’t know what happens to us,” Brodt said. “Our players signed two-year contracts. We’d probably release them if that’s what USA Hockey wants to do. 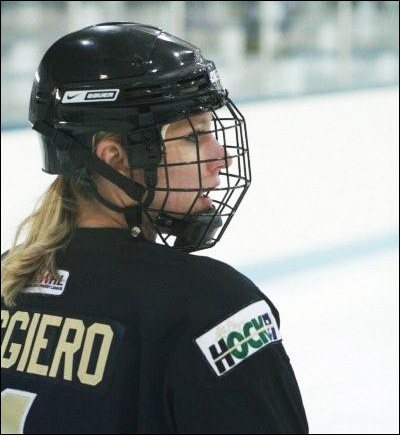 “Instead of helping us, USA Hockey by doing that is putting us in a really bad spot, obviously. But they probably don’t care anyway.”

Brodt and Dwayne Schmidgall originally founded the Whitecaps because their daughters, Winny Brodt and Jenny Schmidgall Potter, needed a place to play after college, as did several of their friends. (The two played at the University of Minnesota before Potter transferred to Minnesota-Duluth.) Brodt and Schmidgall were among 10 investors who contributed $2,000 each for the first two seasons.

The organization is as grass roots as it gets. None of the Whitecaps’ few staff members draws a salary. Neither do the players, who instead pay $500 to $1,000 to help defray expenses. They can earn some of that money from sponsorships or by selling ads in the Whitecaps program.

Ruggiero and 2006 Olympian Kristin King, who live out of state and fly in for games (King is finishing her master’s work at Ohio State), pay their own travel expenses to Minnesota.

Attendance is sparse, even though tickets are remarkably cheap ($10 or less a game; $120 season ticket for 13 games) And publicity for the team is scarce.

At Inver Grove Heights, about 200 people — many of them kids who played in a tournament at the facility earlier in the day — watched the Whitecaps lose to Edmonton. But that’s better than some teams do. Last year, during an injury stoppage at one of the championship games in Calgary, Brodt said he counted 54 people in the stands.

And the logo, which shows a hockey-playing puck riding a wave of water? Forward Brooke White’s father designed it, for free. 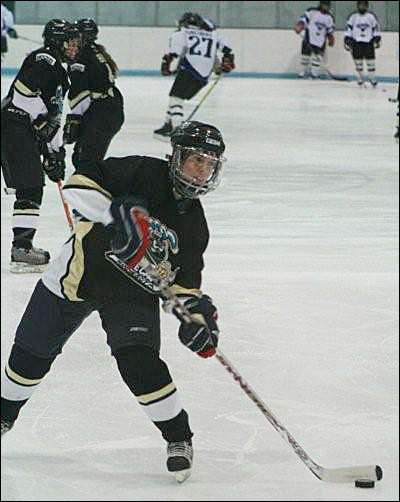 Photo by Neil Negstad
Jenny Potter, the three-time Olympian from Edina and a mother of two, lines up a shot in warm-ups.

“We’re trying to provide a high level of hockey for post-collegiate women,” Brodt said. “That’s our only goal. We’re not in it to make any money, or to build a franchise and get a ton of money for it. There’s no money to be gotten.”

Last year, when five investors dropped out and team needed $10,000 to get through the season, Dwayne Schmidgall reorganized the Whitecaps as a nonprofit. Operations manager Kristie Minkoff eliminated the team’s biggest expense, ice time, by finding youth organizations to sponsor Whitecaps games as fundraisers. The organizations keep the gate and concession receipts in exchange for free use of the building.

“Kristie is the one who really makes it work for us,” Brodt said.

Whitecaps face struggle staying above water
Still, with road expenses for hotels, plane tickets and such, it’s a struggle. “Our balance sheet is not the greatest,” Brodt said. “We’re trying to get through every single year and pay all our bills. We’re right on the cusp.”

USA Hockey prefers to assist individual players and not teams, which annoys Brodt, since the Whitecaps provide Olympic hopefuls a valuable competition outlet they can’t get elsewhere in the United States.

The opportunity to play in a top women’s league without going overseas is why Chu, a two-time Olympian, sought a job in Minnesota. She found one, as an assistant coach for the University of Minnesota-Duluth women’s team. Chu and Caroline Ouellette, the other assistant and a two-time gold medalist for Canada, carpool to play for the Whitecaps when Duluth’s schedule allows.

Ruggiero, who already owns gold, silver and bronze Olympic medals and hopes to earn a fourth, signed up for the same reason. “I looked at the roster and said, ‘That’s where I need to be this year,’ ” Ruggiero said in a telephone interview. “I thought it was the perfect thing.”

Last season, Ruggiero worked for the New York Islanders and trained on her own but said she noticed “a huge difference in my performance.” Before the 2006 Torino games, she had played for Montreal in the National Women’s Hockey League, based in Canada’s Eastern provinces. That league disbanded briefly last year before reforming in time for this season.

But even under more stable conditions, Ruggerio wasn’t interested in going back to Canada. Rosters are limited to four players from outside a team’s home province. And Canadian labor laws make it nearly impossible for Americans to find work. Ruggiero knew Winny Brodt and Potter from the national team, and they sold her on the Whitecaps.

The residency camp, in theory, appeals to Ruggiero. As Ruggiero understands it, the residency team would play a demanding schedule of games against women’s collegiate and men’s junior teams from the Upper Midwest.

“A lot of girls retire when they’re 22,” Ruggiero said. “It’s hard to put everything on hold and train for hockey. It’s great that USA Hockey is taking a step to combat that issue.”

Some players think USA Hockey should incorporate the Whitecaps into the program, perhaps lending players to the team for the WWHL games, or taking over the franchise altogether and expanding the schedule. But Brodt doubts that will happen, leaving the future of the Whitecaps to be determined.